The Bobcats put in another "Three great quarters, one quarter that will leave a bad taste in your mouth" game and gave up a late lead to the reigning two-time champs. Good job, good effort.

Share All sharing options for: Bobcats take Miami to the edge but lose the handle in 99-98 loss

Luck is a fickle thing.

The Bobcats were up 14 points with about nine minutes left in the fourth quarter. Much of their lead on the two-time defending NBA champions came at the hand of some of the least efficient shots possible: midrange contested jump shots. The level of difficulty was high, especially for a team that struggles to knock down jump shots. The Bobcats are 11th-worst at shots from 15-19 feet out with a 37.6 shooting percentage from there normally. They're also worst at shots from 20-24 feet out at a striking 28 shooting percent. It was a special time indeed.

And then it all came crashing down. Suddenly a wealth of luck became absolutely no luck. Or perhaps there was no luck in the first place but just success in the face of statistical improbabilities.

Anyway, Miami's resurgence (which I would say is clearly more of what happened than Charlotte's collapse) had little to do with being lucky. The final nine minutes of the game were disturbingly methodical as the Heat took a 14-point deficit and turned it into a four-point lead.

It started with a Michael Beasley offensive rebound and subsequent putback and a Charlotte turnover that immediately followed. Then LeBron James drove past Michael Kidd-Gilchrist for a layup and drew contact for an and-1 opportunity, which he completed. Norris Cole capped a 7-0 run that halved the Bobcats' lead with a jumper in transition off a Josh McRoberts miss.

The Bobcats countered with a nice pick and roll move with Kemba Walker drawing the double-team only to dish to Al Jefferson for a jump shot. Unfortunately for Charlotte, Miami countered that with a LeBron James corner 3-pointer. The Bobcats tried to regain a little lost ground with a baseline Gerald Henderson jump shot that had found the net in the third quarter. But this was not the third quarter and the shot did not find the net. Back to the drawing board.

A little bit later, the Heat continued to gnaw at the lead. Mario Chalmers hit a three off a crisp pass from LeBron with the defense unable to cover. Chris Bosh had a couple free throws and a dunk.

The Bobcats fought back with an isolation for Al Jefferson on the left wing that consisted of mostly jab steps and pump fakes. It ended with a bricked face-up jump shot.

The lead was gone and suddenly the Bobcats were fighting to stay with the two-time defending champions on the road after kicking sand on them for the entire third quarter.

Unfortunately, that would be pretty much it for the Bobcats. They tried to get their offense going but could not find any opportunities against a much tighter Miami defense other than contested jumpers.

The game would be sealed with a Walker turnover and a Chalmers fast break dunk. The Bobcats were now down four points but it was too late. They cut the lead to two after a quick Walker layup but their only option was to foul LeBron and to send him to the free throw line after a failed steal attempt.

Time evaporated as the Bobcats tried to turn a four-point deficit into, well, anything. Kemba Walker was fouled with 0.7 seconds and sent to the line for three free throws but made the final one (he intended to miss to give the Bobcats a putback opportunity) and that was it.

The Bobcats early play was marked by their terrific defense and struggling offense. Charlotte held the Heat to their pace, keeping Miami from getting into transition much. Offensive woes held Charlotte back as Miami jumped out to a 10-point lead in the second quarter. But the waning offense regained energy on the back of Ramon Sessions' efforts to get to the rim and the charity stripe. An increased aggression from Gerald Henderson helped and the defense followed through on its end to turn a 10-point deficit into a one-point lead in a matter of six minutes.

The third quarter was just a thing of beauty. Or perhaps statistical anomaly. Whichever, I wish it would happen more. Just look at this shot chart. 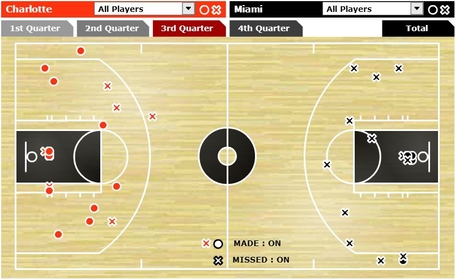 The Cats opened the third quarter with a 6-0 run to stretch the one that finished the first half to 24-7 from that initial 40-30 Miami lead. The Bobcats made a ton of shots. Gerald Henderson had eight points and Walker had seven in the quarter. At one point the Bobcats reset a possession after an offensive rebound and had some massive mismatches in the frontcourt. They couldn't manage to get the ball to those players but instead for a contested midrange jumper from Walker. The shot was money and Walker drew the foul. The Bobcats made the Miami Heat look foolish.

But the fourth quarter was a different beast, which I already went over in detail. The Heat aren't world-beaters for no reason.

Miami never looked panicked despite down double-digits at home to the Charlotte Bobcats. They trotted out a lineup of Norris Cole, Mario Chalmers, Dwyane Wade, LeBron James and Chris Bosh and proceeded to show just about the powers of three capable offensive workhorses with two marksmen at their side.

To Charlotte's credit, their defense didn't crumble, but it simply got outworked and outplayed. On the first Chris Bosh 3-pointer, Dwyane Wade drove cross court from a little beyond the left elbow towards the free-throw line. Chris Bosh was stationed at the top of the key behind the three-point line and LeBron James was standing near the right wing. This drive drew Al Jefferson to help stop Wade's penetration, leaving Bosh alone. Michael Kidd-Gilchrist could have rotated from LeBron James, but do you really want to let LeBron James go into free territory without anyone guarding him? Regardless, the shot fell. Bosh hadn't hit a single 3-pointer in the previous four games.

The successive Bosh threes were more of the similar smart plays by the Heat to draw the Bobcats defense away from Bosh on the perimeter.

I don't have any issue with the above defense. Jefferson helps to close off the baseline and the Bobcats seem to have Wade's passing angles shut down. But it seems the Bobcats crept in a bit too much and wandered, giving up space for an easy cross-court kick-out to Bosh for the three (below).

The next Bosh three didn't go so well either (below). All five Bobcats had a foot in the paint against a Heat lineup featuring all players with three-point shooting percentages at or above 40 percent. Henderson closed out on the Wade baseline drive from his defender who's in the opposite corner. But Jefferson is also there to provide support and the rest of the Bobcats aren't within six feet of their opponents. The lob kickout comes to Bosh, who hits the dead-on three. Charlotte was out of position and swiftly exploited for the maximum Heat benefit. That's why they're the two-time defending champs, I suppose.

There was a little controversy with Norris Cole, who showed a fine example of how to be an offensive lineman in the NFL. Mario Chalmers received a tipped defensive rebound from the perimeter and sprinted off in transition with Norris Cole and Kemba Walker in front of him. Cole took out Walker in a collision that sent Walker to the floor.

No foul was called and Chalmers had the open dunk.

The Coledozer incident was the only thing I particularly had any issue with and I'm not about to put the loss on that. The Bobcats ended up with three more free throw attempts than the Heat did at home. Here's the thing: If you're up double-digits on the road with under 10 minutes left, you make your own luck. The Bobcats could not hold on to their lead and Miami executed pretty much to a T. Even with Al Jefferson, Charlotte's still a young team and with that inexperience comes the struggle to keep leads.

They've made progress in maintaining late leads against lesser teams but when facing squads that have the talent to go to the Finals or close to it on a yearly basis, the Bobcats have to work that much harder and it's that much more difficult to keep a saddle on a bucking bronco.