Cody Zeller's selection at this year's draft wasn't well-received by Bobcats fans this summer. Was that warranted? How has he played so far, and how has his role helped or hurt the Bobcats?

It’s not often you see a rebuilding franchise only end up with one draft pick in a year where the second-round draft pool is pretty deep, but that’s where the Bobcats were in the summer of 2013 after trading away their second-round pick for Byron Mullens two years earlier. That makes Cody Zeller the only rookie on what’s turned out to be a surprisingly adequate Bobcats team. Their overall youth, combined with the fact that this was, again, supposed to be a rebuilding year, cast a bit of a spotlight on Zeller entering the season.

So far, it’s been a rough season for the 21-year-old center out of Indiana. Playing in a bench role due to inexperience and relative depth at the position, his averages of 5.1 and 4.2 points and rebounds per game rank pretty low on the team. Even when adjusting for playing time, Zeller averages only 10.4 points per 36 minutes. His rebounding numbers begin to look better at 8.5 per 36 minutes, although this is still only good for fourth on the team.

Individual statistics do show him adding an impact to the effectiveness of the Bobcats bench on defense. He blocks an adequate amount of shots for a big man, and his individual Defensive Rating (points allowed per 100 possessions) is 100, good for fourth on the team. While head coach Steve Clifford probably doesn't quite trust giving Zeller many minutes at the center position in a rim protector role quite yet, he’s been handling his defensive duties pretty well so far. I’ll break down his defensive impact a bit further later in this post, but it’s important to know that Zeller’s impact is far from just negative.

That being said, his lack of offensive contribution likely outweighs his defensive efforts. His raw FG% is 38.8 percent, worse than any Bobcats player (minimum 100 minutes played) except for Ben Gordon, and his True Shooting percentage and Effective Field Goal percentage are 43.3 and 38.8 percent, respectively, which are the worst marks on the team. His raw offensive rating is 85, tied for second-worse with Ben Gordon (SOME PATTERNS ARE EMERGING), and well below the team average

So what’s wrong with his offensive play? To be fair, I guess you can start with the part where he has trouble hitting any shot. If you go by the three basic zones for inside shots (at the rim, mid-range, and long twos), Zeller’s shot chart is very, very red. Mullens-esque, in fact. 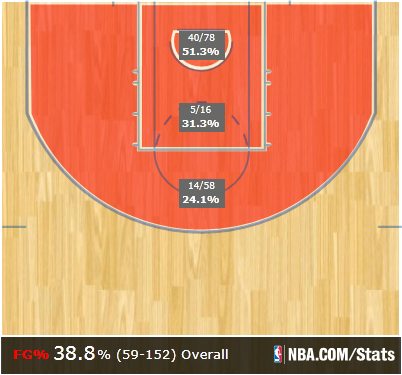 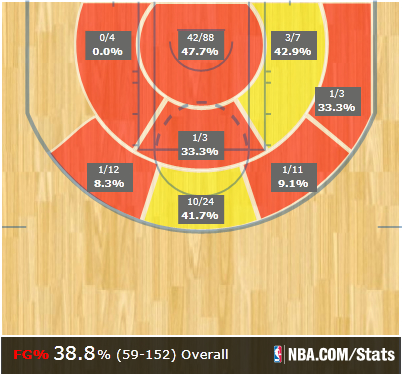 If you look at his shot chart in a little more detail, there’s two things that really stand out. The first is how much he struggles with close shots, converting shots within eight feet of the rim at a 47.7 percent success rate, well below league average. The second is that the area where he shoots the second-most, outside of around the rim, is the spot commonly referred to as the most inefficient shot in basketball: the 18-to-24-foot jumper at the top of the key. This, ironically, is the area where Zeller has the most relative success, as his 41.7% success rate from this spot is around league average. Of the zones from where Zeller has taken more than 10 shots, this is actually the highest relative success he has. The current lack of low post finishing skills combined with only finding his rhythm from a spot that doesn’t offer much in the way of offensive production to make the offensive struggles we see currently. On the bright side, his usage rate is relatively low at 18.9 percent, but that figure is still considerably higher than that of more efficient teammates, such as Michael Kidd-Gilchrist and Josh McRoberts.

On the other end of the court, Zeller's defensive impact can be driven by the lineup he's playing with. Going by a two-man system, Zeller plays very well with Jeff Adrien and certain perimeter defenders, while a combination of Zeller and Gerald Henderson or Kidd-Gilchrist has resulted in poor defensive team play. Some of the lineup data may be accountable by small sample size, but this does make sense. In particular, Adrien's physicality is a strong complement to Zeller's lateral quickness, and Henderson's occasional tendency to let defenders by him allows ballhandlers to prey on Zeller's inexperience with the professional game.

I watched a lot of video on Zeller thanks to the indispensable NBA.com/stats, and it seems more and more like he has been coming into his own on defense. One takeaway from his game tapes is that he's learned how to assert himself defensively in more areas than one. At the beginning of the season, the vast majority of his shot alteration was coming on help defense, as one might expect with a quick center playing in his rookie season. However, more recently, including Friday's game against the Pistons, Zeller has began to play considerably better in transition and in isolation defense.

It's possible what we saw from Zeller for most of the season was just some rookie inexperience, because it definitely looks like he's improved recently. The offensive issues are still there, and they will probably be seen for most of the remainder of the season, but shooting range and ability can be improved. Zeller's already figured out a way to make his defensive quickness into an asset at the professional level, and it might only be a matter of time before he utilizes his post moves and finishing skills the same way. Zeller will be asked to play a bigger part on the team as his skills expand, but for now, he fits his particular role fairly well.