In the first of a two-part series on the Bobcats' early performance from the guards, let's break down Kemba Walker's offense and the results.

After an offseason that saw the signing of the biggest free agent in Bobcats history to plug their biggest hole in frontcourt scoring, the general thought process was that, at the least, the Bobcats returning backcourt had gained room to breath offensively now that opponents' defenses couldn't solely focus on Charlotte's backcourt.

A dropoff for the Bobcats' two top scorers in 2012-13 wasn't quite a thought beyond consideration, but watching both guards hit under 40 percent of their field goals in the first 18 games probably surprised more than a handful of fans after Kemba Walker and Gerald Henderson had career seasons.

Well, guess what -- it's happening.

By pretty much any metric you want to look at, the Bobcats starting backcourt of Kemba Walker and Gerald Henderson are coming up well short of not only expectations or hopes, but also their performances only one calendar year ago. Walker's PER has dropped 17 percent so far and Henderson's has fallen 17.7 percent. Name any basic category of shooting percentage -- field goal percentage, three point percentage, free throw percentage, true shooting percentage, effective field goal percentage -- they're all down from the previous season and their career averages, unless you're particularly keen on how Gerald Henderson's matching his career free throw percentage.

Today we'll start with Kemba Walker and in a day or two, the second part featuring Gerald Henderson will be up.

Walker's fall as a scorer is particularly bad if you focus on his four percentage point drop in field goal percentage, but when looking at his efficiency, it's not as dramatic thanks to his three-point shooting. Though it's worse, too, it's a smaller disparity than his general field goal shooting and he's taking threes more, which at least lessens fall in scoring efficiency. So although his points per possession has fallen significantly (from 0.91 PPP to 0.84), it's not as bad as it could have been. If you look at per game or per 36 minutes statistics, however, his scoring will appear even closer because he's taking more shots per game.

So if his three-point shooting hasn't changed much on the surface, what has?

This is clearly a multifaceted answer that can't be summed up neatly. To start, we can look at how Walker's getting his offense.

It hasn't changed a whole lot, really. The majority of Kemba's possessions are still in the following four categories: isolation, pick and roll, spot up and transition, which combine for 80.9 percent of his possessions this season. That's down from 86.5 percent last season, which pretty much spread to more off-ball opportunities (cuts, hand-offs, off screen shots).

Shall we look at the good news first? The good news is that Kemba's performance out of isolation towers over his previous season. Now at 1.15 points per possession, up from .82 PPP, Walker's fifth-best in the NBA. The most significant improvements in this area is clearly his three-point shooting and turnover rate. Last season he shot 29.4 percent on threes in isolation, and 23.6 percent of his isolation field goals were three attempts. This season so far, that's up to a 50 percent completion rate with 35 percent of his isolation field goals from behind the arc. He's also shrunk his turnover percentage from 9.1 percent of the time in isolation to 2.1 percent. On a game-by-game scale, that's not a huge deal considering isolation plays comprise nearly 12 percent of his total possessions, but that's about two or three possessions a game in isolation now minimizing errors and maximizing efficiency.

OK, I'm sorry to say that's about it for the good news for the major components of Walker's offense this season when breaking down by his preferred play types.

Pick-and-roll plays make up the largest portion (36.8 percent) of Walker's offense, not that that's any bombshell. But despite a slightly decreased turnover rate, he's struggling to score this year. His three-point shots off the pick-and-roll are down and his percentage there is down too. But a lot of his offense in the pick and roll misdials in the midrange. If he hits those shots, great, but too often it's been like Wile E. Coyote running towards a cliff and then willingly seeing the demise through to the end. The level of difficulty is high for a bunch of those midrange shots and one can't help but think the Bobcats' offense could manage to be more efficient if Kemba picked his spots better with midrange shots. Too often he's over penetrating and forcing himself into shots closer to the baseline. It's not just a midrange thing either, as Walker's poor shooting extends to shots at the rim. He hasn't been drawing fouls at the same rate either, down 3.5 percentage points in the pick-and-roll to a paltry 2.7 percent.

His spot-up and transition problems are much more simple. As for the former, Kemba could solve that with plain old-fashioned better shooting. He shot 37.6 percent on spot-up shots last season, but that's plummeted to 27.8 percent. The distribution has changed in that Walker's taking much more of his spot-up shots from behind the arc (74 percent) but he's only connecting on 30 percent of those.

Transition scoring opportunities are down for Walker and for the team across the board due to Clifford's slower pace and more deliberate use of half-court possessions. Though Kemba's scoring isn't way down in transition (just 0.7 PPP), he's not drawing fouls as much and the biggest concern is that his turnovers in transition are way up. Due mostly to poorly-conceived passes that miss their mark or dribbling errors, Walker's turnover percentage is up to 18.3 percent from 10.7.

Hey remember when we mused that with a dynamically better frontcourt, Kemba could vastly improved his passing numbers? Well, that's not looking so hot right now.

Not only is Walker taking more shots than last year, but his assists have steeply dropped to career low rates in assists per 36 minutes and in assist percentage (2012-13: 31.2 percent // 2013-14: 24.9 percent). Per the NBA's Player Tracking technology, Walker leads the league both in touches and in passes. It's just that the ball either comes back to him in the possession or the passes don't lead to scoring trips.

Charlotte's offense likes to create opportunities from motion and off-ball movement, using big men as pivots in the system due to Josh McRoberts and Al Jefferson's respectable passing abilities. With Charlotte's dearth of shooting talent, the team doesn't run a very traditional offense as if Walker's a pure point guard but often it's more with him as a dual threat, which often features him in a scoring role and the distribution as more of a team effort. The result is a lot of isolation for everyone because of this lack of outside shooting to space the floor and keep passing lanes open. Assists come on cuts and on jump shots, but those are rare when the jump shooters aren't great and the paint is clogged by just about everybody else. Walker certainly isn't absolved of blame, but we cannot act like some of the lack of assists derive from a roster with inherent poor spacing because of overlapping weaknesses.

Anyway, Walker's passing has still been a rough spot on the whole so far, spacing or not. He still gets a ton of his offense in the pick and roll, a play that revolves around exploiting even the smallest tears in a defense and breaking them down for scoring opportunities for the ballhandler, the roll man or a spacing player either cutting or stepping out for an open jump shot to take advantage of a rotating defense's gaps. Walker clearly hasn't done great as a passer in this area. 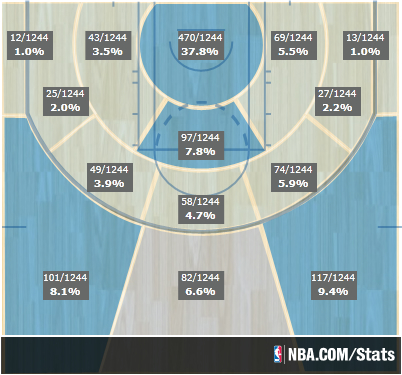 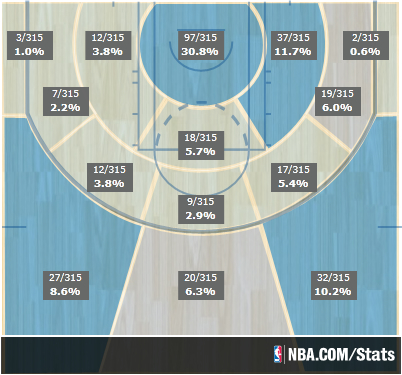 Using the first two charts, Walker's shots in the paint have fallen from 45.6 percent of his total shots to 36.5 percent, with the more significant drop-off closer to the rim. Kemba's also found himself scrambling towards more right baseline midrange jumpers, a tough location for him. He's done better than years past scoring in that area, but it's coming at the cost of shots at the rim, which could pay off even further with drawn fouls and free throws. Below are his performance in these zones. 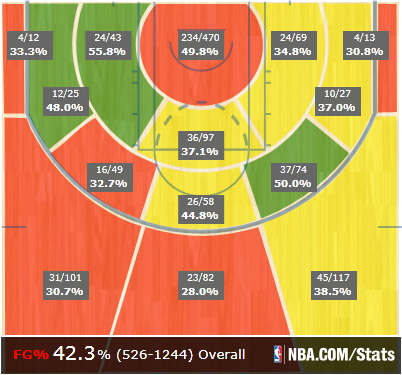 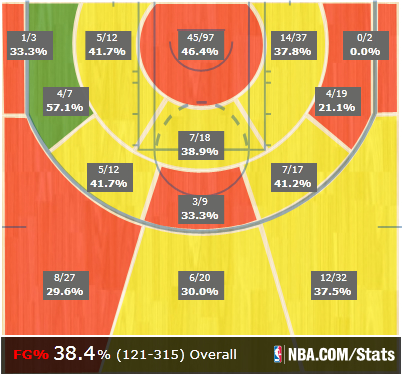 Turning the ship around

This has not been a complete season-long trend, however, and some nuance must be articulated.

The Bobcats had been inconsistently working talented big man Al Jefferson back into the starting lineup for the first 12 games, only to pull him for games at a time due to arthritis issues hampering his ankle sprain's healing process. The Bobcats managed to work Jefferson into the lineup with missing much a beat on defense because of a simplified defensive schemed that has Jefferson playing back on pick-and-rolls to stop shots at the rim and clog the middle of the floor. But offensively, they've been mostly disjointed, a work in progress.

The progress has been there.

If you look at the eight games the Bobcats have played since Jefferson's made his most recent (and hopefully final) return from injury, Walker's stats are much closer to his averages last year: 42.6 percent from the field, 32.4 percent from three, five assists per game (27.9 assist percentage, which is merely marginally better).

Eight games is a pretty small sample size, so that's worth being aware of, but as the lineup meshes with Jefferson's addition, it's worth consideration that Walker might have some leeway to bounce back.

However, at this point, Walker's been having a rough, inconsistent season on offense that must improve.

Statistical support made possible by: