As the All-Star game comes and goes we again have had the injustice of a Bobcat not making the NBA All-Star game. This is a travesty that must be addressed. There are 3 Bobcats players that obviously deserve an all star bid and just to prove it I will compare the way they played the previous season to the way they’ve played so far this season, starting with Byron Mullens.

Share All sharing options for: Has Byron Mullens improved offensively?

Byron Mullens is an interesting player, to say the least. He's infamous among Bobcats fans, constantly raising hope and then crushing it with inconsistency. The question that plagues us constantly is "What type of player is he?" Is he a center that bangs down low and gets garbage rebounds? Or is he a stretch power forward that should be hanging out on the perimeter?

According to 82Games.com, Mullens played center in two of the three most used lineups for the Bobcats last season. The results were ... less than stellar. (Warning: the following picture may be sensitive to some, viewer discretion is advised) 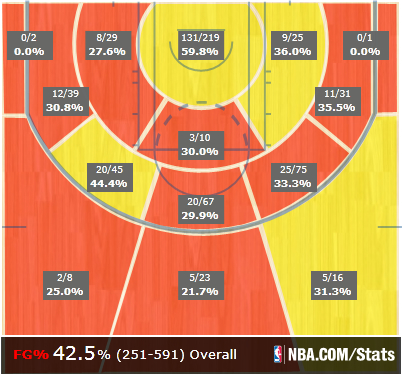 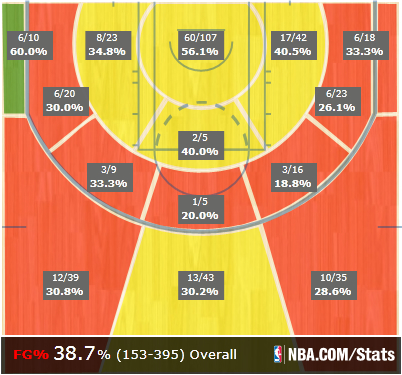 This season's chart definitely looks a lot better than last year's. Of course, Mullens hasn't taken as many shots yet but the increase of yellow and the one spot of green is a big improvement to the flooding of red we saw in the other chart. But this season, Mullens plays much more at power forward than he did at center last season, when he almost exclusively played center. According to 82Games, he plays in the most-used and 3rd most-used lineups at power forward. Considering that, Mullens should be playing a lot better than last year right? Well, not exactly. In some ways Mullens is playing better this year. His eFG% is up to .449, which is still bad, but it's an improvement. And his three-point percentage has gone up as well to a .320, which is still not outstanding either. With a rise in eFG and 3P%, he's obviously improved as a shooter compared to last year.

The only problem is he's shooting an abysmal 39% from the field this season. That's awful even by Byron Mullens standards. As a center, Mullens took higher percentage shots, lending to a higher FG%. As a power forward, he takes more 3 pointers which explains the jump in eFG%. In effect, Mullens has culled what was a very ineffective shooting tendency. He took a stunning number of midrange jumpers last year, the most inefficient shot in the NBA. This year, we've seen Mullens transition his shot selection to taking more threes. So though he's taking an almost identical number of shots per game, his efficiency has improved slightly. Although he's shooting threes at a lower percentage than what he shot from midrange, the added value of a three compared to a two has made his shooting have a marginally better impact. Basically Byron Mullens is playing just as bad this year as he did last year. He's playing just as, for lack of a better word, "effectively" and just doing it in a different way.

So Byron Mullens has, for the most part, not improved offensively in the slightest. Good news though Bobcats fans: He also hasn't gotten any worse! It's the consistency you weren't looking for!

He's still young so there's hope, but Mullens will have to greatly increase his shooting consistency to become a reliable player, not to mention other points of his game.