This season, the Bobcats and Pistons have played once, and the Bobcats pulled away with a 108-101 overtime victory.

At point guard, it's going to be fun to watch Walker and Calderon go at it. Last time these two teams played, the Pistons' starting point guard was Brandon Knight (who, unsurprisingly, had four turnovers). This time, it's former Toronto Raptor Jose Calderon, who's been playing really well in his short stint as a Piston. The most interesting thing to look out for in this matchup is the pick and roll. According to Synergy, Kemba's 22nd in the NBA in the pick and roll category. On defense, Jose Calderon ranks 14th in that category in his time on the Pistons. We can go ahead and chalk this up to a combination of small sample size and Detroit having better defensive players around him. Looking back on the rest of his season in Toronto, he ranked 128th in this defensive category.

At shooting guard, there are two fairly similar players in Brandon Knight and Gerald Henderson. Both have below average shooting percentages and both shoot a lot. However, there are two things that separate the two: first, Brandon Knight turns the ball over much more than Henderson. Second, Knight has been playing very poorly in the month of February, while Henderson's stats this month continue to increase. Henderson is shooting over 10 percentage points higher than Knight, and has been much more effective than Knight shooting from closer than 20 feet.

Kyle Singler and Michael Kidd-Gilchrist look like pretty different players on the outside, but after a longer look, they're actually pretty similar at the small forward position. MKG is better. It's not really that close, either. The two have similar offensive numbers, but they score in different ways. Singler's a better outside shooter who also can get to the bucket on occasion, while MKG has no jump shot and scores a solid percentage of his buckets in the paint. His shot chart is hilarious. 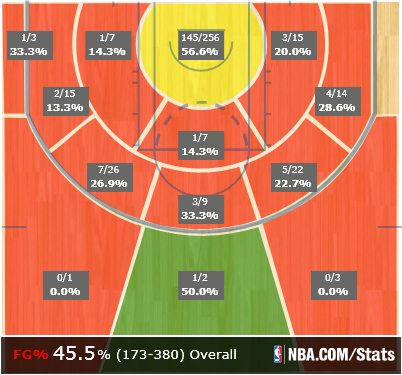 At power forward, we are blessed with a marquee battle between Jason Maxiell and Bismack Biyombo. Last time the Pistons and Bobcats played, Maxiell was dominated by Biyombo. Biyombo had 10 points and 17 boards that game. With Andre Drummond out and the only other real option for the Pistons being Viacheslav "SOON TO BE HOUSEHOLD NAME" Kravtsov, Biyombo will have another opportunity to dominate again.

Byron Mullens and Greg Monroe will be facing off at center tonight. In their last meeting, Mullens didn't play, and Monroe had 18 points and 14 rebounds. While Monroe probably won't do as well as he did last time, I don't think Mullens will stunt Monroe's production that much this time around, especially because Monroe has become a target for Jose Calderon.

(Ed.: Also of note is that this game could have an impact on this year's draft. The Bobcats own a first round pick from Detroit. If the Pistons make the playoffs this year, the pick is Charlotte's. If they don't it becomes top-8 protected in 2014, then top-1 protected in 2015 and unprotected in 2016. - Ben)

Remember to check out the Detroit Pistons blog Detroit Bad Boys for more.