Despite an early hot start, the Bobcats fell quickly back to earth in the remaining three quarters for an embarrassing 22-point loss.

Share All sharing options for: Bobcats lose to talented Clippers, 106-84

Like so many games before this one, the Bobcats showed hope and promise of a good game in the first quarter. Byron Mullens may have put up outrageously bad shots, per usual, but that really didn't matter because the team was winning at the start of the game. Gerald Henderson was making bucket after bucket while the team played hard-nosed defense and forced turnovers.

Of course, that really couldn't last long because, well, their early success was predicated on an unsustainable offensive model. As cool as it is to see Byron Mullens face up and hit long twos over DeAndre Jordan or running the offense through Gerald Henderson's midrange game, it's just doomed to fail. It seemed that the old 'Cats team returned the moment when the 2nd quarter started. Perhaps it was the fact that the Clippers have the 6th-ranked defensive efficiency in the league or just another page in the sad story of the Bobcats 2012-13 season. I'd prefer to say think that 2nd quarter was the result of the Clippers playing great defense but I know it was a lot more. Charlotte's offense really didn't click for that entire quarter because it didn't really appear like the team had much of an objective.

I say that because there were times that Kemba Walker tried to make impossible passes to fellow Bobcats that were eventually became turnovers and Blake Griffin slam dunks. With those turnovers, the team was just flat out awful on offense not only in the 2nd quarter but the entire game. Byron "Double Deuce" Mullens wasn't as awful tonight as he was in the previous two games (combined 6 points on 2-for-21 shooting) but that doesn't mean that he was that great. Mullens shot 6-for-13 from the field which really doesn't seem too bad unless you look at his shot chart (below) where most of his made shots consisted of simple plays around the basket. 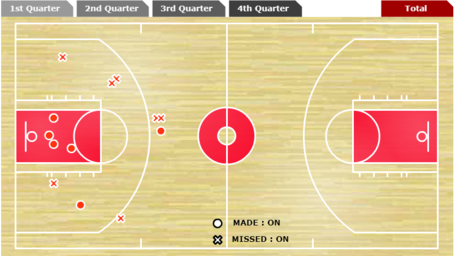 While Mullens is at the top of my mind when it came to individual problems with this loss, I've previously mentioned how Kemba Walker was at fault in the 2nd quarter for making bad decisions on offense. While that may somewhat be true, he only had 3 turnovers in this game, about what he's currently averaging per game this season. Like Mullens, Kemba had a bad shooting night, which is to be expected out of a 22 year old guard like Walker. He shot 5-for-15 from the field with 15 points - not exactly efficient, but he missed wide open looks that would have gone in on other nights.

While Charlotte's performance tonight was lackluster to awful, you still have to praise the overall shooting night that Gerald Henderson had. Hendo has had an up and down season for most of the year but really shined in tonight's game where he scored 24 points on 12-for-19 shooting with 3 steals. February has been his best month so far scoring 15.2 PPG on 44% shooting which is solid for an above-average shooting guard like himself.

Henderson's play was the real only highlight of the night for Charlotte as the Bobcats traipsed to an embarrassing loss. But the Clippers are an elite team and perhaps we can't expect a team with such a lack of talent to compete with top teams somewhat consistently like they have recently. What's more embarrassing, however, is that the Bobcats had about $28 million of their payroll not play a single minute last night - Ben Gordon, Tyrus Thomas and DeSagana Diop all got DNPs.