Where has and hasn't Kemba Walker improved?

Kemba Walker was a 1st round draft pick and had high expectations among Bobcats fans and basketball fans alike. Unfortunately he had a less than stellar first year in the NBA, but has he improved?

Share All sharing options for: Where has and hasn't Kemba Walker improved?

Unlike Byron Mullens, whose offense I looked at previously, we know what type of player Kemba Walker is and what he is going to bring to the Bobcats.

Kemba Walker is a scoring point guard and he intends to put the ball into the bucket. Many question if this is good for the team and some posit this makes him not a "real" point guard. Whether the Cats should have Walker as their primary scoring option or he should be viewed as a distributing point guard is a good question that is worth exploring, but the idea that scoring makes him not a real point guard is silly. The line of thinking that holds to the view that "a true point guard plays this way" is counterproductive, because there is no such thing as a "true" point guard anymore. The Heat aren't hurting because they don't have a "true" point guard in Mario Chalmers, so the Bobcats are not hurt that Walker does not fit into this magical category of true point guard.

This is not to say Walker has not hurt the team in the past. Walker had been labeled by many fans as a draft bust with no future hope because last season he was known for jacking up bad shots.

When we look at Walker's stats, we can notice some immediate improvements this season in PER, True Shooting Percentage, and Effective Field-Goal Percentage. As we can see, his eFG% last season was a horrible 41.1 percent, and he was barely shooting above 30 percent from three-point range. He was attempting 15 shots per 36 minutes and only making five of them. Now, compare that to this season as Walker posts an eFG% of 48 and has the even bigger improvement at TS%, where he's now slightly above league average with 52.6%. As we can see, he's still taking 15 shots but he's making 1 more of those and his points have gone up from 16 to 18 per 36 minutes. So Walker is taking for the most part the same amount of shots as he did last year but his stats have gone up in most shooting areas. Based on this, we can assume Walker is taking smarter and/or higher-percentage shots compared to the wild and crazy, throw-up-every-shot-ever version of Walker from last season. 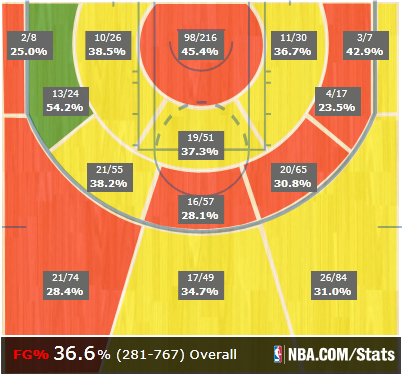 And here's his chart from this year: 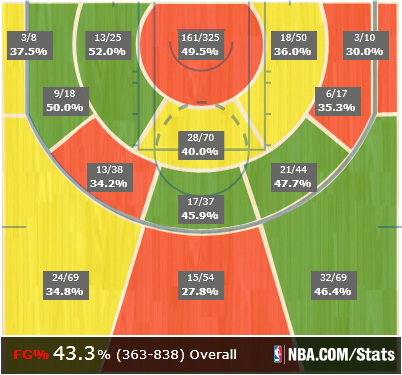 We can see that Walker is taking more shots at the rim (thus the higher efficiency) and he's just making more of his shots in general. I can analyze all I want but sometimes a guy just makes his shots. He's still taking too many long twos but not to the degree he did in his rookie season.

Let's look at some of the non-scoring assets of Walker's game. His steal percentage has increased from 1.8 to 2.8., This is nice because the added steals have led to more points in transition. It's also very helpful towards the Bobcats in terms of wins. When the Bobcats lose games, their opponent's average 9.9 turnovers per 36 minutes, and when the Bobcats win, their opponents average 11.1 turnovers per 36 minutes. Walker's steals are directly helping towards the Bobcats getting wins but how have his steals gone up? Well the increase in minutes this season (27.2 per game last year 34.5 this year) probably has a bit to do with it. I think also the Bobcats, in general, are playing a pace on defense meant to force turnovers, but we need to give credit where credit is due. Walker is playing the passing lanes and while his defense still needs some work, it's definitely improved over last season.

Walkers' rebounding has decreased this season. More than likely this is a result of having A) a better-rebounding Byron Mullens, B) a slightly better-rebounding Bismack Biyombo, and c) Michael Kidd-Gilchrist, who helps wrangle in rebounds both inside and on the perimeter, where Walker is more likely to get his rebouds.

From what I can see from Kemba Walker this year, his play style is still heavy on shooting. But unlike last year, when he took a lot of bad shots, this year he's taking much smarter shots. He's getting to the rim more, he's taking more 3 pointers, and he's getting more consistently to the areas of the court that he's comfortable in. These are all very positive signs compared to last year and show a lot of improvement. The numbers may not be insanely different, but in time we should see more points and a better-run offense because once a scoring player starts taking the right shots those shots, in theory, should begin to fall.

While we have seen significant improvement from Walker in most areas of his game there is one area that has remained the same, or close to it: his assists and turnovers. The amount of turnovers Walker committed last season was 2.4 Per 36 minutes. This season he's at 2.4 turnovers per 36 minutes. This isn't bad; actually, it's pretty good. That's not a lot of turnovers at all, and is more of a result of incredible ballhandling skills. However I'm not sure we want to say this is because Walker is taking care of the ball with his passes. When we look at Walker's assists where he's averaging 5.7 per 36. Last season Walker averaged 5.8 assists per 36 so he's basically averaging the exact same amount of assists. The Bobcats are a team that does not pass the ball a lot.

They spend a lot of time dribbling around and getting themselves into trouble and Walker is just as guilty of that as anybody else on the team.

As a result the team doesn't turn the ball over very much but they also don't get a lot of assists. You can also argue that Walker doesn't have teammates converting on the open shots that he creates for them but I feel the main explanation for his lack of increase in assists is because of the team just not passing the ball very much.

There are still questions with Walker that need to be addressed. Can his passing improve? Can he run the offense? Can he be a primary option for this team? His passing should improve. It's not even that terrible at the moment; his issue is more decision-making than ability. He's never going to be a Rajon Rondo-level passer, but he should learn to make the right passes at the right times. Now can he run the offense? I think it depends on the system he is in and if he works in it. He's not going to be the primary option on a team, and he probably shouldn't be, but that doesn't mean he can't be a starting point guard on a team and help run an offense. His ceiling looks like a quality starting point guard or role player and that's okay. Every single first round draft pick can't be a franchise player and once they've been drafted where they were drafted shouldn't really matter. All that matters at this point is how he plays and if the way he is playing helps the team and right now Walker is helping the team more than he did last year.

Significant improvement is a great thing for the Bobcats.