Kanter's monster game: How Biyombo erred and how the Bobcats lack awareness

I was drawn to look at Biyombo's performance again due to Kanter's huge night.

Share All sharing options for: Kanter's monster game: How Biyombo erred and how the Bobcats lack awareness

After Enes Kanter finished the second start of his career with a 23-point, 22-rebound performance, shredding the Bobcats in the paint and even with a couple jumpers outside of it, I was intrigued to rewatch to see the intricacies of where the Bobcats erred. I was especially interested in the play of Bismack Biyombo as well.

A few minutes in we find the first evidence that the rest of the game could be a rough one. 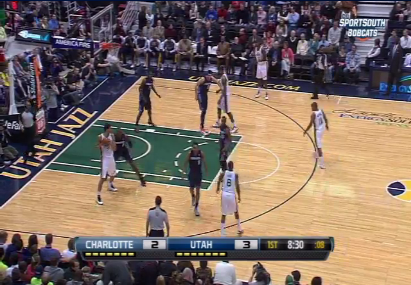 Kanter gets the ball on the left low block and proceeds to simply back Biyombo down all the way to the restricted circle. 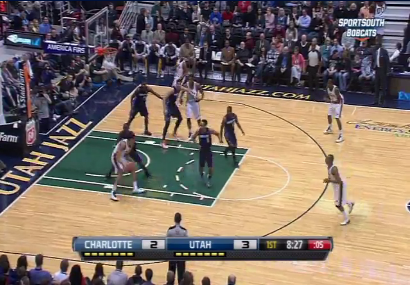 Just look at that: all five Bobcats are in the paint right now. The ball is on the weak side and the Jazz have seemingly trapped themselves. Or they would have, were they not facing the Bobcats. By overloading the weak side of the offense, the Jazz are putting a lot of reliance on swift ball movement should Kanter need to pass out. Because of the passing angles Kanter is restricted to, the Bobcats could essentially leave the Jazz player in the corner all alone. There's no way he can make that pass and if the Jazz tried to swing him the ball, the Bobcats would have time to rotate on defense. Theoretically, Gerald Henderson could have came with the double as soon as Kanter started bumping Biyombo under the basket. Kemba Walker could have rotated to guard at the top of the key, and instead of uselessly rotating down low next to Byron Mullens, Michael Kidd-Gilchrist could have helped on Marvin Williams. Now pretty much everyone is covered and the Bobcats have the help they need to pressure Kanter into picking up his dribble.

But that doesn't happen. 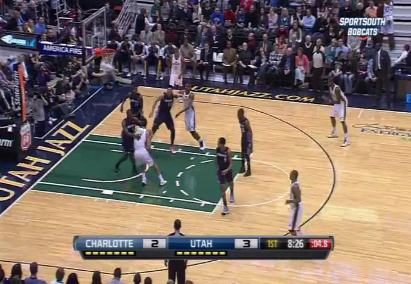 Instead, everyone pretty much just watches as Kanter makes a brilliant post move, pivoting inside and then quickly spinning inside for the layup, which puts Biyombo behind him and makes defending the shot pretty much impossible. 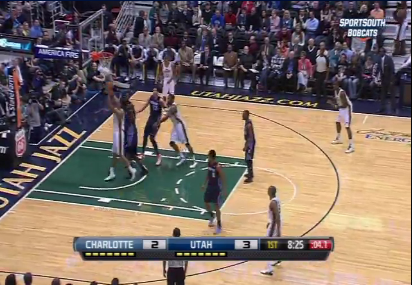 The Jazz loved that play and went to it a good bit during Friday's game. Kanter is clearly more comfortable putting the ball on the floor from the left side of the court. This time the Bobcats overcompensated and gave Kanter the triple-team, which is probably overdoing it a bit, no? 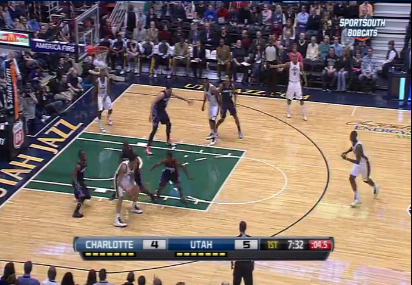 Marvin Williams is no sharpshooter but with a 33.3 3P%, maybe you want to cover him. On the other side of the floor, Henderson seems conflicted in deciding who to guard, as Earl Watson could cut baseline, but can Henderson really afford to leave Randy Foye open for an easy swing pass? Foye is a 41 percent three shooter. This is just all around crappy defense. 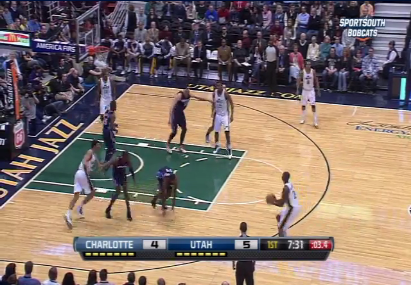 Anyway, Kanter passes out to Williams. Michael Kidd-Gilchrist falls to the floor after tripping on Biyombo's foot. And more dominoes fall. Perhaps Biyombo pauses here to try to close off the paint, but it makes no sense why. Williams isn't going to pass up an open shot to step inside for a more contestable two. Biyombo's hesitation gives Kanter the time and space to get behind him for the early positioning on a box-out. 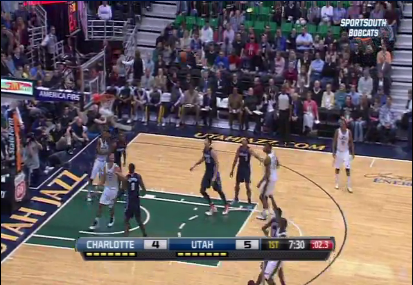 Kanter now has great positioning inside the restricted area. As he watches Williams' shot fall, Biyombo's back is turned. 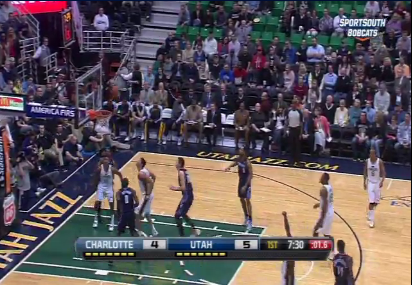 As Biyombo waits for the ball to fall to a spot it will not land, Kanter is ready and waiting, not contested by a single Bobcat. Mullens manages to tap the rebound, but Kanter still has the control to tip the ball into the hoop on the putback attempt. 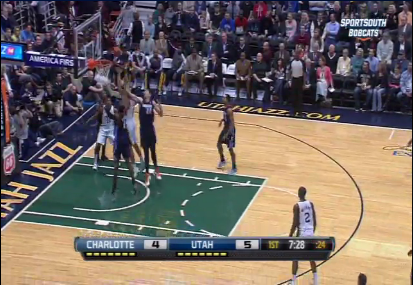 Another low block Kanter post-up? You bet! By the way, Kanter really loves that test move to begin his post moves where he straightens his back momentarily. 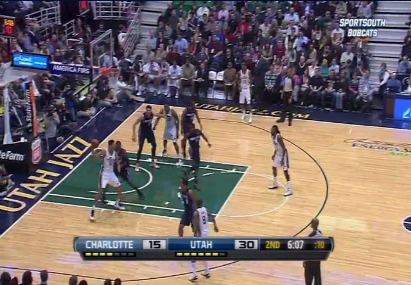 Wait. Just watch this. This has nothing to do with Biyombo's defense. This is all about Kanter on this play. Maybe it's that the Bobcats are the Bobcats, but I would love to see Kanter get a larger role on the Jazz or wherever else that would use him well in the post. Not only is he very strong with great size, but he's got a really nifty pivot spin move out of the post. His quickness is fantastic, and we see it right here. 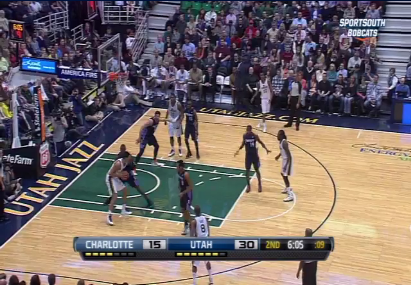 And BAM -- the next thing we know, Kanter's put the ball on the floor, creating a baseline drive out of little space, an extraordinary move for a give of his size. Phew, but thank goodness Byron Mullens is there defending on the other side of the paint to challenge any reverse layup Kanter might want to attempt. 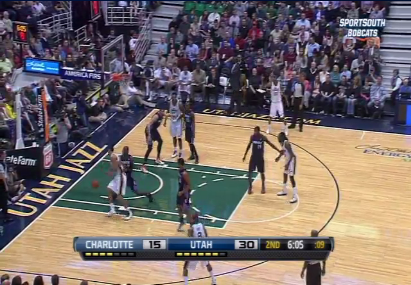 And it seems that's what's about to happen. Mullens keeps his man at arm's length but faces towards the basket in what appears to be an attempt to bring an extra pair of arms to challenge Kanter. Besides, Kemba's right there next to him in case Kanter wants to test his skills as a point-center. 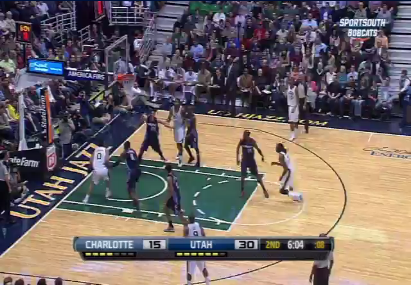 But no, that doesn't happen. For whatever reason, Mullens instead strays towards the top of the restricted circle. Kanter now has the space to try a reverse layup without having to worry about Biyombo's nagging length challenging a normal shot. I have no idea why he does that. Henderson and Kidd-Gilchrist are close enough to box out their men, so Mullens should have to worry about anyone crashing the lane. It makes absolutely zero sense for him not to just close off the reverse layup angle for Kanter. 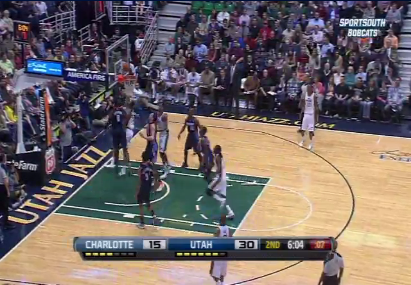 Here we have Kanter not posting up out of the left block. SURPRISE. No, they run a pick and roll and he gets a midrange jump shot from about 18 feet out. He's not exactly wide open, but rather open enough that it's a feasible long two attempt. Biyombo closes on the shot contest, which was fine enough. Where he went wrong is by just watching the rest of the play happen. 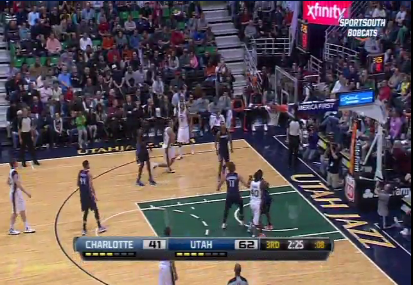 Kanter immediately knows his shot is off and starts getting ready for an offensive rebounding attempt. And why wouldn't he? Biyombo's the best rebounding opponent on the floor and he's already getting ready to go up the court. The Bobcats have Ramon Sessions, Josh McRoberts and Ben Gordon around the basket awaiting a possible rebound. Kanter has pretty much nothing to lose by wedging himself in there. He's stronger and taller than all those Bobcats, so his chances at an offensive rebound are well above average. 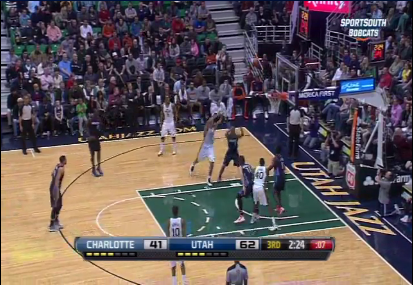 And there it is. Kanter gathers the rebound off his miss right inside the circle. He's swamped by defenders, but his defenders are Josh McRoberts, Ramon Sessions and Ben Gordon. He's practically wide open under the basket. Do you really need to ask yourself what happens next? 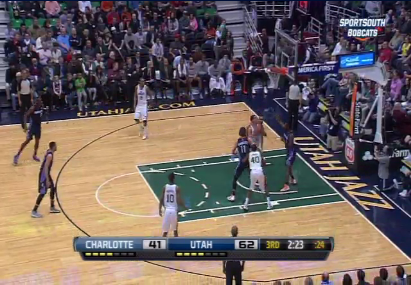 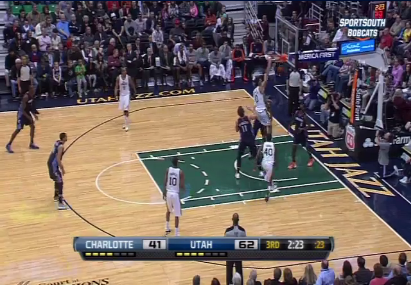 Ultimately, we have a very embarrassing performance from the Bobcats at the same time Enes Kanter has an exceptional one. Kanter wasn't the third overall pick in 2011 for nothing. He has some fantastic athletic gifts, great rebounding prowess and solid footwork in the paint to thrash a frontcourt as bad as the Bobcats.

Charlotte at times brought help against Kanter and they got positive results, forcing Kanter into turnovers. This certainly isn't all on Biyombo, who had a mostly dreadful game. It didn't help that the team went back to using DeSagana Diop, who was late coming up and down the court and didn't help stop Kanter in the slightest.

Though Biyombo deserves his fair share of culpability in not defending Kanter well, it was more so a compounding of the Bobcats' weak frontcourt talent, awful rotations and inability to defend as a team.