Shout out to L'Orange!

I said on Twitter last night that I'd do this and I try to keep promises best I can.

The culinary tragedy of being in college and living in Carrboro is that the closest Taco Bell is in Durham. You have to practically plan a trip to make a visit. "Ah, I guess I'll go to a Bulls game and check out a concert at DPAC then on the way home grab a crunchwrap supreme," you'll say. There's no spur of the moment trips like for other people who can take a five minute ride to their closest location.

But this was no ordinary visit today. No, today was the release of the newest Doritos Locos Taco flavor and I was ready to brace the huge crowds to be one of the first to try it.

I had class at noon and the store opens at 10 a.m. so I knew I couldn't dally. By the grace of God, there wasn't any line. I arrived around 10:15 so maybe everyone got there as soon as it opened and left before I made my entrance? 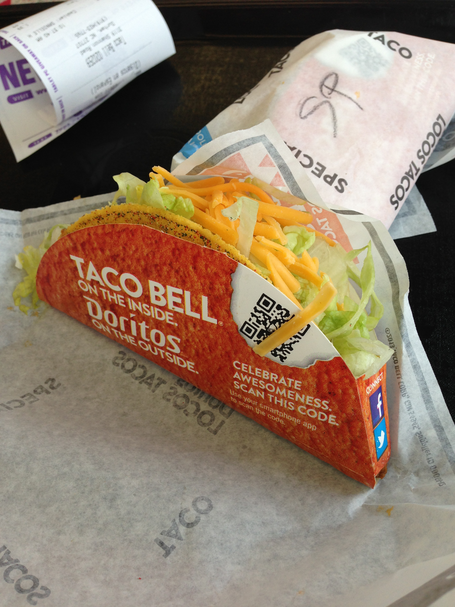 Always trust tacos with mysterious dust on their exterior reminiscent of the bottom of boxes of Fruit Loops.

Because I only have a six month memory to go on for comparison, I could err on this, but bear with me. From what I recall, the Nacho Cheese taco was a tad overpowering with its flavor. The Cool Ranch flavor is a bit more subtle, I thought. Yeah, it's Taco Bell. Subtlety is not exactly their strong suit, but you know what you're getting.

The regular taco is ground beef (or "ground beef," if you so prefer to call it), lettuce and cheese. Pretty run of the mill stuff" most of the flavor is from the beef, a crunch of thin, papery lettuce and only the slightest sprinkle of cheese. I used to work at Moe's so I think I can say I have some authority on this subject, and I always put cheese under the lettuce. There's so much lettuce, when you eat the taco, what little cheese is going to mostly fall off. If you put the cheese below, some lettuce might fall off, but who cares about that. But again, this is Taco Bell. You should know what to expect and for the price, it ain't half bad. The novelty taco adds a nice little after taste, but you really ought to just splurge and get the supreme. 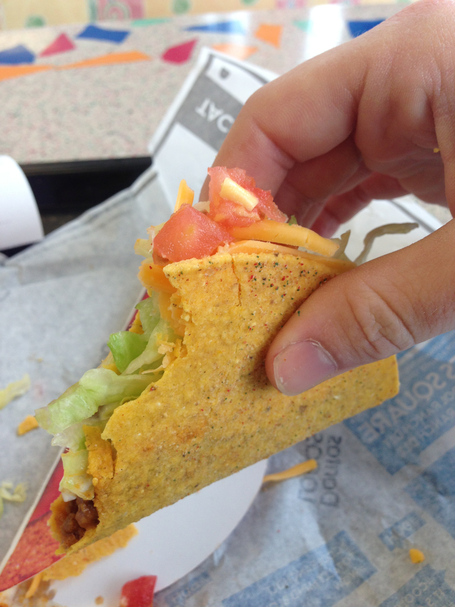 I found the supreme to be much more tasty. Same ground beef, same lettuce and same cheese, but this time they've added sour cream and tomatoes. There's more depth to the taste with the sour cream in the middle and tomatoes and the Cool Ranch exterior adds a little twist. Again, it's no world-class taco, but I'd go to Taco Bell over Cosmic Cantina on Franklin Street 10 times out of 10 if the transportation costs were identical. Such brilliant innovation is priceless. PRICELESS, I TELL YOU.

At one point, the power cut off as I was eating. I contemplated hopping over the counter and looting the place for Crunchwrap Supremes, but my conscience got the better of me. After finishing, I only wished I had bought more. Also, I momentarily wished my parents would never find out about this out of fear they might disown me. Throwing caution into the wind, I decided to write this to spread the good word, approval be damned.