Bobcats tease their fans with a great first half but just croak in the 2nd half because of Brooklyn's perimeter shooting. MKG does some good things, while Ben Gordon doesn't.

The Brooklyn Nets (35-26) entered this game as the 4th seed in the Eastern Conference and were favored by 9 points. They certainly didn't disappoint in that aspect. The Nets have been up and down this season while also struggling in the last 10 games but of course their outlook improved tonight when they defeated Charlotte 99-78.

The Bobcats actually started the game looking like a solid NBA team. They were on a hot streak offensively but they also played sold defense especially in the frontcourt. Brooklyn center Brook Lopez is one of the best offensive frontcourt players in this league but struggled against Biyombo in the first half, finishing at the break with only one field goal. Speaking of Biyombo, he had an overall below-average game but had some glimpses of what appeared to be an offensive game in the 1st quarter, even if most of his baskets were just dunks.

Previously I said the Bobcats looked like an actual solid NBA team simply because of the fact that they were on a hot streak offensively. They shot 63 percent from the field in the opening stanza. As you can tell from the shot chart I posted below, most of Charlotte's points were highly effective baskets inside the paint while they had difficulty shooting from mid-range to behind the 3 point line. 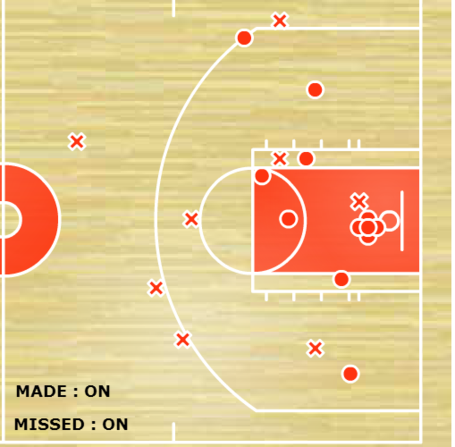 Charlotte went into the second quarter up 29-26, but that quickly became a bigger advantage for the Bobcats as they continued their hot shooting streak. One of the offensive leaders in the 2nd quarter was the controversial Ben Gordon, who was actually rumored last month to be the subject of trade negotiations between Charlotte and the Nets after a reported feud with coach Mike Dunlap last month. Gordon isn't really loved by most Bobcats fans but there are games where he can get hot from the field just like in this second quarter when he scored 12 points on 4-6 shooting from the field.

Again the Nets were struggling offensively in the first quarter because they committed 11 turnovers in the first half. This helped Charlotte get out in the fast break, which is something they're actually relatively good at because of the young athletes like Walker and Kidd-Gilchrist.

If you're reading this recap without watching the game, you'd probably be asking how the Nets won this game by such a wide margin when the Bobcats were playing so well. Of course I'd probably tell you about how this is pretty common for the Bobcats but I'll also show you Brooklyn's 3rd quarter shot chart. 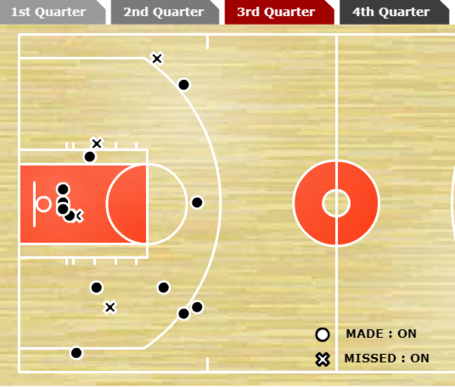 As you might be able to discern from the image above, Brooklyn just couldn't be stopped offensively because of how well the likes of Deron Williams and Joe Johnson were shooting. Williams has had a bit of a down season with the Nets, but he looked fantastic on offense by shooting 3-6 from the field and also having 4 assists in the quarter. While Deron Williams was the all-around package, Joe Johnson basically shot the Bobcats with a tranquilizer gun and put them to sleep with his 10 points on 4-5 shooting from around the court in the quarter.

While the Bobcats suffered through most of the 2nd half, the one shining light on the team tonight had to be the play of the 19-year-old rookie Michael Kidd-Gilchrist. Most people know about how good MKG is on defense yet also understanding his difficulties on offense. He really didn't shoot that much from the field tonight but he looked more comfortable with driving to the basket. I would like to see more of that in the next couple of games solely because I just want to see him progress as an offensive player, and the most dynamic way for him to do that is by getting to the bucket consistently. MKG finished the game with a team-leading 17 points with 5 rebounds, which will hopefully turn into a common theme after finishing with similar numbers Monday's game against the Trail Blazers.

Let's go back to the 4th quarter - the quarter that eventually turned this game into a 22 point blowout. Earlier I talked about how Ben Gordon helped the team out in 2nd quarter with his shooting, which was great because he was hot at the time. But he ended up killing the team late in the game. Gordon shot an embarrassing 2-8 from the field, which seems horrible on paper but is even worse when you just watch him putting up horrible shot after horrible shot.

Even with Charlotte as bad as they are, they still disappointed me tonight for some odd reason. Despite all of the losses that the team has had this year, I still hold out hope when I see a glimmer of what could be the future of this team. I saw some of that in that first half. So I'll try to forget the second half and think of this game in a weird positive light because of the play of Kidd-Gilchrist, but I still can't help but ponder.