The Bobcats struggle in defending spot-up 3's. In the Heat game they especially struggled, allowing the Heat to shoot 8-18 on spot up 3-pointers.

Share All sharing options for: Bobcats spot up 3 defensive woes

The Bobcats are a team that doesn't win a lot, though for a simple reason. That reason is that they are a team with many flaws. Some of these are small; others are large. Today, I'll examine a large flaw that was exposed the other night in a game against the Miami Heat. The Bobcats are a very poor team at defending the spot up three.

A large part of this is because the Bobcats have a very weak front line defense and inability to prevent penetration. As a result, the defense usually plays too deep into a zone. Once the opposing team starts moving the ball it is very easy for them to get it to a spot up shooter and get them a decent look. This means a lot of teams will score very easy 3-pointers on the Bobcats.

This is not the main flaw in the defense, however. The opposing team shooting threes that way is almost designed in that style of defense. The flaw is the complete lack of communication that takes place on the defensive side of the ball.

For example, take this play here. 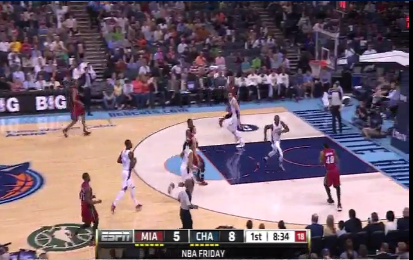 To set you up for this, Udonis Haslem is about to take and miss a mid-range jumper. The Heat will recover the rebound and during Charlotte's confusion in deciding whom to cover after the rebound, this happens. 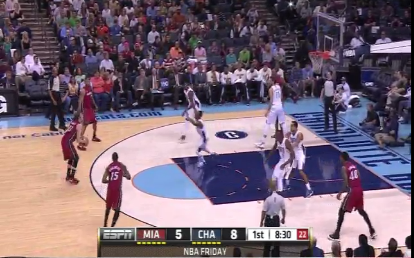 Mike Miller, a very good shooter (55.6% eFG), is left wide open. There's plenty wrong with this picture. Why is the Bobcats' first instinct not to cover the best shooter on the floor? As you can also see in the bottom left corner, we have two Cats players literally right next to each other, and we have Mario Chalmers, another good shooter (54.5% eFG), wide open on the wing. The result: Mike Miller hits the spot up three - easy points for the Heat.

Plays like this happen when the Bobcats don't communicate. This all could have been avoided if the players were yelling out who they were going to cover. Instead, there was no talking and we have absolute confusion on the defensive end. Offensive rebounds are often a fault of the defense to begin with, but the lack of communication compounds problems when multiple players occupy the same space. It might be a tad unfair to criticize an impulsive thing as defending a quick shot like this that capitalizes off of defensive confusion, but its another result of poor fundamentals.

We have yet another example of a lack of communication on this play. 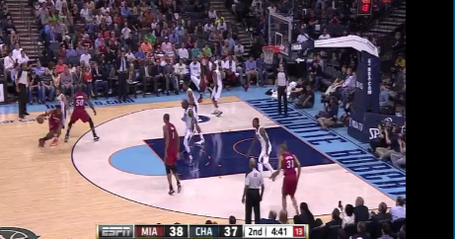 As Norris Cole goes around a pick set by Joel Anthony, we see some good things happen even even though Cole has gotten around his defender. There are two Bobcats players there ready to help stop the drive. However, Cole gets around those defenders and then this happens. 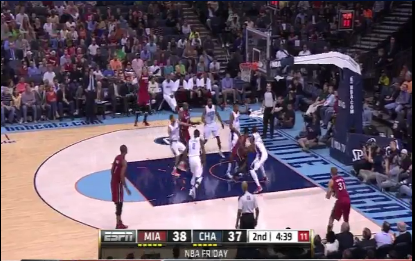 I see five Bobcats covering Cole right now. I get that you don't want to give up the easy layups but the only player that deserves the right of a quintuple-team is LeBron James and I don't see him right now. This is a huge lack of communication amongst the defense as Cole can easily kick out to one of his teammates, get the ball moving and get a wide open shot. That's exactly what happened. 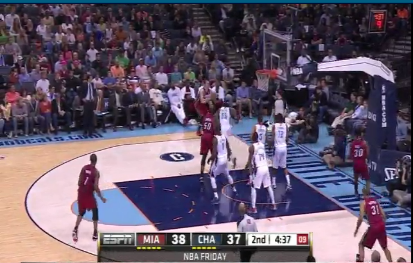 You can see Reggie Williams running over, desperately trying to contest the shot, but it's to no avail. That's Mike Miller taking the third most efficient shot in basketball. And how often can you expect a 40+ percent 3-point shooter to pass up or miss an open shot like that? Well, I hope you didn't expect it that time - again, three points for the Heat.

We even have a lack of communication on the simplest of plays. 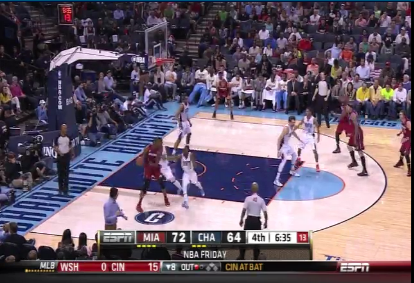 Here we can see that Chris Bosh is being double teamed on a baseline isolation. This was actually a smart decision by the Bobcats, but it becomes poorly executed. When Bosh turns and uses his size to pass the ball out of the double team, Chris Anderson, up at the top, begins to cut. Here the Bobcats players that are closest to him needed to communicate who is going to take Anderson and who is going to stay at the top and take Mike Miller behind the 3 point line. Instead, both players move with Anderson. The result? 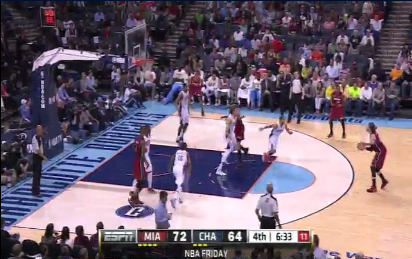 In the defense of the Bobcats, the Heat are really good at doing this to everybody. If you look at the rest of the spot up threes the Heat took that night, a lot of them were well-contested shots, given the situations and contexts of the plays. However, these were some glaring mistakes fostered by a giant lack of communication between players. The best defenses in the NBA talk to each other, yet the Bobcats usually don't. This is still a young team so the defense should develop over time. That still does not excuse gigantic lapses such as quintuple-teams, or not even saying who's going to take the cutting man. These issues can be fixed but it will take time. Until then, this will most likely remain a problem until the season finishes out.