Gerald Henderson has been a key player for the Bobcats. What was his season like?

In a season filled with many losses, it can be difficult to figure out which players are key to a team and which players need to go. Sometimes, players we think need to stay actually need to take a hike and players we don't feel are useful are actually incredibly important. It is time to take a look at Gerald Henderson and decide just how useful to the Bobcats he is.

Henderson had what I would call a solid season. He had a PER of 16, which is just above league average, and a True Shooting Percentage of 53% which is, again, around league average. However, I think this number doesn't accurately reflect his season because of an early-season injury and gradual improvement as the season wore on.

According to NBA.com/stats, Gerald Henderson had a TS% of 50% in January. This number increased to 54% in February and 57% in March -- which I think most of us can agree is when he was playing his best basketball. With these numbers, it's clear that Henderson got better offensively over the course of the season.

In what offensive sets however is Henderson most effective on offense? Probably when Henderson is running the pick and roll as a ball handler and scoring off of cuts. According to MySynergySports.com, Henderson scores 1 point per possession (PPP) as a ball handler in the pick and roll and 1.11 PPP off of cuts. He uses his speed to get around screens quickly and when delivered the ball, wastes no time finding a good shot. He doesn't stop the ball. He doesn't square up his defender and isolate. He immediately goes to the basket or fires up a jump shot.

On defense, though, it's really tough to describe Henderson's ability. He's a very solid defender, but he helps too much. I think a lot of his defensive issues are team oriented, so I'm not going to criticize his defensive shortcomings too much.

Defensive stats are very limited, but according to MySynergySports.com, Henderson is very good at defending players attacking off of screens, only allowing 0.76 PPP. The reason Henderson is able to defend screens so well is, once again, because of his speed. Henderson is very good at using that speed to recover quickly, meaning the shooter has to shoot fast to get a clean shot. Because that space won't be there for long. 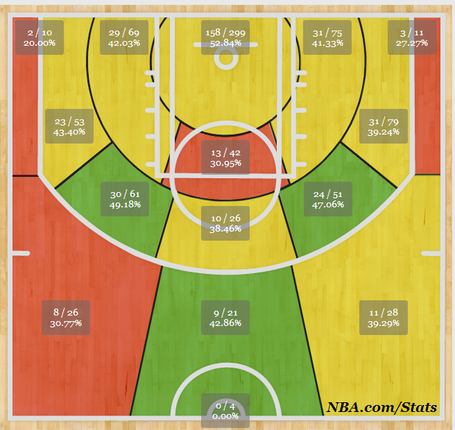 Henderson's play of the season

This one is pretty easy.

I think Henderson's 3-point shooting could use some improvement. This season, Henderson only shot 33% from 3 point land. While that's an improvement from over year, it could still be improved a little more. I'm not asking Henderson to become a 42% 3-point shooter, but shooting 36% from deep would make him a player you can't ignore from behind the arc. That should keep defenses a little more honest with him.

I give Henderson a B- for the season. There's still a lot about his game he can work on and improve (3-point shooting, not over-helping on defense) but he was such a key player for the Bobcats this season, especially down the stretch. Henderson attacking the basket more this season and getting to the free-throw line more shows that he understands how to be efficient. We don't know what his ceiling is, but I can definitely see Henderson being one of the top guards in the league if he continues to improve.

I think the Bobcats would be crazy to not re-sign him. The only way I see Henderson not here for another three years (minimum), is if another team offers a huge amount of money the Bobcats don't want to match. 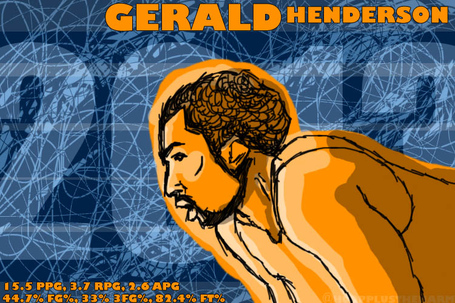