If there was one big cog in the machine that made the Bobcats really tick late in the season, it was Josh McRoberts.

I suppose it's a bit of a misnomer to call this a season recap since Josh McRoberts only played 26 games for the Bobcats this year. He arrived in the blockbuster trade deadline deal that sent Hakim Warrick on a quick route to the waiver wire.

Still, his impact has overwhelmingly been a positive one.

I could just copy and paste much of the post I wrote about a month ago for this season review of McRoberts, couldn't I?

For those who don't like to read, the basic premise is this: Because of McRobert's versatility as an active player with solid ballhandling, passing and shooting for his size, he's given the Bobcats greater success as a team.

The team averaged 18.7 assists per game in the 56 games without Josh McRoberts and 20.7 in the 26 with him. The sample size is large enough and the improvement is quite significant (a little over a 10 percent increase) that I think we can accurately attribute a fair amount of Charlotte's late-season competitiveness and wins to his addition.

The main thing that allowed him to become some a great passer as a member of the frontcourt and with this team was a combination of his basketball IQ and his ability to move with the ball. McRoberts' dribbling truly sets him apart from the rest of the Bobcats' big men. Pretty much anyone else is a risk to dribble the ball off a photographer's foot. McRoberts has a fairly intuitive feel for the flow of an offense and moves well across the court with the ball, opening up passing lanes and new streams of off-ball movement for others.

Not only did Josh McRoberts add depth to the Bobcats roster, but also to their playbook.

We can look into MySynergySports.com and see that at the individual scale, McRoberts had a pretty swell stint with the Bobcats after the trade. He was an above average scorer with 0.96 points per possession, which placed him at 118th in the league, which has around 450 total players at any one time.

He especially scored well in the pick and roll and cutting to the hoop. These two types of plays combined for about 40 percent of McRoberts' plays, so they're fairly significant. He scored 1.06 PPP on possessions as a roll man in the pick and roll, which is top-50 in the NBA. On cuts, McRoberts scored an impressive 1.26 PPP, good for top-70 in the league. His knowledge of where to be on the court in regards to offensive spacing and the defense and knowing where to cut, and when, makes him a very valuable asset.

McRoberts also kept up with the pace well and moved in fast-break situations, helping him make 77.8 percent of his shots in transition for 1.39 PPP.

However, it's important to note that we shouldn't lionize McRoberts into something he's not.

He's not LeBron. As decent a scorer and facilitator and rebounder that he is, McRoberts does none of these things far above average.

He takes about 51 percent of all his shot attempts within an 8-foot radius around the rim -- and he's a fine finisher at that distance, thankfully -- but everywhere else on the court is a mixed bag. His shot selection is spread out, but McRoberts is still no great jump shooter and his three-point percentage makes Byron Mullens blush. 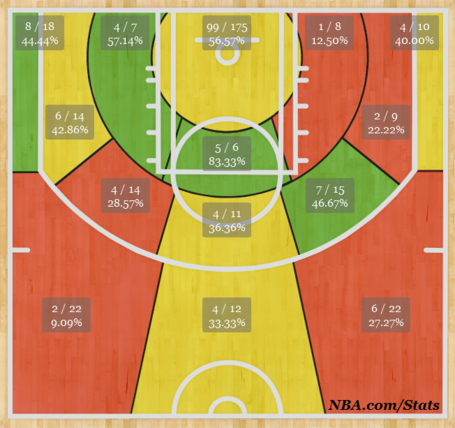 Further, despite his activity on defense, McRoberts isn't spectacular on this end of the court. He's no better than average as a rebounder, to begin with. He doesn't deny position well and isn't a very good shot-blocker. Thank goodness he moves a lot, though. The last thing the Bobcats needed was another big man who couldn't physically rotate on defense.

Play of the Season

This is the most exciting Josh McRoberts-specific play I could find on YouTube of him in a Bobcats jersey, so there you go. This has to be up there, at least.

What to Work On

McRoberts is 26 years old so it's not like he's going to suddenly develop into Hakeem Olajuwon over an offseason or two. However, he can continue to work on his jump shot and try to make it more consistent. I think that's all we can really ask. If made his jump shot just a tad better, it'd help him and the team score even more efficiently. If you're going to rely on an outside jumper as a significant part of your offense, you better be good at these inefficient long twos.

Grades are so subjective that this could be either spot-on or way off for whoever reads this. I usually grade based on how well a player plays in regards to the role they fill. McRoberts was a kind of glue player holding together the Bobcats' offense (if we can call it that) with his versatility. He loses points for defensive and shooting liabilities, but I'm happy to give him a B+.

As for the future, it seems to be up in the air for McRoberts. As an unrestricted free agent, McRoberts could go to the highest bidder. He told Rick Bonnell that he'd love to stay in Charlotte but money is a huge factor. I don't think there's a big market for McRoberts, especially not one that would be hard to outbid. The Bobcats don't need to sign him to a long term deal and can instead counter with a shorter contract for more per year during this rebuilding time when the salary won't be so painful if it expires sooner rather than later. Still, the Bobcats shouldn't be vastly overpaying anyone that isn't undoubtedly a foundation for their future. McRoberts is a fine asset to the team, but I'd rather not relive another Tyrus Thomas contract. I doubt the Bobcats do that, but my point is that it wouldn't be the worst thing in the world to let him walk if the money would hinder the team's future chance for success.

Anyway, thank you, Josh McRoberts. You made this team a lot more watchable for 26 games and my eyes thank you.