A look back at Ramon Sessions' debut season with the Charlotte Bobcats.

Ramon Sessions has spent his five-year career in the NBA fighting to prove that he belongs after being picked 52nd in the 2007 NBA Draft by the Milwaukee Bucks.

During his stint in the league, he's bounced around between below average teams like the Bucks, Timberwolves, and the Cavaliers before being picked up by the Lakers in the 2011-12 season, when he became a solid pickup. During that small time with LA, he was looked at as the main ball distributor when he was previously looked at as a dependable bench option behind young guards like Jonny Flynn and Kyrie Irving. That paradigm reversed back to the norm when he was snagged by Charlotte last offseason to help out Kemba Walker. Was Ramon able to handle that role? Well let's find out.

To say that Ramon Sessions had an interesting season would be an understatement. He's been known throughout his career for his ability to get to the free throw line but he accomplished a rare feat this season by making more shots from the charity stripe (291) than from the field (276). That indicates a couple things: 1) Ramon Sessions was exceptional at drawing fouls, and 2) Sessions shot poorly from the field. Both are true, and this season Sessions shot the most free throws per game of his career and also had the worst FG percentage of his career

Sessions has worked best in a pick and roll because it allows him to use his quickness to penetrate to the basket or kick it out to an open teammate. According to MySynergySports.com, Sessions had a 45% FG percentage when working out of a pick and roll as the ballhandler with the Lakers, but it went all the way down to 34 percent during this past season. It certainly doesn't help that the Bobcats didn't have a frontcourt player who could consistently space the floor. Even when they acquired Josh McRoberts, the two didn't play together more than a game or two.

The main problem with Sessions this season can be explained when you compare his shotcharts from the last two seasons. 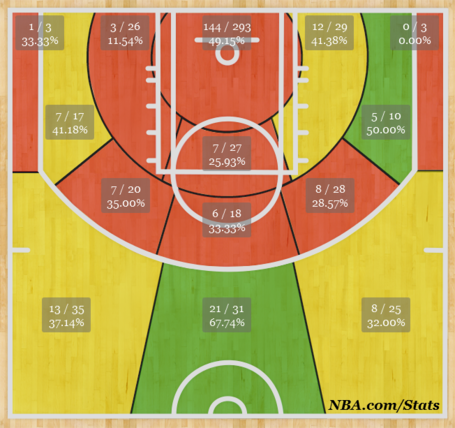 This chart from the 2011-12 season shows that Sessions was relatively solid from beyond the arc and inside the restricted area. He was surrounded by solid offensive players in Los Angeles and was looked at more of a distributor than a scoring option. Now let's compare that to the chart below from this past season, which shows that he was far less efficient because he was looked at as the top option on Charlotte's second unit. 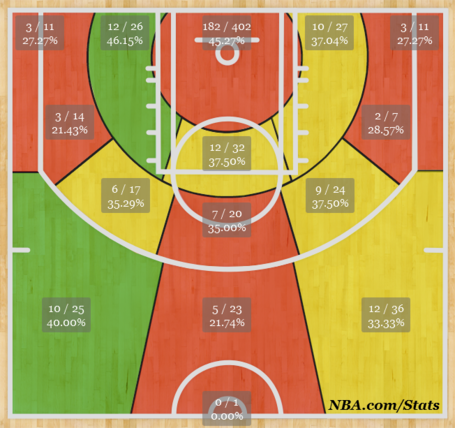 Advanced statistics from Synergy say Sessions was relatively solid defensively this season allowing .86 points per possession (PPP). He is like most backcourt defenders in that he tries to play help defense on the post player during your standard pick and roll but he's still able to close out a majority of the time if the ball goes back to the backcourt player. Charlotte's frontcourt struggled defensively throughout the season so I won't really criticize any defensive shortcomings he had this season.

Sessions' Play of the Season

Just like with Josh McRoberts, Sessions appears to have reached his full potential. His numbers have remained pretty stagnant through out his career. His lack of three-point shooting has been an issue through his career but in the last two seasons, he's emerged as a decent shooter and he's made a niche as a player who can work around the basket. Honestly, Sessions will most likely have a better season next year for the simple fact that the team will have more depth, which will allow him to go back to a more comfortable role.

Grading the overall performance of a reserve point guard is pretty challenging because he depends a lot on the play of the other four players on the court. The real lack of depth in Charlotte gave Sessions a role he's not really comfortable with because he had to take on the reins of bigger offensive demand. I'll give him an average C for his overall play but like I said before, he should improve when he has a better core of players around him.

Speaking of that, Ramon Sessions has another year on his two-year $10 million contract so the team really doesn't have to worry much about the point guard position as they continue the rebuilding process.