Byron Mullens was a major determinant of the Bobcats' offensive efficiency. When he did good things, so did the Bobcats. When he didn't, they sputtered? Here is how the Bobcats can get the most out of Mullens.

For better and worse, Byron Mullens was one of the Bobcats most dynamic frontcourt players last season. Although he wasn't a particularly strong shooter, teams had to at least respect the fact that he wasn't afraid to shoot it. This was never more evident than when Mullens missed time due to injury and we saw defenses close passing lanes, and consequently shutdown the Bobcats' offense. Though Mullens may not be perfect, we know that he gave the Bobcats a better chance to succeed than if he wasn't playing. (Ed. At least until Josh McRoberts, I would argue - Ben)

As the Bobcats continue to add talent, it's not likely Mullens remains a starter, but he could certainly still have a role since the team is committed to him. With that being said, let's look at some Byron Mullens fun facts via HoopData. (Ed. HoopData hasn't been updated since March 27 and as such, the last couple weeks of games from the regular season are not included. Though this makes the stats slightly inaccurate now, most games are accounted for and make for some insightful details. - Ben)

Did you notice a theme above? Yes, Mullens often played too far away from the basket, but playing more down low would improve Mullens' efficiency greatly. Per NBA.com, Mullens shot 60 percent in the restricted area; 55.2 percent out to 8 feet; 36.6 percent from 8-16 feet; and 21.5 percent from 16-24 feet. Of course, Mullens overwhelmingly took more shots from distance than from close range, helping lead to nightmares like this play: 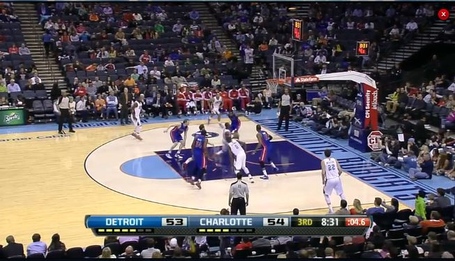 This is a piece called "Byron Mullens Goes Camping" and it happened earlier this season against the Pistons. With little rhyme or reason, Mullens spent this entire possession standing around on the arc, attempting to set weak screens, and calling for the ball while his teammates disregarded him. The Pistons also picked up on this and knew that Mullens was not going to be a factor on this play, and they were right, so Mullens' man collapsed on the Kemba Walker as he was driving to the hoop. Suddenly, the Bobcats have Henderson, MKG and now Mullens posing as a perimeter player, while also leaving Bismack Biyombo to be the lone Bobcat rebounder against all five Pistons. That's a problem, and Mullens is accomplishing nothing by being so far away from the play, especially since he can't even draw his man out of the paint.

Byron, you are not a stretch five. You should be within nine feet of the basket at all times so you can hit high percentage shots, rebound, and work within the flow of the offense instead of trying to create it. Think I'm being harsh? Even Synergy agrees with this assessment. 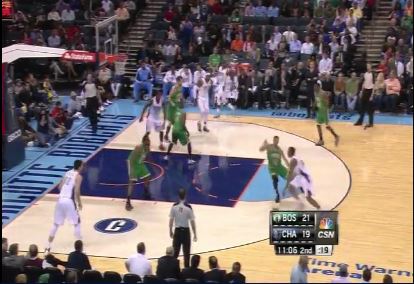 Brendan Haywood had just snagged the offensive rebound and brought the ball back up top to Reggie Williams who begins to drive on the Celtics defense, which you can see here. Note that Mullens is in the corner, but this time he's not going to remain there. 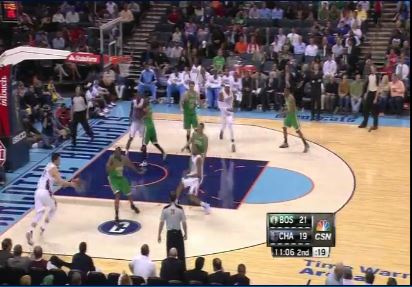 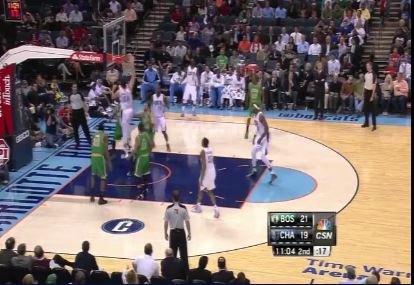 Before the defense can react, Mullens successfully drives to the baseline and rises up for the dunk. As a seven-footer with athleticism, that's going to be a very difficult play to defend.

You will recall above that the NBA.com shot location stats I posted above said that Mullens was very efficient, so let's look at an instance where Mullens and the Bobcats work to create one of those looks that involve good screens, off-ball movement, and good ball movement as well. 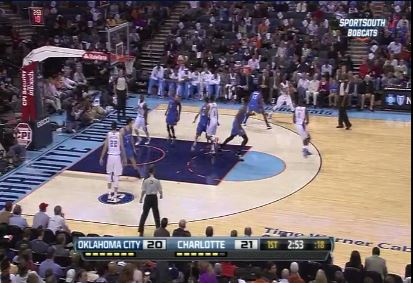 Here you see the Bobcats with the ball at the top by the baseline with Mullens guarded by Collison just off of the block. 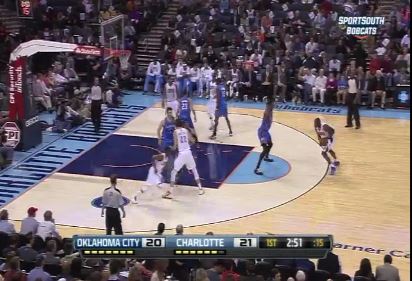 Now, Kemba cuts baseline as his man goes above Mullens and Collison in hopes of not losing Walker. However, Mullens sets an excellent screen, freeing Kemba, and Kemba meets Bismack Biyombo above the break to get the ball. Beautiful, just beautiful so far, guys. 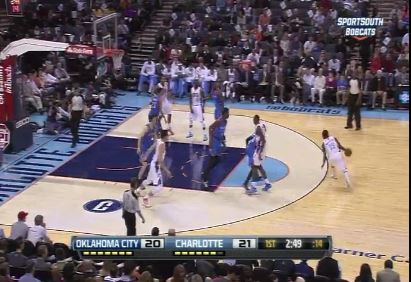 Notice here that Kemba dribbles right, drawing the defense right, and Biyombo's big body creates some interference while Mullens jogs out to the arc. This play is really fun, I'm telling you. 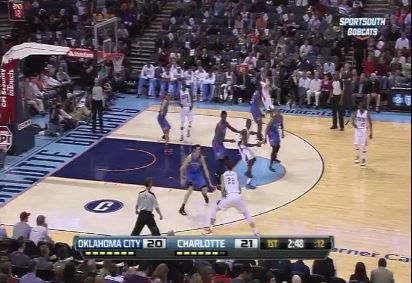 With everyone but Collison worried about Kemba, Kemba zips the ball to Mullens who is now alone with Collison. You're probably thinking that Mullens is going to try to take a contested three, but Mullens notices all that open space behind Collison and decides to use his athleticism aggressively. 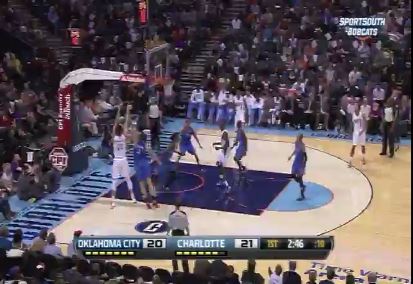 No, Mullens certainly didn't settle and was able to get by Collison, who can no longer contest the shot, to a place where he is far more efficient. Furthermore, because of the Bobcats' movement earlier, there was no one who could step up and help Collison in this situation.

Unfortunately, there were only thirty seven recorded plays of this type according to Synergy. Which is unfortunate because he posted 1.11 points per possession and shot 60% when they did. Doing more of this will help make Mullens make the Bobcats better.

For brevity's sake, I'll just mention Mullens posted 1.24 PPP off of offensive rebounds, which is far above average, if not excellent. In these plays, Mullens was aggressive in crashing the lane to follow shots and using his length and athleticism to get those ever beneficial second chance points.

Defensively, Mullens was probably average at best. Mullens rated to defend best in Pick 'n' Roll Man situations at 1.17 ppp, but perfectly average in post-ups, at 1.0 ppp. To continue my theme of insisting Mullens remain in the paint more times than not, let's look at an instance where Mullens did very well in the post. 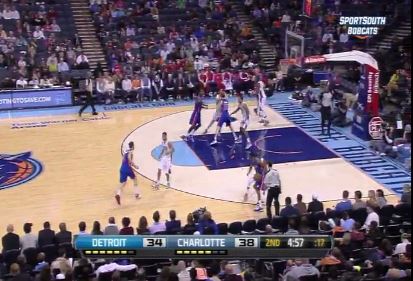 After the Pistons' Jose Calderon brought the ball up the court, he dished it to Will Bynum, whom you can see at the bottom of your screen. In the next screenshot you will see Greg Monroe post up a smaller defender and receive the entry pass from Bynum. 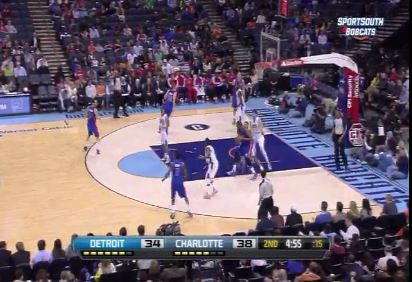 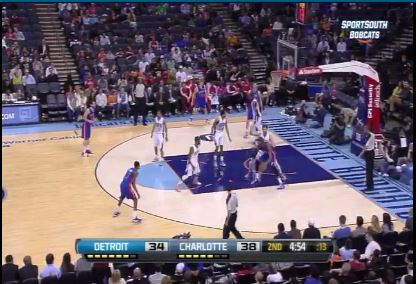 Above you see that the Bobcats have a very unfavorable mismatch on Monroe with the smaller defender. So instead of doubling Monroe and leaving a man open Mullens switches on to Monroe to give the Bobcats a better chance of stopping Monroe from backing down. 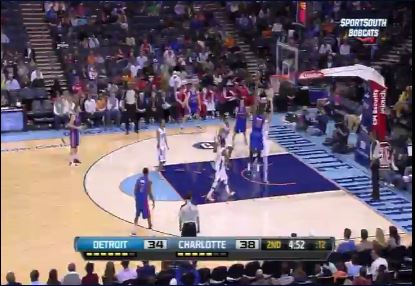 The switch was successful as Mullens stays strong against Monroe to force the missed hook shot, which is a small victory for the Bobcats. With Mullens' physical tools, as long as he exhibits this kind of awareness and communication regularly, he can be a serviceable defender for the team down the road.

Although Mullens struggled with injuries and frustrated Bobcats fans with his play at times, he did exhibit some good basketball ability this season. Good things followed Mullens when he was aggressive and playing closer to the basket rather than farther away. He exhibited good efficiency near the basket and would likely see his rebounding numbers rise if he played closer to it more often. Additionally, he has the potential to help or hurt the flow of the offense when he chooses to use his passing ability, and when he's setting screens off of the ball. If Mullens can continue to improve upon these things he could be a solid contributor for a Bobcats playoff team someday down the road.

Play of the Season

What, you expected something different?

This is a tough grade to give. His three-point shooting saw marked improvement, which helped his effective field goal percentage improve marginally, but his free-throw percentage saw a big drop, giving his true shooting percentage a little fall, too. So his scoring was practically the same (i.e. mediocre or worse), which is the main contribution he has on offense. From last season to this season, the percentage of his FGA that were jump shots rose from 66 percent to 78 percent. On a more positive note, Mullens was much more active on defense and as a rebounder, which was nice to see. I'll give him a C- for somewhat counterbalancing a subpar offense with an average defense.

Moving forward, Byron Mullens will be a free agent this offseason. I imagine Charlotte will offer him a qualifying offer to make him a restricted free agent next year. A qualifying offer is a one-year contract usually 125 percent of their current yearly salary (or their current salary plus $175,000 - whichever is greater), but Mullens meets the starter criteria, having started 41 games this season, which means his qualifying offer can be raised. Either way, I think we'll be postponing our debate about re-signing Mullens or matching offers for him for another year. - Ben