This is also our goodbye to Gana Diop, if the Bobcats have any sense.

I'm sure DeSagana Diop is a fine human being. He probably works hard at honing his craft and has for decades now.

Shoot, just look at this picture he posted of him smoking a hookah on Instagram. I love this guy! I can't be mad at a guy taking a contract that way overpaid him because Mark Cuban loves to give out money to tall people like my grandma likes to give out hard candy to grandchildren. 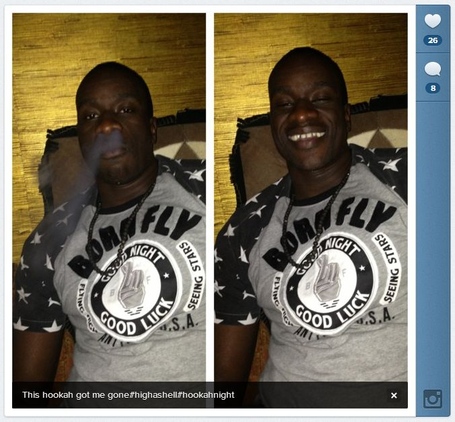 So I hope that in writing this post that people understand I don't hate DeSagana Diop, the person. I hate what he represents. Diop is one of the largest (literally and figuratively) mistakes the Bobcats have ever made, helping lead them on a path to where we are now. Mark Cuban awarded him a hefty contract before I had ever heard his name and in due time, the Bobcats traded for him because they needed the frontcourt size. Lo and behold, Charlotte dealt Matt Carroll and Ryan Hollins for an even more cap space-reducing contract with lesser output. And he still didn't lessen their problems in the paint. It was one of a bunch of shortsighted moves that quickened their pace to a necessary rebuild.

Now Diop has probably played his last season ever in a Bobcats jersey ever. Death, taxes and DeSagana Diop playing embarrassingly poorly were the only constants in Bobcats fans' lives in the past four years. His presence was a lingering symbolic embodiment of mismanagement there to constantly remind us how not to build a team.

"Those who cannot remember the past are condemned to repeat it," philosopher George Santayana famously said. And with every airballed free throw and cringe-inducing mid-range jump shot serving as a painful reminder to years past, DeSagana Diop seemed to only have one purpose on the court: so that the team and fans cannot be doomed to repeat this history.

With that preface in mind, let's begin Diop's season review.

DeSagana Diop is a 7-foot, 300 pound center so it only makes sense that he took zero shot attempts at the rim and attempted as many threes as free throws this season. Sure, that three-pointer was a last second heave as the clock expired, but still. Diop only took 27 field goal attempts, but it's still rather mind-boggling that his closest shot was from six feet out and only had five shot attempts in the paint. He made none of them. Of his 27 shots, 26 of them were jump shots. As a quick reference, here are Diop's field goal percentage on jump shots year by year from this season to his first year with Charlotte, respectively: 30.8, 25.9, 26.7, 0.0. Hey, that's an improvement over four years of ∞%! 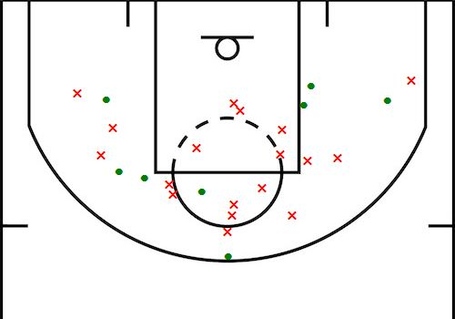 Get this: DeSagana Diop is the only player at least 7 feet tall to have multiple seasons with a FG% at 29.6% or lower with at least 22 games and 266 minutes played.

And it's not his own shooting percentages that hurt. How could the Bobcats run pick and roll plays with a 7-footer who doesn't shoot at the rim and isn't fast enough anymore? Diop's defender could leave him without a worry to hedge as needed to help stop guard penetration, helping trap the offense.

His screens were fine, although I'm not sure how bad they can be if you're seven feet tall and 300 pounds and can stand still.

But I should note that none of this stuff is that pressing because 90 percent of what Diop does on offense is simply standing around and doing nothing. However, it certainly doesn't help a struggling offense when your 7-foot big man who can't shoot a half-consistent jumper only stands out near the elbow and often impedes offensive flow.

It doesn't say much, but Diop way more often had a positive impact on defense than on offense. After all, he does have arms and legs and isn't immobile. As a 7-foot-tall human being, this makes defending the basket easier.

However, Diop still was fairly bad on defense. He was especially bad on the pick and roll, as we can see below in a series of screenshots I took for entertainment and teaching purposes. Class, let's begin with a series in Portland. 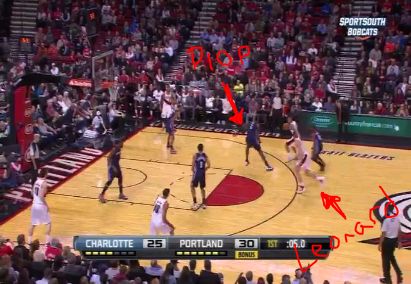 Diop is guarding Trail Blazers rookie center Meyers Leonard, who does have a bit of quickness to him (at least for a center), and steps out to hedge on the pick and roll as Leonard sets the screen. At the time of the above screenshot, Leonard has already started to roll, but Diop is clearly unaware and continues to hedge even though he could play back a bit to cover his man as Kemba Walker recovers to guard Damian Lillard. 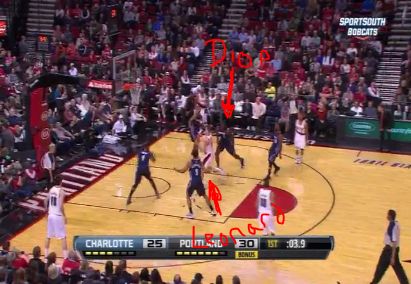 Instead, Diop can only turn around in time to see Leonard receive the pass, take two steps and get a wide open layup in the lane. I did say above that Diop isn't immobile, but that's only because he can out-maneuver a signpost.

Moving on to Sacramento! 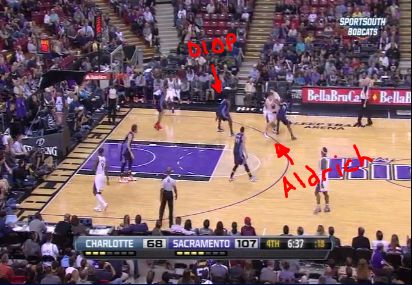 Cole Aldrich, a backup center for the Kings, also took advantage of Diop's special power to grow roots into the floorboards when defending a pick and roll. 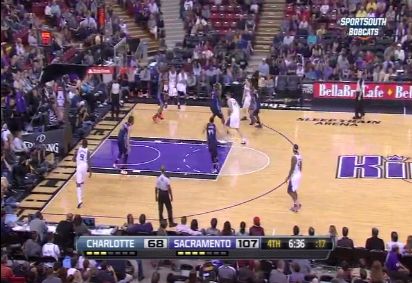 In the above screenshot, the ball has already reached Aldrich's hands and Diop's feet are firmly set facing whoever the heck the guard is who started the pick and roll. All Diop can do is turn his head and watch as Aldrich crashes the lane. 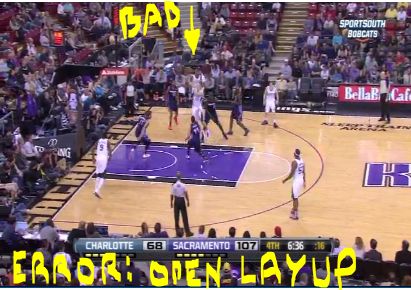 It's a little hard to see but, yup, that's an open layup Cole Aldrich is flying in for. Meanwhile, Diop has just turned his body towards him. Progress!

Regardless, Diop was what we've come to expect, though with the recent disturbing metamorphosis into a poor jump shooter.

This is one of two blocks Diop had on LeBron James in this game alone. He had four total blocks that night on the floor! DeSagana Diop have it all.

I can't give him anything better than a D. He managed to become even worse on offense and with age and a weary body, he's lost the athleticism and quickness that made him a half-way decent defender. Aging is a sad process, but everyone must face it at some point unless you're Tim Duncan or Kobe Bryant.

I wish Diop the best in his future post-Bobcats, assuming they will not re-sign him. However, I am very glad I might never have to watch him play basketball in a Bobcats jersey ever again or sit on the bench in a suit constantly reminding me of embarrassment.