Despite the absence of LeBron, Wade, and Allen, the Heat still find a way to defeat the Bobcats by the score of 89-79

Tonight had a special feeling for both the Bobcats and the folks at Time Warner Cable Arena as the folks from Bristol, Connecticut, made the trek to broadcast this game to a national audience. Yes, this was mainly the product of preparation for the off chance that the Heat's historic winning would reach this far, but it still had that special feeling because Charlotte rarely gets national attention, save for a game or two on NBA TV.

Though the Heat have been one of the hottest teams in the league, they were going into this game without LeBron James, Dwyane Wade, and Ray Allen, who were all sidelined because of various ankle and hamstring injuries. With Miami losing most of their top players, it would seem like the perfect opportunity for the Bobcats to grab a win in front of the ESPN viewing audience. Sadly, that didn't happen tonight.

The Bobcats opened the quarter looking extremely aggressive by penetrating either to go to the rim or to kick it out to an open shooter. To be fair, the Bobcats were ice cold for the entire game, but it still was encouraging to see them so hungry to get to the line. A huge positive aspect of the first quarter was the play of Kidd-Gilchrist on offense. MKG finished with 10 first-quarter points, including a few mid-range jumpers which is a huge key to his future development.

As Charlotte pushed their way to the rim, the Heat were taking a more laid back approach by staying behind the line shooting open threes (as you can see from the chart below). It would definitely make sense that they would since their opening lineup consisted of solid three-point threats like Mike Miller and Rashard Lewis, who combined for 12 of Miami's 26 points in the opening quarter. 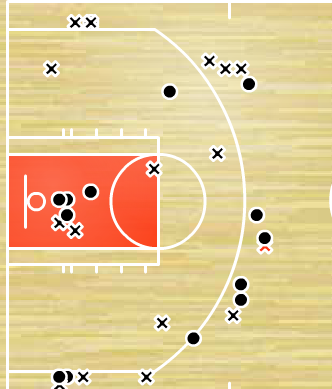 Charlotte went into the second quarter down 26-22 but definitely held their own as the minutes wore on. The big key that kept them close not only in the second but most of the game was their work on offensive boards. As I mentioned before, Charlotte was ice cold from the field (34 percent in the 2nd quarter and 31 percent throughout the game) but the work by players like MKG (four offensive rebounds) and Josh McRoberts (seven offensive rebounds) were enough to keep them in the game until the final buzzer sounded.

Charlotte's had some ugly sequences throughout this season but one moment during the third quarter could possibly be up there as one of the worst. Before I talked about how the Bobcats were aggressive and worked their way to the basket, but they shot an absurdly ugly 18 percent from the field in the quarter. Yes, they worked their way around the basket but they launched some inefficient mid-range jumpers that weren't going in. The offensive woes of Kemba Walker and Gerald Henderson, who combined to shoot 5 for 31 from the field, were a major reason for Charlotte's issues.

Even though Miami only had a 66-53 lead going into the closing quarter, the Bobcats appeared to have thrown in the towel before it even began. Though the Cats brought the deficit within five points in the closing minutes, they were never able to put on a run that would put fear in Miami's heart.

While this game was a disappointment for the Bobcats and their fans, they were just a victim of an awful shooting night that a team like Charlotte or can have on a random night. While Bobcats faithful will quickly want to put this game in the back of their minds, they can still think of the performance of Kidd-Gilchrist (18 points and 14 rebounds) and think there are bright days ahead even though the present may seem bleak.