Whatever it is, everyone loves Bismack Biyombo.

And that isn't to say he's good; he's not. In fact, Biyombo isn't very good at all. He's actually pretty bad.

There were two main schools of thought.

One believed Biyombo was the second coming of Dwight Howard. His physical tools and intensity convinced some that Biyombo would be nothing short of a game-changing defensive presence.

The other believed Biyombo was your traditional bust. He's been playing basketball for less than five years, they'd say. He simply does not have the fundamental skills or basketball intelligence to succeed in the NBA.

As if it's any surprise, Biyombo is a medley of the aforementioned projections. He's not particularly dominant, but his moxie allows him to take over games in small stretches on the defensive end. His offense is a work in progress, however, and in all honesty, that's probably sugarcoating it.

But it's his potential that keeps us intrigued. Let's get down to Bizness (hey look, a joke!).

He's incredibly hardworking, long, athletic, and strong. On the flip side, he has a poor understanding of spacing, doesn't set good screens, has little touch, and he fouls.

Via MySynergySports.com, we know that nearly 50% of Biyombo's offensive possessions are a result of cuts and offensive rebounds. I don't think that surprises anyone. Hustle plays are his forte.

But here's where it gets ugly.

Here's his shot chart from this season: 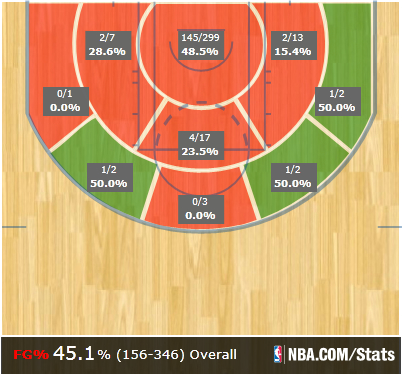 Red is bad, and there's a lot of it. Why on earth does he struggle to score on such easy shots?

When Biyombo gets the ball near the rim, he tends to get low and gather himself. This wastes precious time and allows the defense to recover and bother what should have been an easy shot. Additionally, he fails to use his body as a (legal) weapon to protect the ball. Furthermore, Biyombo keeps the ball low in the paint, which leads to him getting stripped and blocked fairly often.

The proof is in the pudding: This season, 15.3% of Biyombo's shots were blocked, and an additional 16.5% of his offensive possessions ended with him turning the ball over.

Simply put, Biyombo has a one in three chance to be blocked or turn the ball over. If you factor in his poor shooting touch, it's easy to see why he struggles to score.

But no one expects him to be a good offensive player. Not yet, anyway. But where Biyombo does show promise is rebounding and defense.

Biyombo grabbed 15.2% of all available rebounds this season, which is good for 37th in the league among players who have played more than 20 minutes per game in at least 40 games. So while he's not an elite rebounder, he's certainly very good.

When it comes to rebounding, Biyombo is much like a bull that sees a red cape. The second the ball leaves a shooter's hands, Biyombo instinctively crashes the glass, barreling through all players, both opposing and friendly. There are some clear advantages to this, but sometimes his enthusiasm is detrimental to the team. Too often, Biyombo is called for a blatant loose ball foul. Other times, his energy level is so high that he accidentally knocks the ball out of bounds.

It's not all bad. It should be noted that Biyombo's understanding of rebounding fundamentals has improved dramatically since he was drafted. This season, we saw something we rarely saw in his rookie campaign: boxing out.

He still doesn't box out enough, however, and when he does, he tends to commit too heavily to his man and miss the rebound altogether. Believe it or not, boxing out is not an easy thing to teach any player. Boxing out requires a player to make crucial judgment calls on where he should be, who to block out, and how heavily he should commit to boxing out his man.

He'll almost definitely improve in this area, but it's unlikely that Biyombo will rebound at an elite level at any point in his career. Keep in mind that this doesn't mean he's a bad rebounder. It just means he'll never be Kevin Love or Dwight Howard on the glass.

And now, the fun begins. Defense.

The general consensus is that Biyombo is a very good defender who makes mistakes from time to time because he's young. I'm here to tell you that's true.

Why are his numbers down? I'll give you a clue. It won't be a problem anymore.

That's right! Mike Dunlap is the reason. Oh, zone defense. I will not miss you.

The zone can be a very effective defense if perimeter players are willing and capable (not necessarily good) defenders. The Bobcats regularly gave Kemba Walker, Ben Gordon and Ramon Sessions huge minutes this season. They are not good defenders, and this forced the Bobcats' bigs into taking on a considerably larger role on defense. It's really no surprise that the Bobcats' defense worsened as a whole this season.

All in all, Biyombo's sophomore season was bittersweet. He showed some improvement after a slow start to the season and his weaknesses are more apparent. He's not the star or bust anyone thought he'd be, but he's coming into his own and it's a delight to watch.

I'm joking. Here's Biyombo's best performance of the season. I couldn't choose just one play, so I chose his most dominant defensive game.

Pretty straightforward: Biyombo needs to improve at everything. He's not especially good at any one thing, and could use a ton of development in all facets of his game.

There are a few things I'd like to see Biyombo focus on, however.

Biyombo's length is one of his greatest attributes, and by bringing the ball down to gather himself, he negates that advantage. He needs to learn to keep the ball high. Amir Johnson is an excellent offensive rebounder and incredibly efficient at scoring on put-backs because he keeps the ball high and away from shorter defenders. It's a skill that many young players don't have today, and the reason many bigs struggle to score inside despite a huge size and strength advantage.

Biyombo would also benefit from repetition of one of the simplest drills in the world: the Mikan drill. For those unfamiliar with the Mikan drill, it's simple. A player stands under the rim and puts up a hook shot with his right hand. The player then catches the ball and immediately goes up with his left hand. The player repeats these motions over and over again. That's it. While it's undoubtedly one of the most basic drills in basketball, it develops a familiarity with being under the rim and improves touch with enough repetition.

Touch is a funny thing. To some extent, it's an innate skill. But you can develop it. One of Biyombo's problems is his shooting motion. There is no consistency in it. His elbow is almost always somewhere it shouldn't be, and this can be corrected by the Bobcats' coaching staff. Seriously, check out any picture or video of Biyombo taking a hook shot or layup. That elbow, man. It's hard to watch.

Lastly, I'd like to see Biyombo work on some basic post moves. A simple and consistent hook shot and a counter, such as the up-and-under. Working on his post game is pointless unless his touch and footwork improve, so this should be the last thing Biyombo works on.

I found it difficult to settle on a grade considering Biyombo's up-and-down season, but I'm going with a solid B. He has some pretty blatant weaknesses, but we saw signs of consistency late in the year that should translate to future seasons.

As for his future, Biyombo is one of the Bobcats' core young players along with Kemba Walker, Michael Kidd-Gilchrist and Jeffrey Taylor. His ceiling is absurdly high, but his basement is as low as his ceiling is high. It remains to be seen if Biyombo develops into the defensive machine Rich Cho envisioned he'd be, but since the Bobcats are unlikely to become a contender any time soon, this isn't an issue.

I imagine he's not untouchable by any means, but he should be a part of the Bobcats' core going forward. He's only 20 years-old; his prime is nearly a decade ahead of him.