Michael Kidd-Gilchrist fought through an up-and-down rookie season, but finished strong. Do we know enough yet to have any idea of what he can become?

Michael Kidd-Gilchrist's rookie season was filled with all of the ups and downs NBA newcomers typically experience coming into the league. Considering the fact that he was the youngest player in last season's draft and also that he was thrust into a starting role immediately, Kidd-Gilchrist handled his rookie campaign well. Really, he came as advertised out of Kentucky, for better or worse. We knew he would bring good athleticism and hustle, but would likely struggle with his jumpshot, which he did. Yet, despite these struggles there is still a lot to look forward to with Michael Kidd-Gilchrist.

Kidd-Gilchrist and the Bobcats were two of the NBA's biggest surprises in the month of November. In fact, Kidd-Gilchrist was voted NBA Rookie of the Month for November for starting all 15 games and averaging 10.9 points per game and 6.5 rebounds per game on 45.5 percent shooting as the Bobcats managed to hover around .500 at the time. This was also a time we talked about rookies other than Damian Lillard and Anthony Davis. Weird, I know.

In December, Kidd-Gilchrist continued to build upon his strong NBA start as he brought his field goal shooting up to 56.2 percent while also dishing out an additional 0.6 assists per game. For a player that is mostly a small forward, 56.2 percent is pretty darn good, even if we're only talking about a fifteen-game sample.

Now 30 games into his career, Kidd-Gilchrist finally ran into the infamous Rookie Wall he had heard so much about. His shooting percentage dipped to the low-thirties and suddenly his shot was called into question once again. On top of all of that, he finished January averaging a full rebound less per game. Thankfully January was over, right? Wrong. In fact, with the way his February would go as far as the concussion, 30.9 percent shooting and reduced minutes, I'd bet Kidd-Gilchrist was probably wishing that January would return. It was really that bad. To be fair, he was not the only Bobcats player dealing with injuries at this time, and injuries to the team's big men really affected the driving lanes he could get where he is most effective. Of course, this put more pressure on Kidd-Gilchrist, and given his ability to create his shot at this point, he saw his minutes cut in addition.

A rookie has two choices once he hits his rookie wall: push forward or let it get the best of you. Thankfully, Kidd-Gilchrist chose the former and was rewarded with production that mirrored the figures that won him Rookie of the Month earlier in the season. It was a long and trying season for the youngest player in the league, but he bounced back well and finished the final twenty-four games of the season strongly.

As you would imagine. Kidd-Gilchrist shone brighter the closer he played to the basket than not. According to MySynergySports, he was most effective on types of plays including: cuts, offensive rebounds, hand-offs and in transition. In each of those areas, he shot between 50 and 64.5 percent. As far as points per possession, he put up excellent numbers in those areas as well with averages of 1.18 in all but Cut plays where he averaged 1.19 PPP. Be happy - those numbers are above average.

Defensively, Kidd-Gilchrist was the common denominator in the Bobcats' top two defensive lineups, which also happened to be their top two most used lineups. Yes, they had top defensive linueps. Be nice.

Where He Can Improve

Hmm...it's so hard to think of any one thing. I just can't put my finger on it. Oh, no! Look below! That tree is on fire! 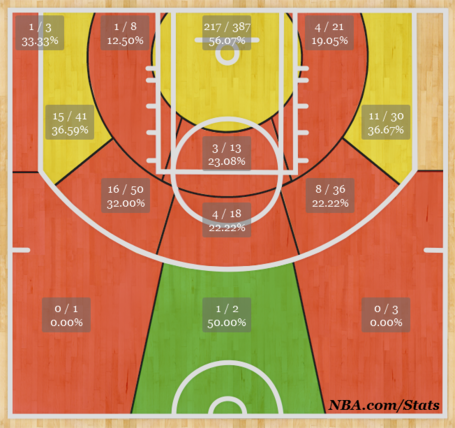 Oh, my bad; that's not a fire. That's Kidd-Gilchrist's shot chart for the season. Fortunately they say that the easiest thing for a player to improve upon is their jumpshot. I mean, this can't get worse, can it? I just hope that Mike Dunlap benching Kidd-Gilchrist automatically for fourth quarters of games doesn't permanently damage his confidence in his shot because he is so young.

Two things stand out about the NBA Stats chart above: 1) He didn't take enough threes above the break being a 50 percent shooter (joke); 2) 56 percent within ten feet is pretty bad, but that's slightly misleading. Look at this table from Basketball-Reference.com.

What's this? 62.7 percent shooting at the rim on 314 attempts? That's actually almost three percentage points above average. Now, the NBA Stats shot chart isn't wrong; it shows data from 8-feet-and-in, which we see is where Kidd-Gilchrist began to struggle last season in terms of shooting. This is why it's helpful to cross-reference multiple sources although both obviously tell us he needs to improve his shooting. Here's the thing about that: Look at the shot locations on the Basketball-Reference table and then look at the number of attempts. Hopefully you noticed that the places in which he shot the most he also shot the highest percentage, and that should be somewhat encouraging because he may just need the repetitions. The Bobcats, and ourselves, will have to be patient with Kidd-Gilchrist because he's a long ways away from average from just about anywhere on the floor. However, he is a 45 percent shooter now and it's not crazy to think he could raise that figure towards the mid-fifties if he improves.

In order for Kidd-Gilchrist to actually improve he will need a coach who is going to let him miss some shots in order for him to build that confidence. It's no more helpful than benching to say "Oh, we'll work on this in practice tomorrow so just cut to the hoop today," because being able to shoot well in a game situation is something completely different than practice. Right now he's mostly playing within himself and only scoring at the rim (below), which means he's getting high percentage looks, but you also want him to be comfortable shooting from range. 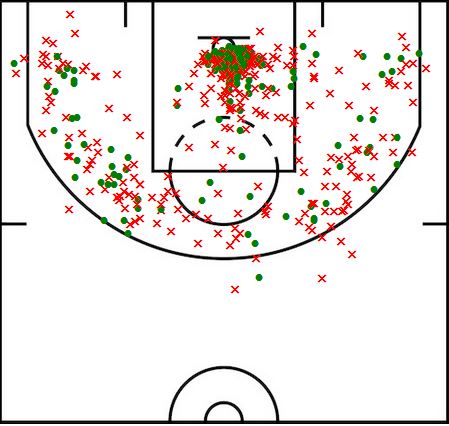 Considering Kidd-Gilchrist's full-body of work this season, we have many reasons to be optimistic about his future. Is he a superstar? Probably not. Would you be happier to have him on your team than playing your team? I would agree with that. If you're still not convinced, here is Michael Kidd-Gilchrist's rookie season stacked against Richard Jefferson's, who went on to be a productive NBA starter for nearly a decade.

Right down to both players being named Rookie of the Month one time, these two are surprisingly similar. Percentages, shot attempts, turnovers and assists are almost identical. Per 36 Michael's fouls per game are much better and he is also a better rebounder than rookie Richard Jefferson. Jefferson was also terrible away from the rim as a rookie, too. The thing is, it takes time for players to develop. Do you know what Jefferson shot from three during his sophomore season? Twenty-five percent. However, he kept shooting and is now a 37 percent career three-point shooter. Yet, perhaps the most encouraging factor in-play here would be that Kidd-Gilchrist is almost four years younger than Jefferson was during his rookie year.

As long as Kidd-Gilchrist gets the proper developmental crew around him, there is a ton of hope for his future. He has the right attitude and the physical tools to get there as well.

Alright, if Kemba gets an A-, and if MKG is the Bobcats' second-best player, he should get a B- right? Think about it. He earned Rookie of the Month honors, fought through a massive slump and a concussion, and wound up finishing the season strong. Plus, he gets puppy points for the one he adopted during the season.