Reggie Williams is a lot like you and me. All he wants to do is have a good time. Some people are just content with sitting around, whether it be on a sofa or a bench. 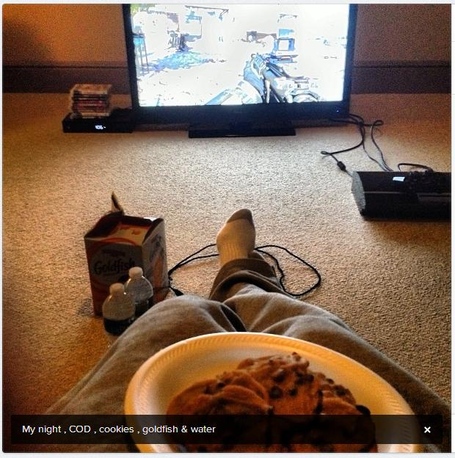 I want you to look closely at that photo. If you look carefully you'll notice that Williams' cookies are homemade, which suggests that he knows how to bake. This is encouraging, even if the average chocolate chip cookie has roughly 10 grams of sugar in it. I guess you don't need to be in the greatest shape when you play a mere 10 minutes in less than half of your team's game. I'm just happy Reggie's happy.

But there's a problem. I don't know Williams personally but this photograph suggests that he is not an environmentally friendly lad. See that 8" styrofoam plate? Those two bottles of water? That's not a good look in 2013.

There's one more thing I want you to notice. Williams' weapon of choice in Call Of Duty is the M16A4. I'm no gun nut, but I play a lot of video games and know that this particular assault rifle is highly accurate and most useful from long range. A lot like Reggie, really.

No matter the sport, Reggie Williams is a natural scorer. 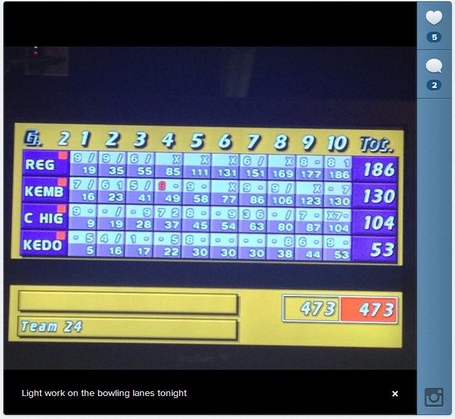 I don't know who KEDO is, but Reggie Williams tripled his score. That's nothing against KEDO. I'm sure he's a nice guy. It's just that Williams is an excellent bowler. The fewest number of pins Williams knocked down in a turn was eight. He also had four spares and four strikes.

Give him a ball, and Williams will score.

Oddly enough, Williams is a decent play-maker as well. Long regarded as a gunner, Williams' 3.7 assists per 36 minutes may surprise some people. I don't know where he developed a reputation as a selfish gunner, but it's largely inaccurate.

But that's not news. We knew that.

What's interesting is this: Williams took 131 field-goal attempts this season, and 33 percent of them were spot-up 3-pointers. He converted a solid 37.2 percent of them, too. The rest of Williams' offense is pretty evenly divided, although he does show promise in the pick-and-roll (1 Point Per Possession on 19 possessions) and in transition (1.04 PPP on 23 possessions). He didn't get many opportunities in these areas last season (and really, not many opportunities in general), and I'd like to see what he's capable of as a larger feature in the offense.

But here's where things go downhill for Williams: He's an abysmal defender.

Overall, MySynergySports.com has Williams ranked as the 255th best defender in the league, which is a fancy way of saying he's very, very bad. It's not entirely his fault; Williams is flat-footed and not very quick. Sadly, genetics are not on his side. Where it is his fault, however, is his awareness. Too often, Williams completely loses track of his man and because of his less than ideal physical tools is too slow to recover. This can be seen in Williams' horrid 1.08 PPP allowed on spot-up opportunities, ranked 300th in the league.

Not a lot you can say about Williams. He's a very good offensive player, but a very bad defensive player. You know, the stereotype.

I scoured YouTube to the best of my ability and found absolutely nothing of interest. A couple made threes, a layup, and a turnover. Nothing worth sharing.

Yes, they have Reggie Williams interviewing Kemba Walker. I am especially fond of how animated Williams is when he talks. Contrasts his monotone voice well. I also like how Williams pronounces Under Armor.

Things to work on

It's not easy to improve on defense. But somehow, some way, that needs to be Williams' goal.

Future with the team and grade

Let's be honest. Williams is not in the Bobcats' future. He was most likely a stop gap until the Bobcats found a replacement for him. With his contract expiring, I imagine the team will look for other options. Williams is a niche player, able to flip a game on its head with a few key buckets and assists. However, if you keep him in too long he'll be exploited on the defensive end. The Bobcats have plenty of scoring already. I like Williams, but he's not needed.

In terms of a grade, I'd give Williams a B-. It's hard to give him anything else. It's a passing grade but not a very good one. Williams was available when needed, was by all accounts a good locker room presence, and he reminds me of James Harden for some reason. So yeah, a B- seems about right.