With a glaring need at the center position the Bobcats may be targeting the Sacramento Kings' DeMarcus Cousins.

On Thursday, ESPN's Chad Ford reported that three teams have been gauging the Kings' interest in parting with 2010 number five overall pick DeMarcus Cousins. The Cavaliers, Mavericks, and of course the Bobcats are reported to be among those interested. The Mavs apparently view a Cousins trade as a fallback plan in case they miss out on Chris Paul and Dwight Howard. What would they trade? I'm not sure since they don't have a ton of assets, and you can't deal raw cap space, of which they have plenty. The Cavs have a few more assets than the Mavs including two first round picks this year and young players that the Kings may find attractive.

As for the Bobcats, Ford says that they may be looking to put together a package centered around the number four pick, which tells us that they may not be crazy about any of their options there, especially in the frontcourt, and that they may view the center position as a bigger area of need than the perimeter.

Cousins has one year left on his deal, which makes surrendering a high lottery pick a bit of a steep price even in this draft. However, the Bobcats desperately need a center, and despite his flaws, Cousins would be their best big man. Cousins can rebound and the fact that he led one of the league's worst defensive teams in Defensive Rating with a 106 is encouraging.

However, for a team that struggled with efficiency, Cousins may not help right now. Look at the chart below: 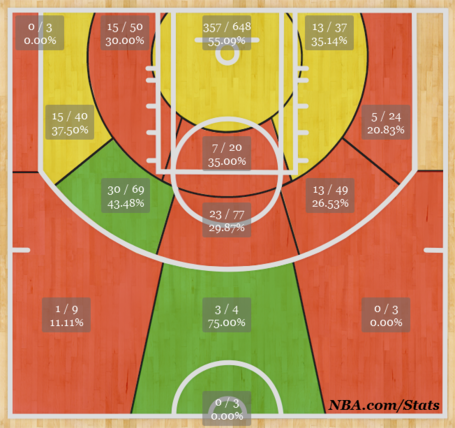 As of now, he's still below average from just about everywhere on the floor. He's just below average from the right block and at the rim, but the fact that he's above average from the left-elbow is encouraging that he can add that range. Considering how the Kings' Tyreke Evans and some of their other prospects have developed slowly or regressed, this may not all be Cousins' fault. It's important to remember that Cousins won't turn 23 until August and since big men sometimes don't develop until they're in their mid-twenties, there may be plenty of time for Cousins to improve his efficiency.

Further, the Kings didn't get much help for Cousins in the way of ball distribution. The Bobcats weren't masters of crisp passing either, but had a higher percentage of assisted made field goals on the season, per HoopData. And the King's best passers were Isaiah Thomas and Toney Douglas, who had assist percentages (measure of the percentage of teammates' field goals a player assists on) of 24.6 and 23.8 percent, respectively. For comparison's sake, Kemba Walker's assist percentage last year was 31.2 percent. Cousins is a very talented player, but good passing is required whether in taking advantage of post position, pick and roll or spacing the defense to make players even more efficient.

Part of improving that efficiency will be getting that 28% Usage Rate down and cutting back on turnovers as well.

The biggest concern with Cousins is that he is an emotional player, sometimes to a fault. I wouldn't label him a headcase by any means, but if he continues to mature and control his emotions while simultaneously working out the flaws in his game he could be a risk worth taking. If the Bobcats are debating pulling the trigger on Cousins they are surely taking into consideration his possible effect on the young locker room.

The idea behind a Cousins trade by the Bobcats intrigues me because he could fill a need and I still feel that he still could have a lot to offer this league given his age. Considering the Timberwolves paid the price of a pair of second-rounders to the Heat for Michael Beasley a couple years ago, the number four pick seems like a steep price, but there would likely be more to the deal than just that. If the Bobcats could find a fair deal to acquire Cousins for a year and see if he could be their answer at center, then it's worth it. Especially if they feel better about him than drafting Alex Len or Anthony Bennett.