Wow, what a name!

This season -- Jeff Taylor's first after being drafted in the second round out of Vanderbilt -- has been pleasant for the young player, but still not great. Three quarters of the way through the year, Derek had a nice piece about his progress.

Oh, his name's kind of boring, too. (Ed. I disagree. The unconventional spelling of Jeffery is terrific! - Ben)

This season, in 19.6 minutes of play per game, Taylor averaged 6.1 points on 43.1 percent shooting. Now, those aren't fantastic numbers, but for a rookie drafted in the second round that's about the best you can expect to get. Taylor and Khris Middleton of the Pistons both averaged 6.1 points this season, the most from any second round pick of the 2012 draft. Once in a while, you get a very good player out of the second round (Nikola Pekovic, Marc Gasol, Paul Millsap), but as a fan, you can't bank on that happening. Bobcats nation should be pleased with Taylor's performance this season.

Looking at Taylor's shot chart this season, he has lived up to the type of player that scouts thought he was. He's good at the rim and just above average from three-point range, but needs a lot of work on his mid-range game. 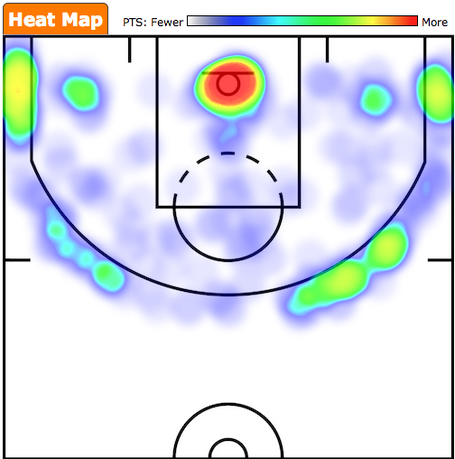 This heat map via Basketball-Reference lets us see how much he scored in the paint and beyond the arc, but how sparse his points were anywhere else. He only shot 29.9% on mid-range attempts, but only 26.8% of his shots were from mid-range (via nbawowy).

In fact, his offense was slightly above average but only because Taylor picked his scoring opportunities with a careful eye. More than 60 percent of his plays on offense were spot-up shots or in transition (via MySynergySports.com). With transition scoring so important, it makes sense that he was fairly efficient on the whole. His spot-up shooting was a mixed bag. More than half of these shots were three-pointers, 36.1 percent of which he connected on. However, because of mediocre midrange shooting, his overall FG% was a subpar 37.1 percent. However, because of the extra scoring of three-point shots, Taylor did well on points per possession.

Taylor doesn't take up a lot of possessions, so most of his looks on offense are built off of plays started by others and finished by him in transition, off a screen, cutting or spotting up for a kick-out pass.

He's also pretty solid on defense, though not a dominant defender. Taylor's very active, has great lateral quickness and terrific athleticism. Opposing teams score 4.6 more points per 100 possessions with Taylor on the bench with an effective field goal percentage 2.1 percentage points better than when Taylor's on the floor. It may seem minor, but the defensive impact is there. He is a bit green as a rookie, so as he adds experience, he could become even better.

As I said in the season analysis portion, Taylor needs to round out his offensive arsenal with better mid-range shooting. He also needs to work on his passing. Taylor may be a forward, but he's already got the shooting tools, so good passing would make him even more of an offensive threat.

On defense, there aren't any big issues either. He was known coming into the draft as a lockdown defender, and he's held his own in the NBA. The Bobcats' upside of drafting Taylor was that he's such a well-rounded player, and he's come to play.

The only thing that Taylor needs to work on is just general improvement of his skills. He needs to sharpen up his shooting and learn defensive rotations better, and he should be fine. I'm convinced he'll develop a lot more over the offseason.

Taylor was solid this year. He wasn't a superstar, but he also was pretty important to the team while Kidd-Gilchrist went down and ended up playing almost 20 minutes per game all year. He didn't receive a lot of criticism, rightfully, because he was a solid player all year. Let's give him a B.

Taylor has a lot to improve on, but every aspect of his game is at least serviceable.