Kemba Walker is electrifying. At his best, he's a ball-handling savant with an unstoppable mid-range jumper. At his worst, he takes the role of an erratic young player in a league that is not kind to young players. That's the thing with Walker. For better or for worse, Kemba's explosive nature is both the root of our fascination and his Achilles heel. However, hard work prevailed as Walker relentlessly eradicated the prime criticisms of his game: an underdeveloped passing game, inefficiency and shoddy defense.

Walker's bread and butter is his insatiable quickness and pristine ball-handling skills which allow him to get off a jumper against nearly any opponent. He's like a shooting machine on skates. According to mySynergySports, Walker's 0.78 points per play in pick and roll situations when he was the ball-handler ranked him the top-100 during his rookie campaign. This season, that figure increased to 0.87 points per play as his ranking shot up to 33rd in the league. Not to mention that his 0.82 points per play in isolation is good for 84th in the league.

The problem for Walker and guards of his mold is that his greatest strengths represent the pillars of inefficiency in today's Morey-fied NBA. One-on-one basketball and a plethora of midrange jumpers are widely regarded as the least efficient plays in basketball. Luckily, his game has seen at improvements in both of these fronts. Walker's isolation plays have decreased from 13.5% of his possessions last season to 11.7% of this season.

It's a marginal decrease at best, but here's why it's truly impressive: It appears that some of what used to be Walker's isolation plays become more pick and roll situations. The number of possessions that ended with a shot attempt in the pick and roll increased from 31.5% to 35.8%. Despite this increase, both the proportion and number of shots he's taken from the 16-23 feet range have decreased according to HoopData. In his rookie campaign, 3.7 of Walker's 11.6 field goal attempts came from the dreaded mid-range area. This season, 3.3 of his 15.1 field goal attempts came from the same area. That's a 10 percent decrease. It's also worth noting that Kemba's efficiency from that area increased from 34 percent to 41 percent, putting him above the league average for point guards.

His shooting percentages from the field and beyond the arc went from 36.6 and 30.5 in his rookie year to 42.3 percent and 32.2 percent. He's also taking on a heavier load on offense and scoring 5.6 more points.

But let's be honest. It doesn't take a deep statistical analysis to see how much Walker has improved. His feel for the game has unquestionably improved, as has his ability to make something out of nothing. We know that Walker can put the ball into the basket, but what often goes ignored is how much he's improved his play-making ability.

We've seen a raw improvement in his numbers: His assists per game have increased from 4.4 to 5.6. Even though he's passing the ball at a more effective rate, playing more minutes and carrying a heavier offensive load this season, his assist-to-turnover ratio remains virtually unchanged at 2.45. Not only that, but the distribution of his dimes has taken a turn for the better. Last year, just 1.6 and 0.4 of his assists came at the rim and beyond the arc, respectively. This season, both of those figures have increased to 2.3 and 1.2, giving Walker an assist+ rate of 6.2 (via HoopData).

Walker has improved considerably in all facets of the game, but the areas in which we've seen the most change are also the one's in which he still has a long way to go.

Kemba's affinity towards the midrange jumper has decreased over the span of his short career, but 21.8 percent of his shot attempts still come from the 16-23 feet range. To put that into perspective, that's right around seventh in the NBA among teams. Among point guards, he's top-15 in shot attempts from that area and only six of those players shoot the ball at a lower clip than he does. And one of them is Brandon Jennings, so you know. Only Ricky Rubio, Avery Bradley, Brandon Jennings and Mike Conley have a lower conversion rate at the rim than Kemba (55.5 percent) among starting point guards. One of those guys spent half of the season recovering from a torn ACL, another makes his money on the other side of the floor and another is Brandon Jennings. Kemba would be better served by turning that long two into a three and more importantly, abandoning his floater. 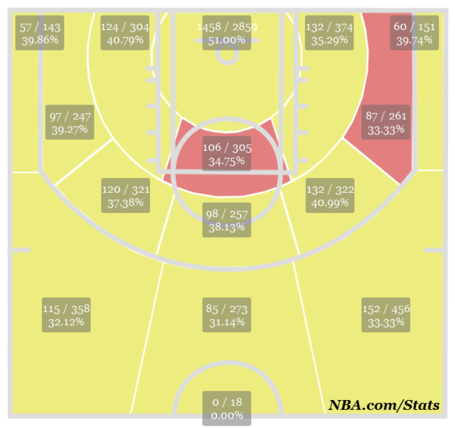 A sea of yellow. It's not often that a player's shot chart embodies the words, "league average" but here we are. The problem is that being an average midrange shooter translates into a slightly below average offensive output. In fact, unless your first name is Chris or Dirk, there's no way the 18-footer should be a staple of your offense.

Walker's improved considerably on this front, but his 42.3 field goal percent is still below average especially for a player that aspires to be elite. The interesting thing about this is that Walker is a considerably better scorer at home than he is on the road. It's natural for a player to feel more comfortable on their own home court but it's rare that the statistical discrepancies are as pronounced as his. Walker scored 19.8 points per game on 45.5 percent shooting from the field, 37.8 percent from beyond the arc and a 55.6 percent True Shooting percentage at home. On the road, those numbers decrease to 15.7 points on a 38.9/26.8/47.5 line. Walker's production drops from "Jamal Crawford on a good night" levels to "Ben Gordon every single day ever" just on the basis of his location.

Obviously, a great deal of Walker's improvements will come from increased consistency and confidence -- a product of growth and good coaching. His willingness and ability improve in regards to efficiency will likely determine Kemba's ceiling as a scorer, but he's already among the upper echelon in terms of scoring point guards. The deciding factor in Walker's potential leap from "good" to "elite" will likely be the other side of his offense: play-making.

As I mentioned above, Walker has improved as a playmaker more than most people have cared to notice. At the same time, his improvements are going to have to be a lot more noticeable in the future for them to have any sort of long-lasting impact. The next step after ditching his midrange jumper will be finding the roll-man at a better rate. His 5.7 assists per game, while notably better than last year, are still a full assist below the estimated league average among starting point guards.

Right now, Kemba Walker is about a portion of his potential realized. His improvements have been marked and impressive. As Kemba transitions from a young star to a veteran, so too will our expectations. But for now, I'd be hard-pressed to ask much more of Kemba's second season in the NBA. Growth is a process and Kemba's taken a notable step in every dimension of his game. I'll give him an A-.

The coming years will tell us whether Walker is just a good player on a bad team (an adage I don't particularly agree with) or an offensive dynamo with a heart of gold. Either way, we'll blessed with killer crossovers and extensive scoring moves throughout the journey.