Tyrus Thomas was all about that suit and tie life while Jeff Adrien preached the grit and grind lifestyle. Oh yeah, they also played some basketball or something this season and I'm here to talk about it.

The tale of a promising young prospect fluttering out like an old fluorescent light has been told far too many times. These are the kids who are given the keys to the city but end up disappointing the fans who put their faith in them. A man that fits that description perfectly would be Tyrus Thomas, the 4th overall pick in the 2006 draft by Chicago. Thomas stuck around with the Bulls for a majority of three seasons before being traded to the Bobcats in a 2010 trade deadline deal where Charlotte gave up Flip Murray, Acie Law and a protected future first round pick.

Saying that Thomas has been a huge disappointment with Charlotte would be an understatement; He was brought in to be the athletic forward of the future but has turned into a very expensive disappointment.

This is going to be a tough one to write because it's tough to analyze a player who spent a majority of the season on the bench in a suit or not with the team at all. Tyrus Thomas played 26 of the team's 82 games while averaging 13.2 minutes.

Since his college days at LSU, Thomas really wasn't known to be much of an offensive player but he just fell off the face of the earth with an True Shooting Percentage (TS%) of 41%. Where things strange is the fact that 38% (stat per MySynergySports.com) of Thomas' shot attempts were spot-up shots, of which he made 36 percent. Though there are a good amount of frontcourt players that work best from around the perimeter, Thomas has never really been that since his days in Chicago.

One of the flaws that comes with being a perimeter player is the inability to be in the paint to crash the boards. That was at center stage this year with Thomas. His 9.5 TRB% (Total Rebound Percentage) was the lowest of any frontcourt player on a Bobcats team that finished 27th in the league in total rebounds.

Like I've previously said, it's tough to judge the performance of a player if he's rarely in the game, especially if you're talking about defense. That can be said about Thomas because his opposing player scored 1.08 PPP (Points per possession) against him on 74 overall attempts. Tyrus has always been known as an above average defender so this is probably an example of small sample size.

Play of the Year

Let's just say that this clip is a good example of Thomas' stint with this team and just move along.

At this point in his NBA career, I think it's safe to consider Tyrus Thomas to be a lost cause. He'll be entering his 7th NBA season next year and while he'll only be 27, it's really tough to see him as a rotation player after his last two years with the Bobcats. On court, Thomas has just been a bad offensive player which could change if works on spending some more time in the post.

Grade and future with team

The Bobcats have a few expensive veterans like Thomas on the payroll (i.e Ben Gordon) but it's pretty much inevitable that Thomas will be amnestied this offseason. His future as a Bobcat was pretty much set in stone in mid-March when he was told not to join the team on their road trips even though the team has been weak in terms of front-court players. Overall I give him an incomplete because he played so rarely with the team.

Though he's only going to be 27 at the start of next season, I think this could mark the end of the NBA career for Tyrus Thomas.

As a writer for Ridiculous Upside, I get excited whenever a D-League player gets called up to the NBA and it was no different with Jeff Adrien. I really wasn't expecting much out of Adrien besides being a rotation player that came off the bench to do the dirty work and he did exactly that.

Adrien was signed to a one year contract by Charlotte on December 7th, 2012 to help add depth to a frontcourt that was lacking in terms of depth. Jeff Adrien was put on the court to use his strong 243 pound frame to crash the boards. And he did just that with a team leading 15.7 TRB%. He's a bruiser but he also has to work with the fact that he's only 6'7, which is about the normal size for a small forward, a position Adrien is definitely not suited to play.

Adrien is somewhat lacking on the offensive side of the ball because he's mainly used as a spot-up option (46 percent of his shot attempts were spot-up looks) even though he shot around 41 percent. You really don't want to depend on him much but he was able to knock down the occasional mid-range jumper, even though he was nowhere near efficient (shot chart below). 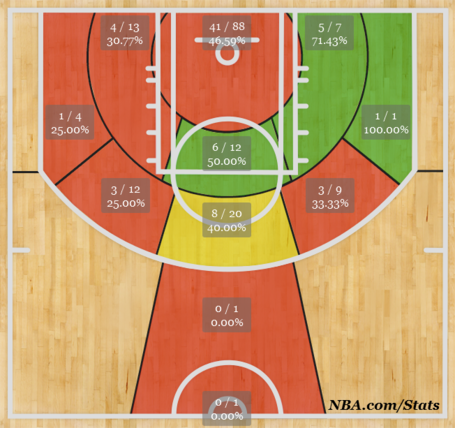 I believe it's safe to say that Jeff Adrien is a mixed bag defensively. Like I said previously, Adrien is too undersized to work as a PF but not quick or athletic enough to be a SF so he's just kind of there most of the time. It's also tough to judge his defensive capabilities for the simple fact that 46% of the shot attempts against him were spot-up looks that mainly consist of mid-range jump shots.

Play of the Year

This may have been Adrien's 2nd season in the NBA but he's going to be 27 when the 2013-14 season begins so what you see is pretty much what you'll get. Although he's probably never going to get starting minutes for any NBA team, Adrien could be more productive if he's used in more pick and rolls because he's mobile and can space the floor for the occasional 18-foot jumper.

Grade and Future with team

For the minutes he played on the court (averaged 13.8 MPG), Adrien fit into his role on the court perfectly fine. His basic statistics really don't look that great in the grand scheme of things, but he was put on the team to crash the boards and that's what he did on a nightly basis. He helped the team with their biggest weakness and for that reason alone I give him a solid C+.

Adrien was signed to a one year contract when he was brought up in early December so he'll be an unrestricted free agent on July 1. He might get some small offers from a variety of teams because of his rebounding ability but I would like to see him back in with Charlotte as they continue to improve their team.