Bismack Biyombo was asked to take on a larger role than ever last season but didn't shine as many expected him to. With improved teammates in the frontcourt, new Bobcats coach Steve Clifford's new role for Biyombo could pay dividends to both the team and player.

Back in February I admitted I wasn't crazy about Bismack Biyombo. That may have been a little unfair because he is only 20 years old and was asked to do far more than his current stage of development should be asked to do. Perhaps what I meant to say was that I didn't like Biyombo in his current role with the team. Fortunately, after the additions of Cody Zeller and Al Jefferson, Biyombo's role with the Bobcats has changed, and that's better for both Biyombo and the Bobcats.

As we know, a big issue for last year's Bobcats was the imbalanced scoring between the frontcourt and the backcourt. The lack of production from Biyombo and their other big men motivated the Bobcats to upgrade this summer. Out went the likes of Byron Mullens and Tyrus Thomas and in came Zeller and Jefferson.

That leaves Biyombo as the only holdover in the frontcourt (aside from Brendan Haywood, who in the grand scheme of things doesn't really count).

Last season, Mike Dunlap showed faith in him, but Biyombo still saw a dip in his Usage Rate from the season before despite starting more games and playing more minutes overall. For whatever reason, the Bobcats were a developing team that wasn't doing enough to get Biyombo -- one of their key prospects -- more repetitions in an area of weakness. As a result, Biyombo posted a horrendous 0.79 points per possession offensively last season and still looked timid with the ball in his hands -- even in the paint. 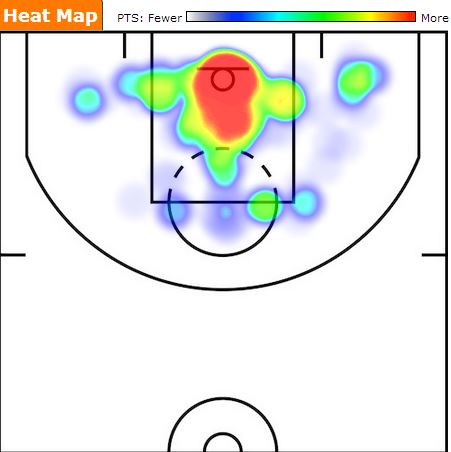 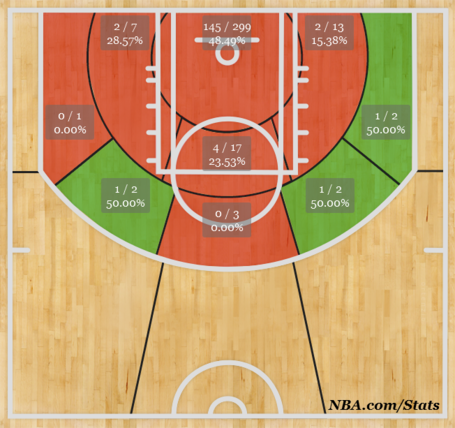 This may not all be Dunlap's fault, but he didn't really help Biyombo. The lone spot of encouragement is Biyombo's shooting percentage within eight feet of the rim is 48.49% (which is roughly a percentage point and a half below average). According to Basketball Reference, Biyombo posted an eFG% of 58.2% at the rim. It's still not great, but at 20 years old there's hope that he can post an average mark of efficiency for his position. And let's be fair and not worry ourselves about his midrange game just yet.

But we have good news, too. New Bobcats head coach Steve Clifford told the Associated Press that he does not want Biyombo to worry about scoring because of Zeller and Jefferson and to focus more on bringing rebounding and defense off of the bench. Ideally, this enables Biyombo to score in easier ways like off of cuts (0.9 PPP last season), transition offense (1.2 PPP last season) and offensive rebounds (1.00 PPP last season). Basically, any way that doesn't ask him to directly create the shot.

Rebounding was one area Biyombo actually did improve in last season. In just four more minutes per game Biyombo elevated his rebounding per game average from 5.8 in 2012 to an impressive 7.3 last season. He also finished second on the team in rebounding percentage. If Biyombo continues to improve his rebounding this season, he'll be able to get more those high-percentage looks at the basket that he needs to boost his confidence. But since he'll be playing next to Al Jefferson -- a terrific rebounder in his own right -- there may be fewer rebounding opportunities for Biyombo. Then again, Kevin Love was able to grab 11 rebounds per game while sharing the frontcourt with Jefferson, so Biyombo might be just fine.

But defense is where the Bobcats will really need Biyombo to leave his mark. Playing next to Zeller and the slow-footed Jefferson, help defense and rim protection will be critical to the team's success. Per MySynergySports.com, Biyombo fared well against the pick and roll and post-ups, compiling PPPs of 0.87 and 0.83, respectively.

Communication will be huge this season. Fortunately, Biyombo was very vocal on defense in this year's summer league and was able to anchor the defense and clean up late rotations in small stretches. Having a 7'6 wingspan and 9'3 standing reach doesn't hurt either. Between his physical tools and one-on-one time with assistant coach Patrick Ewing, Biyombo could really carve out a nice niche on this team going forward.

The idea of Bismack Biyombo playing a smaller role this season is something I'm open to. There will be less pressure to score next to Jefferson and Zeller, so he'll also be able to focus and improve in the areas of his game that he's already good at. And since Biyombo didn't improve his offensive numbers in more minutes last season, it may not be a bad idea to have him take a back seat. Perhaps he'll never be much of a scorer offensively, which would mean he'll likely never start for most teams (unless he turns into 2004 Ben Wallace), but taking pressure off of him could lead to improved efficiency and boosted confidence.

Being only 20 years old, Biyombo has a lot of basketball left to play in his career. Maybe I was too harsh on him. Maybe it was his role that I took issue with. Thankfully, it sounds like Steve Clifford wants the young center playing a role that is mutually beneficial to the team and the player.