Coming off a much-needed win over the Orlando Magic, Charlotte takes on the best team from Florida: the Miami Heat. Can the Bobcats stop the freight train that is LeBron James?

Will the Bobcats be able to stop LeBron James and company on the offensive end? In January, James is averaging 28 points, 5.7 rebounds and 5.9 assists thus far. That is going to be the main key for Steve Clifford's defense on Saturday night against the Miami Heat.

Coming off a thrilling 111-101 win over the Orlando Magic, Charlotte needs to keep the momentum going against the back-to-back champions.

Looking at how Miami has done recently, they have struggled mightily. They had a three-game losing streak against the Knicks, Nets and Wizards (yikes), before it was snapped Friday night against Philadelphia. The lack of offensive efficiency from Miami bodes in Charlotte's favor if this becomes a defensive struggle. I have to like the defensive-minded Clifford drawing up a good plan if it becomes the first one to 90 points.

Overall, Miami -- like a lot of teams -- have dominated the Bobcats in their overall head-to-head series. In 37 total games played, the Heat lead it 27-10 (72.9%). Back in December, the last time these teams met, Miami pulled of a squeaker with a 99-98 victory.

If Kemba Walker actually missed the free throw he tried to miss at the end of that game, maybe the ball bounces perfectly and the Bobcats pull off an overtime victory. Safe to say, Charlotte so far has been no slouch against the Heat.

The key matchups to watch on Saturday will be Chris Bosh -- who's scored 51 points in his last two games -- versus Al Jefferson. As we all know, Bosh is more of a perimeter threat, while Big Al likes to post-up in the paint. I'm curious to see how Jefferson defends against one of the hottest shooting big men in the league. Whoever wins that matchup will go a long way to deciding who pulls off this one.

Also with Michael Kidd-Gilchrist returning from his wrist injury, he goes up against James again. James scored 26 points on Kidd-Gilchrist, but 8 of them came at the line. Either way, we're going to need to see what Coach Clifford is hoping for with MKG becoming the defense's perimeter anchor.

One thing that Charlotte will have to try to control is James driving into the lane. He's nearly been unstoppable so far this season, with an insane statistical clip. In the circle, James is shooting 76.18%. Check out James' shot chart below: 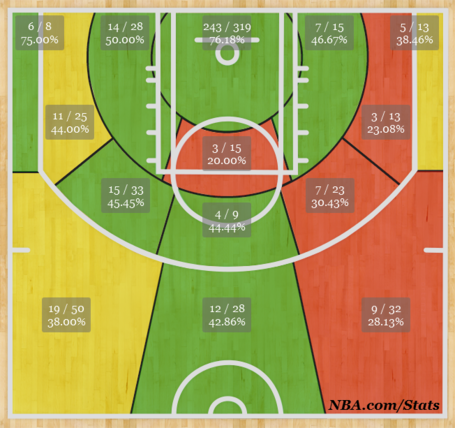 So, Charlotte, what's the plan to stop the near unstoppable?

Call me crazy (maybe insane), but I actually like the Bobcats' chances Saturday night.

After this game, the schedule doesn't get much easier. Outside of the trip to Madison Square Garden to face the New York Knicks -- who just beat Miami less than a week ago -- Charlotte plays the Toronto Raptors, Los Angeles Clippers, Chicago Bulls and then travel to Denver. The game tips at 7:30 p.m. EST Saturday, so make it down to Time Warner Cable Arena and see a possible first round playoff preview.