The Bobcats struggled in a loss to the Wizards tonight, mostly due to the great play of three Washington players, including center Marcin Gortat.

Share All sharing options for: Bobcats hammered 97-83 by Gortat, Wizards

The problem with a team that thrives in one specific area but heavily struggles with another is there will be games -- sometimes many of them -- when the strength isn't good enough to counteract the weakness. The 2013-14 Bobcats are one of those teams, with a well-rounded, team-oriented defense that's been one of the best in the NBA all year, and an anemic offense that can struggle against even the league's worst teams.

It should be noted that the defense didn't play one of their best games, but they played well enough, allowing only 28 points inside the paint, and preventing Washington's three-point shooters from making jumpers from behind the arc, forcing them to settle for long twos. The problem, of course, was that they seemed to hit these shots all night. At a certain point, especially without Michael Kidd-Gilchrist, a team will have to make certain sacrifices on defense, and this is one I'm ultimately okay with, even though it didn't always work to the Bobcats' advantage tonight. It's not as if they let Washington get easy opportunities or second chances, as the Bobcats allowed only eight offensive rebounds out of 45 missed shots, which is a below-average offensive rebounding rate for Washington. The one area where the Charlotte defense broke down was in transition, allowing 17 points off 13 turnovers, and even then, many of which were started by miscues in the offensive backcourt, which typically create an easier fast break for the opposition. One could still point to the 47.1 field goal percentage that Washington accrued tonight, which is a high number, but it's not much higher than the Wizards' 46.4 percent season average.

All things considered, the Bobcats defense wasn't the issue tonight, especially given that the offense certainly had the opportunity to make up the 14-point gap. Their 15-for-24 (a very bad 0.625 rate) mark from the free throw line did nothing but hurt the team, as did their propensity to turn the ball over or take an ill-advised shot. As I mentioned in my recap of Saturday's game against the Kings, the Bobcats ball movement finally had begun to look purposeful and effective for four whole quarters, but that improvement did not carry over into tonight's game. Oftentimes, the passing looked like it was being done for passing's sake, rather than trying to open up a jump shot or clear the lane for a drive.

Before I get into individual player grades, I want to highlight the performances of three Wizards players. Marcin Gortat was the key player in securing Washington's victory, preventing Bobcats players from scoring at the rim, and getting easy looks for himself at the opposite end, physically overpowering many of the Charlotte forwards he was matched against. Even though he does present some issues with spacing and shooting from range, John Wall again looked like a star-in-training, with 8 assists and 17 points. Bradley Beal was another standout, leading Washington in points with 21, and hitting most of the long twos that gave Charlotte so many issues for the whole game.

Josh McRoberts: As McRoberts' shooting regresses, the more he begins to look like an expendable member of this team. While he started the season on a hot streak, his flaws have recently become very apparent. He doesn't get rebounds (and as a power forward on a team that has struggles with rebounding, this is a big issue), he doesn't alter shots or play terribly strong defense, and he almost never gets to the free throw line, which compounds his scoring inefficiency quite a bit. Tonight he played 26 minutes, scored 2 points on 1-for-4 shooting, grabbed 3 rebounds, got one assist, and ... that's about it. It's time to find a replacement for McRoberts, even if it's within the team to give a young player like Bismack Biyombo or Cody Zeller starter's minutes. Grade: D+

Al Jefferson: Jefferson's really settled into his role lately, putting up his usual scoring numbers and even playing strong defense. Tonight, his defense was only occasionally useful, and his scoring didn't add much, dropping 6 points on a 3-for-9 line. That being said, I was very impressed with Jefferson's passing eye tonight, making great passes on two possessions in the second quarter that suggested his court vision is as strong as any in the league, save for perhaps your LeBrons and CP3s. It wasn't nearly enough to make up for his deficits in the more important areas, but it was notable enough to worth mentioning and could very well be something to look to in the future. Grade: C-

Kemba Walker: In addition to the Bobcats, I'm also a huge UConn basketball fan, so I've followed Kemba's career heavily for six years now, and there's one thing that has not changed about his game: when his teammates struggle with shooting, he will try to do too much. What that means here is that I'm not worried too much about his 7-for-17 shooting line, especially because he still scored 19 points and got 8 assists. What was worrisome is his five turnovers, as he created a lot of the turnover issues himself (though Ramon Sessions didn't help him on that front whatsoever). Relative to his teammates, Walker played well tonight, though that's not the most glimmering of praises. Grade: B

Chris Douglas-Roberts: Well, one thing's clear; if CDR keeps hitting threes like he did tonight, there is clearly a role for him on this team even when Kidd-Gilchrist and Jeff Taylor return from injury. Of course, he was only 2-for-3 tonight, so we shouldn't get ahead of ourselves. He's been a solid addition to the team, with some defensive versatility, and he's shot very efficiently since joining the Bobcats. The biggest knock on him so far has been his inability to rebound, but he earned 6 boards in his 30 minutes tonight, which was nice to see. He probably won't ever contribute that much, but when he does add something, he's a damn solid role player. Grade: B-

Gerald Henderson: 27 points on 10-for-19 shooting. Seven rebounds. Didn't add to the turnover issues all that much. There's not a whole lot more I could've asked from Gerald Henderson tonight. Grade: A

Anthony Tolliver: Eight points on five shots and five rebounds in 21 minutes. Tolliver's game usually fluctuates in between "quietly effective" and "added nothing," and tonight was more of the former than the latter. It's not enough to make much of a difference in the final score, really, but I have a hard time faulting him for that, and I'd instead take it up with the basketball deity responsible for injuring Kidd-Gilchrist and Taylor. Grade: B-

Cody Zeller: CODY. YOU ARE SEVEN FEET TALL. YOUR SHOT CHART SHOULD NOT LOOK LIKE THIS: 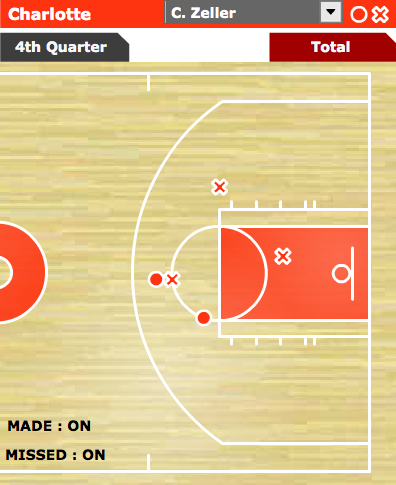 Bismack Biyombo: It was another quiet 13 minutes for Biyombo, who doesn't exactly struggle, but doesn't seem to have a definite role within Steve Clifford's system. No points (which is fine, since he only took one shot), three rebounds, and a block in his time on the court; which isn't as empty as it looks in the box score. Biyombo's still continuing to play quietly good defense, part of the reason why the bench units can be so successful when the Bobcats are playing well. Grade: B-

Ramon Sessions: The good news is that Sessions took all of his eight shots from close to the rim, and finished with ten pretty easy points. The bad news is that he ended up with more turnovers than assists. I'll take the points, but he needs to work on those turnover issues. Although he's normally pretty good with the ball, so I'll consider this an anomaly for now. Grade: B-