After publicly stating the need for another big man, Coach Steve Clifford now has Jason Maxiell at training camp. Can another undersized PF/C contribute like Jeff Adrien did last year?

Share All sharing options for: The Hornets signed Jason Maxiell!?

Seemingly out of nowhere, the Charlotte Hornets announced the signing of 31-year-old free agent "big" man Jason Maxiell. It wasn't too long ago that Maxiell was an important part of a very good Detroit Pistons team. Two years after the Pistons won an NBA championship without a superstar — which I consider a modern NBA miracle — the team drafted Jason Maxiell with the 26th pick in the 2005 draft. He played out his rookie contract in Detroit and then signed a four year extension for $20 million. When that contract expired last summer, Maxiell was signed to a two-year free agent contract by the Orlando Magic. The second year was a team option, which the Magic declined this summer, making Maxiell a free agent. 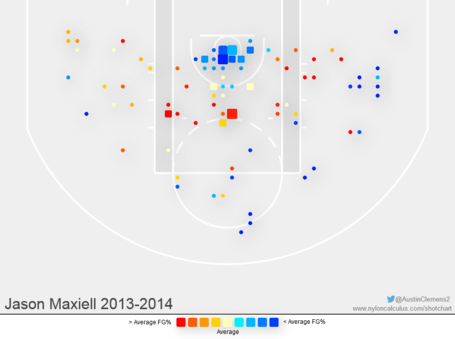 After four years at the University of Cincinnati and prior to the NBA draft, Jason Maxiell measured 6' 6.25" in shoes, weighed in at 258 pounds and registered a 7'3.25" wing-span (per DraftExpress).  Great size for a collegiate center, but small for NBA standards. On the court, Maxiell is best near the basket.  He lacks any sort of off the dribble game and in the NBA has struggled from mid-range and the free-throw line.  Despite utilizing lower body strength and long arms to unleash a decent post game, he's no Professor Al Jefferson on the block.  Considering his lack of production from mid-range, it is somewhat alarming that for his career he has taken 40 percent of his shots from greater than 16 feet from the basket.  This is especially concerning because in his younger years Maxiell was an explosive dunker and finisher.

In his prime, Maxiell was a high energy player that excelled defensively and on the glass. In arguably his best year, which saw him play all 82 games for the Detroit Pistons, he averaged 7.9 points, 5.3 rebounds, and 1.1 blocks while playing just 21 minutes per game. That year, the Pistons lost to the Boston Celtics in the Eastern Conference Finals.  Coming off the bench in all but seven of his games, Maxiell was a low usage player but posted a 16.7 PER (a player efficiency statistic where 15 is league average) and 6.3 Win Shares (an aggregate measure of a player's statistics and efficiency). In what might be his best NBA season, Maxiell shot above his career average from the free throw line (63 percent versus 56 percent) and limited his mid-range attempts to 15 percent of his total shots (compared to 40 percent for his career). These two factors likely improved Maxiell's effectiveness considerably.

Last year Maxiell played for the Orlando Magic, a young re-building team with interesting talent in the frontcourt (Tobias Harris, Andrew Nicholson, Kyle O'Quinn, and Nikola Vucevic). Having formerly helped pave the way for Greg Monroe and Andre Drummond in Detroit, Orlando was bringing in Maxiell to help mentor the young players.

Maxiell felt he helped youngsters such as C Andre Drummond and PF Greg Monroe learn the NBA game last season — his eighth and final season with the Pistons.

"Andre, Greg ... you help teach them about the league," Maxiell said. "It's a good feeling."

Maxiell said he still receives occasional text messages from them, along with PG Chauncey Billups, assistant coach Rasheed Wallace and others in the organization.

From Brian Schmitz's article in the Orlando Sentinel.

Other than providing a veteran presence in the locker room, Maxiell wasn't called upon to bring much to the court last year. After starting the first ten games of the season due to an injury to Glen Davis, Maxiell only saw action in 14 other games, the majority off the bench. On tape, he doesn't look as explosive or as tenacious as he did when he was throwing down dunks for the Pistons, and his numbers in only 488 minutes last year were some of the worst of his career (48 percent from the line, only 6.3 rebounds per 36 minutes, and only 44.8 percent from the field).

The Next Jeff Adrien?

Fans of last year's Charlotte Bobcats team likely remember Jeff Adrien, an undersized center with a long wingspan known for his high energy play. Sound familiar? At age 27 and in his athletic prime, Jeff Adrien was a monster on the offensive glass and played a hand full of games as Al Jefferson's back-up (much to the horror of Bismack Biyombo fans everywhere). Standing at 6'6.5" weighing 236 pounds and registering a 7'2" wingspan, his measurements are freakishly similar to Maxiell's. Take a look at Maxiell's stats from his great year with the Pistons mentioned above and Jeff Adrien's from his 25 games with Charlotte below:

Now the question becomes, can Maxiell replicate his peak production at age 31? Was his relatively poor performance in Orlando due to loss of athleticism or due to his reduced role on a non-contending team? These are questions that are above my pay-grade, but it is evident that Steve Clifford is excited to have Jason Maxiell aboard:

"He has natural physicality. Ball is in the air & he is looking to hit somebody." @hornets Clifford on Jason Maxiell. #HornetsMediaDay

It was less than a year ago that Coach Clifford sat a healthy Bismack Biyombo in favor of the more offensively gifted, yet undersized, Jeff Adrien. Without knowing if Maxiell can reach his Adrien-like heights of 2008, it seems crazy to predict him to take minutes away from Biyombo. However, considering Adrien's role on the team last year, the Maxiell signing may turn out to be more than a camp invite. Vote below on if you think Maxiell makes the team.