Jeff Taylor's role on the Hornets was a question mark even before his arrest for domestic violence. Assuming he is reinstated by the team this season, he will have to fight for his minutes.

Jeff Taylor's NBA career is now entering its third season, and any time he might have seen on the court in 2014-15 might have already been limited by his play. Following his recent arrest for domestic violence charges, though, there's a real chance he doesn't see more than a dozen games' worth of playing time with the Hornets this year. Now blocked on the depth chart by a group of wings that includes *deep breath* Lance Stephenson, Gerald Henderson, Michael Kidd-Gilchrist, Gary Neal, and PJ Hairston (and possibly even Marvin Williams, if Steve Clifford wishes to use a big lineup), all of whom either offer better skills right now or greater potential, Taylor would need to work his way back onto the court in more ways than one.

Now, it's important to get that out of the way early, so we all know exactly what the stakes are for Taylor this year. With that being said, his on-court abilities might or might not prove useful this year. Drafted out of Vanderbilt as a 3-and-d player, Taylor has underwhelmed in both facets thus far in his professional career. Through a 1500-minute rookie campaign and an injury-shortened 2013-14, he's shot only .321 from beyond the arc, including a .269 mark in his 26 games last season. In his career, he's taken over one-third of his shots from long range, although he seemed to improve this last year, passing up some extra threes for more shots at the rim, but also a few more long twos. While he's been solid near the rim, he has truly struggled to hit any other shots from inside. Long twos made up nearly 20% of his total field goal attempts in 2013-14 (a rate that isn't necessarily that bad for a wing shooter, but that would easily make up a big part of this game), and he only converted those shots at a .220 clip. This is, to be clear, terrible. You might remember that one of the criticisms of Cody Zeller last year was that he took, and missed, far too many long twos. Taylor's field goal percentage from the same range was fifty points lower than Zeller's. According to his NBA.com stats profile, Taylor shot only .215 on jumpers. 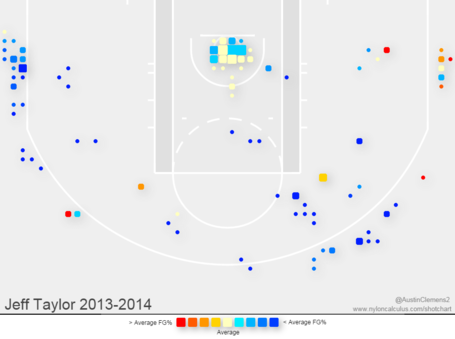 This isn't to say that Taylor isn't without his merits offensively, just that he hasn't succeeded in the areas he was expected to. Last season, Taylor was one of the best on the team in terms of getting to the rim from the perimeter, and although his .60 field goal percentage at the rim is only just about average, his high shot rate in the area helped raise his percentages beyond what you might think it would be, given his lack of success at range shooting. Unfortunately, though, this didn't result in a ton of extra free throws for him, his free throw rate being 10th on the team of the 16 members who played in more than two games (sorry, James Southerland). And with missing as frequently as he did, you would expect him to shoot a bit less, but the ball didn't do much but be shot when it was in his hands; while his Usage Rating ranked only ninth on the team, he shot more often than Josh McRoberts, Anthony Tolliver, and Chris Douglas-Roberts, all of whom you might recognize as effective shooters last season. As such, Taylor's True Shooting Percentage and Effective Field Goal Percentage bested only the marks of Ben Gordon.

Defensively, he's still somewhat of a liability. He rarely gets steals (1.1 Steal Percentage, 13th on the team) or blocks shots (0.6 Block Percentage, also 13th on the team), and finished with the lowest defensive rebounding percentage on the squad, just slightly below Luke Ridnour's mark. His Defensive Rating has finished well toward the bottom of the team list in both of his seasons so far. According to 82games.com, Taylor's net on/off points finished at a -132, and that's in a season shortened to only two months. While he has occasionally shown an ability to slow down his man defensively, this hasn't resulted in the other team scoring fewer points, and there are many different facets of a complete defensive game that he needs a lot of work on.

So what can we expect from him this season (assuming he plays enough to make a difference)? The best case scenario for right now, I'd say, is that his time off with the injury allowed him to work on a more consistent jump shot, being able to hit shots from more areas on the floor, and his recent weight loss made him a little quicker, helping him out on perimeter defense. If Taylor can be the 3-and-d player that he was projected to be, he'd be an asset to this team, even if he still sits on the back end of the bench. Worst case scenario? He didn't get any better, and an untimely injury to another perimeter player or two forces Taylor to take a much bigger role than expected. While I don't think Jeff Taylor is a team-killer in the vein of some former Bobcats players who will remain nameless, unless he's made noticeable improvement in a specific area, I'm not sure why he should see that much playing time on a team that has their best preseason playoff odds in franchise history.