Who could the Bobcats target before the trade deadlines, and what could those potential trades look like?

The biggest name I've heard linked to the Bobcats in trade rumors is Greg Monroe of the Detroit Pistons, so we'll start there. I worked on this article with Chris Barnewall, who came up with the framework for what could be two potential trades with the Pistons, should Rich Cho and company decide to make a deal with Detroit. 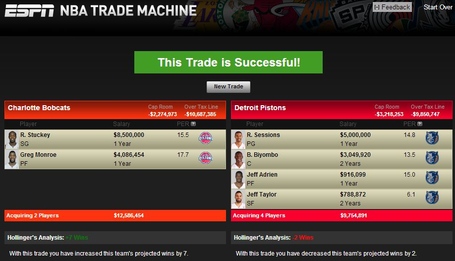 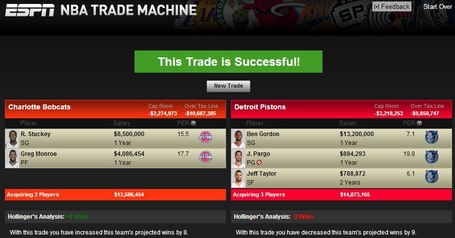 Of the two potential trades with the Pistons here, I think the one that involves the Bobcats trading away Ramon Sessions and Bismack Biyombo for Greg Monroe and Rodney Stuckey is the more likely of the two to become actualized. It would probably hurt the Bobcats more, but I'd imagine the latter would require a draft pick, given how favorable it is to Charlotte. Even if Jeff Adrien is removed from the picture, losing Biyombo would be a huge blow for the defense of the bench unit, which relies upon him in a rim-protector role. Instead of Biyombo, that role would have to be shifted to Cody Zeller, who doesn't yet have the physicality to play as a low-post defensive center, or Josh McRoberts, who doesn't exactly seem suited for the role, though I think he'd be better right now than Zeller. I actually see Stuckey and Sessions as being roughly comparable in terms of skill set, but Stuckey doesn't have nearly the passing eye of Sessions, which would really hurt the ball movement, especially given that the backup point guard has been given primary ball-handling duties, which Stuckey seems ill-fit for.

On the other hand, Monroe would be a very good addition to a team that has made a good post defender out of Al Jefferson, and he would provide another offensive threat in the paint. The Bobcats rank 27th in the league in shooting percentage from inside the arc, and adding a second big man with proven scoring ability would not only be a huge improvement to their efficiency, but would probably open up more room for perimeter scorers. Stuckey would be a productive addition too, as his offensive efficiency has improved a lot this season with an added emphasis on taking inside shots. The trade would probably help the Bobcats much more than it would hurt them, even with the risk of losing the considerable defensive play of Biyombo.

I was happy when I heard the Bobcats were linked to Monroe, because I do think that the Bobcats could use some help in their frontcourt. I wasn't as happy with the rumors linking them to Brandon Bass, but I think he could be a solid contributor to the team. Here's a possible trade that I could see happening:

It's not ideal, but a trade that gets Bass to the Bobcats would probably require this foundation. With very few Celtics guards available for a trade, Rich Cho and company would probably have to get creative to fill a potential Sessions void on the bench. What do you think?

Chris: I feel like this trade would hurt the Bobcats more than help them. While Bass would provide a scoring punch off the bench, his defense is lazy and atrocious at times. Even Bass's scoring is inconsistent and not always helpful. Trading away your backup point guard in a deal that's going to thin out your already weak backcourt doesn't seem like something the Bobcats would want to do.

Looking at the Celtics and Bobcats roster, I don't see a trade happening between the two unless a 3rd team gets involved, but even then. The only player the Bobcats really would want is Bass or Jeff Green to help out that 4 spot. I doubt the Bobcats would want to trade a 1st round pick for either of those players, so the question is, who on the Bobcats do the Celtics want. Do you see anybody? Cause I don't.

Tucker: No, I have a hard time figuring out what the Celtics would want in return, so let's move on to another player that I've heard linked with the Bobcats in rumors: Evan Turner of the Philadelphia 76ers. I can't imagine the Sixers, with mostly young assets and a lot of potential cap space, would want anyone on a multi-year deal, and it would probably have to be more than a one-for-one, straight-up trade in order for them to give up Turner. In that case, this seems like the most likely possibility:

At this point, I'm not sure who the Bobcats are willing to give up in order to acquire the players that they've been rumored to have interest in. Do you think they'd be willing to part with Sessions?

Chris: I think they would absolutely be willing to part with Sessions. I know that the team said they're trying to take the next step forward, exit rebuilding mode, and move on to winning games and competing but that doesn't mean they plan to do it with this roster. Very few guys on the roster are "untouchable". I think the only players that have absolutely no chance of being traded are Kemba Walker and Al Jefferson. I also highly doubt that Michael Kidd-Gilchrist gets traded, but I don't think he's completely untouchable. Besides those guys? Nobody is nailed down to the floor, everyone is available for the right price.

As far as your trade suggestion goes, I can't see the Bobcats trading Anthony Tolliver, who is having career high shooting numbers, so they can take back a player that isn't great at shooting. Also, the one-year contract swaps don't really make sense, because everybody can just wait for the contracts to expire.

Again, we're in a situation where neither team wants to take and give what the other wants and I'm not sure we're gonna find a happy medium. Sam Hinkie wants a draft pick, and the Bobcats, if the season finished today, would have two draft picks. The way the season is going, however, they could very likely only have one draft pick, so I have high doubts in the Bobcats willingness to trade one of their two picks. Looks like we're once again stuck with a dead trade.

Tucker: I agree with most of that; the one point where I might quibble is on Tolliver, as the front office might be in "sell high" mode on him- which, of course, is purely speculative on my part. Besides the players mentioned in our trade proposals, what type(s) of player would you most like to see the Bobcats make a deal for?

Chris: You're right about the Tolliver sell high mode, but I don't think they're gonna sell him high for a player that can't shoot, based on the direction they're taking the team. They want to win games and trading your best shooter, for someone who can't shoot, sends you in the opposite direction.

As far as more proposals go, I haven't seen any other rumors as of late and if we start looking for players the Bobcats could add to help them we'll be here all day long. We've talked about all the trades everybody has been rumored in, I personally think none of these trades will happen, and if a trade does happen, it will be a deadline out of nowhere trade.

Tucker: I'm beginning to think so too; the potential trades for the players rumored seem like they'd be tough to settle without Rich Cho working some magic. Although, he's done that before, so anything's possible. They could add help in the frontcourt, or a perimeter player, which I'm sure helps settle a lot of the confusion that some of you might be having in terms of trade targets. The only thing I'm fairly confident about saying is that if Sessions is moved- which I think is a possibility- the front office will not be content with Jannero Pargo as the permanent backup point guard for the rest of the season. Other than that, I think I'd put higher odds on the Bobcats missing out on acquiring the three players they've been most heavily linked to.