After a really rough start to the season, Zeller has had steady improvements, including a considerable jump post-All Star break.

There's an impatience with the NBA Draft that irks me.

You draft a rookie in the lottery so his immediate expectations are a little higher than the average draft pick. This is fair; You're comparing the player to their peers and the investment levied into getting them. You want them to be able to play immediately, that's why you drafted them so high. But sometimes, they can't play right off the bat. We've seen this with Anthony Bennett and Tristan Thompson up in Cleveland, and plenty of others in other cities and in other years. The draft pick doesn't go as smoothly as fans and analysts had hoped and expected. Two months into a player's young career and they're deemed a bust. That's ludicrous. How can anybody say if a player is going to make it in the NBA that quickly?

This brings me to Cody Zeller. Zeller, to put it bluntly, had an awful start to his rookie season. In November, Zeller shot 36 percent from the field, sported a True Shooting percentage of 43 percent (a shooting efficiency metric that incorporates value of free throw shooting), far below league average, and for the most part didn't look like he had any clue what he was supposed to do out on the floor.

As the months passed, things didn't really get any better. The Bobcats would give Zeller the ball at the top, just inside the three-point arc, and he would still have a deer in the headlights look. Confused what to do with the ball, he'd hold it and burn a few seconds off the shot clock before passing it off or throwing up a midrange jump shot, which he still hasn't shown he can consistently make.

Zeller's defense had similarly bad weaknesses. Though he has good lateral quickness to defend the pick and roll, he struggled to contest shots, and when he did, it resulted in fouls, sometimes ugly ones. A lot of this had to do with Zeller's lack of strength, which is to be expected from an NBA rookie. Bobcats coach Steve Clifford even commented on it to the Charlotte Observer back in January: "It's his hips, his core, his back. It takes some time," Clifford said. "People think by throwing [rookies] out there, they get better. I don't agree. I want a role that 1) he earns and 2) that he can play well in. If that's 16 minutes right now, then that's what he needs to be."

Although it's not to the extreme of Bennett in Cleveland, there has definitely been some murmuring that because of Zeller's inability to make basic basketball decisions on offense and a lack of defensive skills, that he may not be an NBA player and if he was it was an end of the bench player at best.

However, Zeller slowly started to show improvements. Though he still had moments where he looked lost and confused, they're becoming less frequent. In January, Zeller had a TS% of 47 percent in large part due to him no longer being so indecisive. He took the ball and he acted immediately.

Zeller followed up his improved January with an even better February, getting his True Shooting percentage above 50 percent for the first time all season. However, if we reduce the sample size a little to only games after the All-Star break, Zeller has a TS% of 55.9 percent and a base field goal percentage of 45.6 percent. His points per game since the all star break has taken a slight jump from 5 points to 8 points and more than ever he's looked like the NBA player everybody wanted him to be.

With this kind of jump we really have to ask ourselves what exactly Zeller is doing differently after the All-Star break. We'll have to remember the sample size is still relatively small as the Bobcats still have played a mere 11 games since the All-Star break. 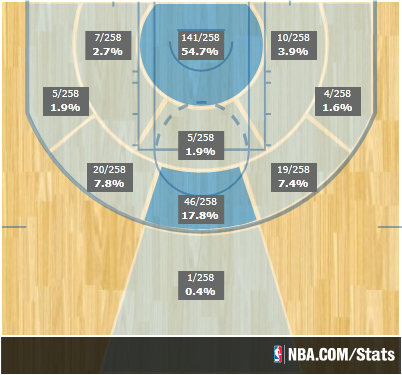 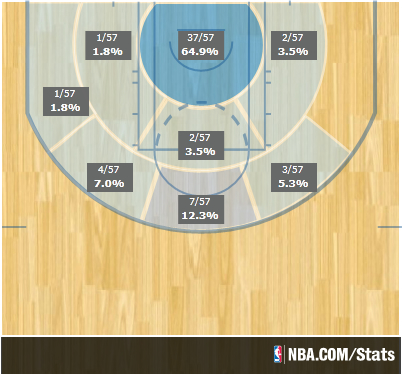 Besides the number of shots taken, the most obvious difference between the two charts is that Zeller is taking almost two-thirds of his shots from within 8 feet of the basket (the dark blue area on the second chart) compared to the first chart where it's a little more spread out.

We know getting closer to the basket has helped Zeller's improve because we've seen it in his post all star break numbers. One of the main reasons his True Shooting percentage had a jump as high as it did is because Zeller is getting closer to the basket and drawing more fouls. Zeller's free throws attempted per game have increased from 1.8 a game pre all star break to 3.4 a game post all star break. I think it's fair to say this is because of Zeller choosing to go towards the basket more, another benefit of having an offense that's creating more spacing than they did early in the season.

After a bumpy start for Zeller filled with doubts, it's cool that we're seeing him develop and already show improvements in his game. He's gone from the rookie who almost looks terrified to get the ball, to a player who makes decisions and acts on them. He's stopped settling for jump shots and he gets to the basket. The end of the season is in sight and if the numbers tell us anything, Zeller is ready to have a strong finish.