Breaking down Michael Kidd-Gilchrist's breakthrough offensive performance against the Heat

MKG led the Bobcats with 22 points in a surprising offensive performance from the young small forward. How did the Bobcats utilize him so well in spite of his clear weaknesses?

Share All sharing options for: Breaking down Michael Kidd-Gilchrist's breakthrough offensive performance against the Heat

Michael Kidd-Gilchrist turned in his best scoring effort of the season Wednesday night in their close loss in Game 2 of their first-round series against the Miami Heat. Surprisingly, Kidd-Gilchrist led the Bobcats with an efficient 22 points on 13 shots, scoring his most points since December of 2012. Few, if any, people thought Kidd-Gilchrist would pull out such a performance considering his notorious offensive weaknesses, especially against LeBron James and the Heat's defense.

Understanding how he scored so well is imperative given the Bobcats' offensive woes, which are exacerbated by Al Jefferson's injury that not only impairs his offense, but the Bobcats' as well.

So what did we see? 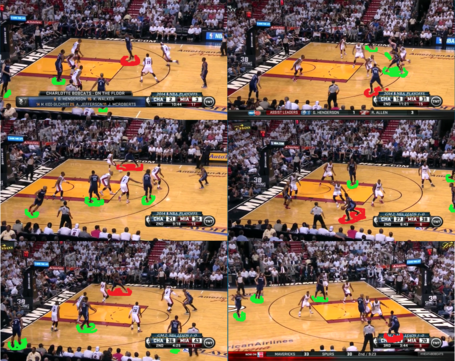 Fig. 1: Michael Kidd-Gilchrist (red) at the exact moment he first receives the ball in each play. The green dots note the location of the Bobcats players on the strong side of the floor.

Looking at the six selected plays of the ones I detailed above, the Bobcats found a lot of success on utilizing great ball movement to find Kidd-Gilchrist on the weak side of the floor, which maximizes his chances for success on offense. When given space to work with, Kidd-Gilchrist has the ability to use his ballhandling to create his own shot. By switching sides of the court from the strong to weak side quickly, the Bobcats took advantage of Miami's willingness to give him space with their focus on Al Jefferson.

They especially went to this look early in the game, which by no coincidence is when Al Jefferson's shooting is most effective. With Jefferson hobbled by his plantar fascia injury, it makes sense that the Bobcats would try to maximize the potential of Kidd-Gilchrist's offensive chances. You can still try to get Jefferson looks at the basket, but you can also swing the ball around and find MKG to get to the rim.

MKG's offensive skill set is limited by his jump shot, as we already know. But he's also pretty smart in knowing how to use his body to make space with the dribble or with his shot. Sometimes he's too confident and gets his layups blocked, but as his performance indicates, he still can show an exceptional understanding of it. Time and time again MKG found space at the rim to get his shots up even when it seemed there was none.

His weaknesses are visible to anyone who pays a lick of attention, but Kidd-Gilchrist played well within his limitations. He attempted only one midrange jump shot, and he made it. I'm not sure how often you can count on Kidd-Gilchrist to take 13 shots and have nearly all of them come at the rim, however. He's a decent ballhandler and has the strength to move into the paint, but he can be forced into turnovers on the dribble and his shots at the rim against multiple defenders sometimes feel a bit overconfident.

Still, Kidd-Gilchrist's confidence in his offense and the Bobcats' trust in it was a very interesting thing to watch in Game 2. Hopefully Al Jefferson's foot feels better as he gets more rest between games, but regardless this game is a hopeful indication that the Bobcats can find some offense out of Kidd-Gilchrist, which many might consider "found money" in a series like this. We might not see it happen as well again in this series, but it certainly was encouraging to see it so effective.

[Research thanks to the wonderful MySynergySports.com]