Michael Kidd-Gilchrist is one of the more polarizing players on the Bobcats’ roster. Some judge his play more on where he was drafted than how he helps the team. And while some see the difference he makes on the floor, it may not show up on the stat sheet.

Michael Kidd-Gilchrist had a sophomore NBA season. Some will claim it was horrible. Few will say it was a roaring success. But none can argue that it didn't happen. Kidd-Gilchrist was hurt against in Dallas in December, which knocked him out of 19 games. That probably didn't help his flow (didn't hurt his hustle though). It essentially delayed the start to his season which was a shame because he was playing his best offensive basketball in November, shooting 51 percent from the floor while playing almost 30 minutes a night. He never got back to even 25 minutes per game of play during any month the rest of the season and it took him until March to have a positive plus/minus, if that stat's your thing.

But Kidd-Gilchrist was a big piece of this team's success because he's such an effective defender. He's not perfect, if you watch enough he will have lapses, isn't yet a 100% lockdown one-on-one defender and he did make some noise by giving up 62 and 61 points to Carmelo Anthony and LeBron James, respectively. (The nerve to give up points to one of the best scorers on the planet and the best basketball player in the world. Pfft, ridiculous.)

Aside from those lowlights MKG was a big reason the Bobcats were a top-10 defensive team after not having an NBA level defense last year. Of course credit is due to one and all, as well as Steve Clifford and his staff but they used Kidd-Gilchrist to help everyone. Making him the lone wing player allowed to crash the boards, for instance, and putting him out on an island when need be against the LeBrons, Carmelos and Paul George's of the league. And he did put in some pretty good work on George.

With any young player there are positive and negatives. And then there's that jumper. Let's cover these as such: The good. The bad. And the ugly.

The Good: His defense is of course the reason Kidd-Gilchrist brings the value he does. It's easy for a lot of observers to watch the Bobcats, not see Kidd-Gilchrist on the floor, look at his stats and label him a bust. I get it. I really do. But I wholeheartedly disagree with anyone calling this second year player a bust. His value to the team in defense is too great, and he means as much to this team as anyone in the league, especially to start the game. The Bobcats were the fifth best team in the NBA in net rating in the first quarter of games this year. MKG usually plays more of his minutes in the first and third.

Is that all MKG? Of course not. Steve Clifford preaches getting off to a good start and quite frankly there are teams that start well and don't finish (Minnesota) as well as the best teams who start the best (San Antonio) and finish the best. Opponents have an offensive rating of 105.3 when he's off the court compared to 102.4 when he's on. Tony Allen, the player Kidd-Gilchrist is most likened to, has a similar effect on his Memphis team holding teams to 103.2 rating when he's playing but 105.4 when he's not. Kidd-Gilchrist still plays the fifth most minutes on the team averaging about 24 minutes a night. But in the fourth quarter he slips all the way down to 11th on the team in average minutes.

And when breaking it down to the individual pieces, Kidd-Gilchrist holds his opponent counterpart to below league average production consistently with an average opponent PER of 11.1 for opponents, and well below league-average effective field goal percentage (50.1 percent) at 46.6 percent. (via 82games.com)

In 62 games played this season, MKG fouled 49 times in the first quarter. Only Cody Zeller had more first quarter fouls with 55 but played in 19 more games. Kidd-Gilchrist's ability to play defense without fouling, another Clifford preaching point, must improve so that he can stay on the floor next year. He should get a little more respect from the officials moving forward as well. It's a vicious cycle where he gets two early fouls, can't really get in rhythm, the game stays pretty close or is a blowout, and then he's not needed or can't be used down the stretch because of his limitations. Not ideal.

But Game 2 in the playoffs was a good example of what some sustained playing time, a little success and some confidence can do for this young man. He scored 22 points and grabbed 10 rebounds in 34 minutes of the play going 9-for-13 from the field. He was aggressive and decisive, and he stayed on the floor. He was Charlotte's third guy, which is something this team desperately needs to help Al Jefferson and Kemba Walker.

The Bad: Michael Kidd-Gilchrist did not have the second year jump you really want to see from a young player in the NBA. Let's get that out of the way. He played in last year's summer league to get some extra court time, which was a great idea. And he was sure to be more confident and comfortable on the floor this year with his rookie season under his belt. But if you look at his stats (and you know you will or have already) you will see a dip in offensive production. A DIP! He averaged about seven points and five rebounds this year as opposed to nine and five last year. Ehhh. Certainly not a trend you want to see continue but nothing to get overly concerned about. Not yet. Again, had his injury not sidelined him he was in line to at least equal his rookie numbers.

No, the real cause for concern isn't about Kidd-Gilchrist's scoring. Listen, it's not his strong suit. And it probably won't ever be his strength. But he wasn't drafted for his jumper (thankfully), nor for his ability to put the ball in the basket via other avenues. In fact, 57 percent of his drives were converted for field goals, and that's a good thing. Those are guard-like numbers and only Gerald Henderson had more field goals attributed to drives on the Bobcats. But MKG is only driving the ball to the basket about twice a night, so those numbers need to improve. But he knows the jumper is not what he needs to do because 70 percent of his shots came from within eight feet of the basket.

Kidd-Gilchrist is aware of his offensive limitations and plays accordingly. He just needs to add a few more points and rebounds (easier said than done I know) per game and I think that can come with more minutes on the floor. His offense often has to come from weak-side plays, and the Bobcats need to get more consistent production from Kidd-Gilchrist on these to be more successful offensively

Knowing all we do about his offensive deficiencies, this shot distribution chart should be one of the most encouraging things about Kidd-Gilchrist. I love it. He knows he can't shoot so he doesn't, really. He took 70 percent of his shots from inside eight feet. 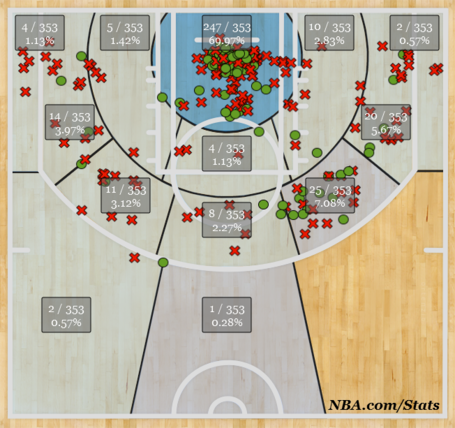 The Ugly: But we all know his jumper, and his scoring as a whole, has to improve. For him to be on the floor at the end of games he can't be someone the other team can simply ignore on defense. He has to at least be threat and right now, if he's not grabbing a rebound and taking it full court or slashing to the basket, he just isn't. This summer will be all about working with assistant coach Mark Price to get that funky junky jumper under control, even a little bit. The summer is the time you get better and hopefully the Bobcats have a strict plan in place for him to shoot a billion jump shots a day.

Realistically though, we probably won't see Kidd-Gilchrist knocking down a ton of outside shots next year. Although he certainly appeared much more comfortable in the last three games of the playoffs against the Miami Heat, maybe because he made every single two point shot he took (three) outside eight feet. But it has to get better. Good news is it can't get much worse.

He may never be the type of player that will be able to take over a game offensively. And certainly seeing the skill level of Bradley Beal, someone the Bobcats could have taken instead of Kidd-Gilchrist, is enough to have some fans upset at yet another missed draft opportunity. But both players are only 20 years old. And Kidd-Gilchrist still has a lot of room to grow. You just hope the Bobcats can nurture that the right way, and give him enough of a chance to succeed. It was to the point in the playoffs where maybe it made sense to just play him through the fouls. If he fouled out, so be it. But he certainly prospered when he was able to find some rhythm and find those lanes.

The good news is it just takes work. Lots and lots and lots of work. But Kidd-Gilchrist doesn't seem one to shy away from a hard day's work and Bobcat fans can count on him putting the effort in.

Grade: C+ sounds bad, I know. But think of this as a Zach Morris C+ and not a Jessie Spano C+. We know Michael Kidd-Gilchrist has more in him, and his potential is almost untapped. So it's not like he can't get into Stansbury. But it's tough to grade this season any higher than just above average because the impactful improvement was just not there on a nightly basis, especially in crunch time. For all the reason we've discussed, his value is undeniable and considering the injury and the bumpy start it was great to see him finally excel against the best in the word this spring. So don't be discouraged, we know there is a 1502 SAT score in there somewhere.

Lastly I can't really discuss Kidd-Gilchrist's season without referring to the dunk on Meyers Leonard.