At The Hive 9th Pick Tournament, Round One: (1) Trade Out for Veteran vs. (8) Adreian Payne

In the first matchup of the ATH 9th Pick Tournament, trading the pick for a veteran and Michigan State big man, Adreian Payne, square-off. Who will win this matchup? Vote, and let your voice be heard in the comments section.

Share All sharing options for: At The Hive 9th Pick Tournament, Round One: (1) Trade Out for Veteran vs. (8) Adreian Payne

This matchup is one of pure opposites. Option one: the top seed in the tournament, trading out of the draft for a proven veteran to help the team advance even more into win-now mode, or option 2: the underdog, Michigan State's PF/C, Adreian Payne.

Before we get started, here's how it works. I've done this over on SB Nation's Indiana Pacers blog, Indy Cornrows, the last two seasons. It was a major success, but I plan on doing things a little more different, and fun, for the readers. I will be debating each matchup with James Plowright of TheLotteryMafia.com, while also adding-in videos into it.

Without further ado, here's our conversation about trading the No. 9 pick for a veteran and Payne. Enjoy!

Evan: I'll start it off with this, would it be a good idea to trade the pick for a vet in a loaded draft?

James: It obviously depends on the deal. The value of the No. 9 pick is reliant on who is there.

Say Aaron Gordon, Marcus Smart or any of the other guys who appear to be going in the top 8 were to slide and be available, it would most likely increase the value of the 9th pick.

Looking at it from the other side of things, it all depends what vet the Hornets get back. How long his contract is and how much he limits Charlotte in future free agencies in the next few years.

Another aspect to take into account is the feeling within the front office.

With the Hornets re-launch and the fan base buzzing (put intended) off the most successful year in franchise history, they may want to carry this momentum and win now. With Big Al signed for just another two years, there might be some self-imposed pressure to create a team in that time, which can be more than just a 7th or 8th seed in the East.

With the Hornets leading the league in season ticket sales for next year, as well as keeping 90 percent of their current season ticket holders, it looks to be a perfect time to sacrifice the ninth pick for a veteran who can come in and contribute straight away.

Saying all that, I think it may be a better idea to keep the pick (obviously depending on the offer) as with any rookie you are almost guaranteed to have them locked up for at least three years at a very cap friendly rate and have the chance to extend them.

So, overall, I think the "loaded draft" statement is pretty irrelevant as the Hornets will simply be looking for a little more value than in years with less talent.

How do you think the front office will approach the draft? Would Payne, being a 23-year-old senior be able to contribute straight away like a veteran? I'm not so sure.

Evan: If they did deal the pick, how would, lets say, Arron Afflalo fit the Hornets' plans to win now?

James: He would fit perfectly and tick every box there is. Until Carmelo Anthony was traded in Denver, Afflalo was simply a defensive stopper in the mold of Raja Bell and Bruce Bowen. However, once Afflalo was given his chance to lead and take the reigns he showed he was able to lead a team, without becoming too dominant.

Afflalo was even quoted to say, "You can be a dominant player who has dominant games and dominant moments, without dominating the entire gym."

That would appear to fit right into the Charlotte locker room, which by all accounts was the one of the best in the NBA last season.

So, he plays defense and is a high character guy, that seems like a good start; but what does his offensive game have left? Have a look at his shot chart below and you can see he is one of the most efficient scorers in the league. In fact, back in 2012, he had the best true-shooting percentage of any two-guard in the league.

He is pretty much the perfect fit, but the question is how much is he going to cost? 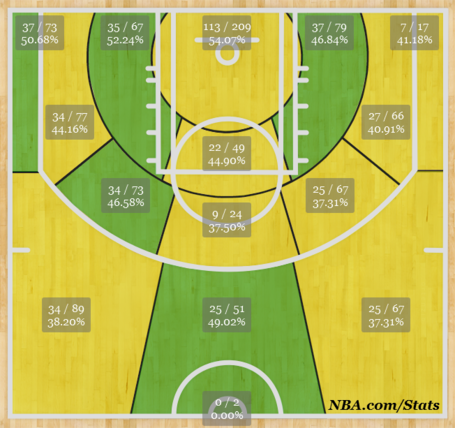 Evan: For the cost of Afflalo, I think Orlando would have to pounce on just the No. 9 pick and maybe throw in Gerald Henderson (assume he wouldn't want to ride a bench role).

Also, I have to think trading the pick for Afflalo is less of a gamble than this year's crop of guards.

James: It is certainly a less of a gamble, but it is a typical type of deal which sacrifices longevity for winning now.

I was actually speaking with Phillip Rossman Reich of Orlando Magic Daily and he said that this was the most obvious deal but would figure the Hornets wouldn't want to give up Henderson and the 9th pick for just Afflalo. He said that if someone the Magic really like falls to No. 9, then the Magic may accept the pick and a future second rounder for Afflalo. So it may depend who is on the board.

Overall, I think that deal is okay, but personally I really like the wings in this draft which will be available at No. 9. Nik Stauskas and Garry Harris have the potential to eventually be as good as Afflalo.

Would it be possible to get Afflalo and get a lottery pick? Maybe something such as Zeller/Neal (expiring) / No. 9 for Afflalo and No. 12 would be intriguing for both sides? With that 12th pick, they could take Adreian Payne, who arguable fits better next to Al Jefferson than Cody Zeller does?

Evan: Definitely agree, I feel Zach LaVine has sky-high potential as a combo-guard, too.

Great segway into Payne, by the way.

How do you think he fits in Charlotte, even at No. 9? I feel his versatility to stretch the floor is a major asset and fits perfectly alongside Jefferson.

Also, I feel Payne's versatility fits well in the new NBA of sorts with bigs starting to work outside-in, instead of inside-out.

James: It is probably best we don't get into LaVine, he is my most overrated player in the draft. I am really not high on him.

I have been high on Payne since I saw him in his first two games this year at Michigan State against McNeese State and Kentucky.

At one time it looked as though he may be available for Charlotte to take with the Portland pick, but I can't say I am surprised that his draft stock has increased. Charlotte fans talk about trading back and taking Payne later back in the draft, but I think that would be too risky. If we like him that much we would be willing to trade back and get him, we should just take him at No. 9.

Payne looks to have the size (6'10") length (7'4" wingspan) and strong upper body (239 pounds, with just 7.6% body fat) to play both the four and the five at the next level. He would automatically replace Biyombo in the rotation in my opinion. Payne could even play in some of the same sets that are run for Al, due to his decent post game. (He scored 1.1 points per 100 possessions this year at Michigan State.)

In terms of his skill set, he also fits right in with Clifford's philosophy and ticks a lot of the boxes for Cho's summer shopping list.

Payne shot 42 percent from deep last year. This skill, in particular, makes him stand out from others with his mixture of size and length, despite having a relatively mechanical stroke he has proven to be very reliable. This has also translated to the free throw line where he shot 79 percent from the line and hit 17-17 against Delaware.

His length on defense is helped by his athleticism, which is above average for someone of his size.

Doesn't it seem I have been listing his strengths for ages? Well yeah, that's how I feel about him. He is one of my favorite players in the draft.

Would you see Payne as a "safe" pick at No. 9? Do you think fans would be disappointed if we didn't take one of the bigger name players that might be available?

Evan: Personally, I'm also high on Payne. Like you said, he fits the system to a T. So, if one of the "top names" in this draft falls to 9, then nobody should be disappointed if he's selected here.

I love his versatility; he could play a Chris Bosh-like role from the outside-in and create some mismatches.

Payne has probably seen his potential peak at the age of 23, but I see him as one of the safest picks in the entire draft class.

James: I really think a trade for Afflalo or drafting Payne would be a win/win for Charlotte. I would be excited for both.

If I was forced to choose, I would probably go with Afflalo, just because he would be able to have more of an immediate impact and would bring another competitive, high character guy into the locker room.

I also think Clifford likes to have his power forward handling the ball at the top of the key, making plays for others. That's what we saw a lot of from Cody Zeller and Josh McRoberts this year.

For all Payne's strengths, he isn't blessed with great passing ability and he maybe somewhat limited with ball movement on offense, which we know, is so very important for this team to have success.

Afflalo, on the other hand, has hit that stage in his career where he has had to embrace playmaking for others and is now an above-average passer for his position.

Evan: I feel either one would be a great pick for the Hornets, even in a tournament matchup of a No. 1 vs. a No. 8 seed.

With that being said, what do you think Charlotte should do, readers? Vote in the poll and let James and I know in the comments section below your thoughts on our discussion today!

Also, for everyone that loves the Draft Express video scouting reports/breakdowns done by DX's own Mike Schmitz (who doesn't?), I have added them in below.

Again, read our conversation and watch the Draft Express video breakdown of Payne. Then, once we're done with that, let your voice be heard in the comments section below on who should move on to the second round!