Kicking off At the Hive's player previews for the 2014 season, we break down Jannero Pargo, the team’s third-string point guard.

As this is my first post for At the Hive, I thought I’d give a brief introduction. I grew up rocking Charlotte Hornets Starter jackets in Virginia before I knew much about basketball. Having loved Mugsy and Grandmama as a kid, I had the chance to follow the team more closely when I moved to the Charlotte area about seven years ago. Since then, I’ve been a die-hard Horncats fan. I’m really excited to be contributing here and I hope that shows through in my writing. And now to business…

At 34 years old, Jannero Pargo is a lot of thing to this year’s Hornets team. He’s the third point guard behind Kemba Walker and Brian Roberts; he’s the oldest player on the roster; he’s one of the team’s best 3-point shooters; and he’s totally fine never seeing the floor. Although players at the end of the bench might not seem important, every team needs good locker room guys and from all accounts, Pargo is one of those guys. In a recent interview, Kemba Walker called Pargo his mentor on the team. It’s hard to quantify leadership, professionalism, and locker room personality, but it seems safe to assume that even if Jannero hadn't played a minute last year, he would have had a positive effect on the team. But like almost all NBA players, they eventually have to step on the court and play, and, lucky for Charlotte, Pargo came to play when given the opportunity. Let’s take a look at how he did as Charlotte's third point guard last season in order to get a good idea of what to expect for his contributions in the upcoming year. 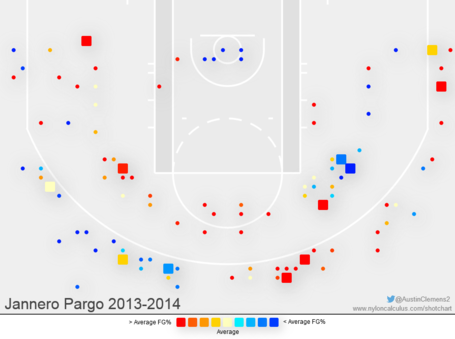 The stats above show that Pargo really didn’t have to play much last year. Basically, there were three situations when Coach Clifford called his number:

In situations one and two, Pargo was always quick to make sure he got his own shot (for the year he had a 28.4 percent usage rate, meaning he finished almost one third of Charlotte’s offensive possessions). Due to below average handles and a lack of quickness, Pargo relies on a very reliable jump shot with a quick release to generate offense.

This probably explains why 94 percent of his shots were taken at least 10 feet from the basket last year (with 50 percent coming from 3-point range). Despite his reputation as a gunslinger, Pargo has shown the ability to run the pick and roll and actually finished last season with an assist ratio of 40 percent, which means when he was on the floor he accounted for almost half the team’s assists. That number would have been fourth in the league behind Chris Paul, Kendall Marshall, and John Wall.

Unfortunately for Charlotte, situation number three happened. Kemba missed seven games with a twisted ankle, which forced Ramon Sessions into the starting role and Pargo into the back up spot. However, fortunately for Charlotte, both guards played very well and the team was able to go 4-3, beating the Toronto Raptors, Los Angeles Clippers, Denver Nuggets, and Los Angeles Lakers. Although Session’s solid play during that stretch stole the spotlight, Pargo was quite good in the reserve role as well.  Below are his stats for those seven games:

Although the coaches are praying they only have to use Jannero during blowouts, he proved last year that he can be trusted to step up and help the team win games.

It’s always difficult to predict what will happen with the players sitting at the end of the bench, but with Pargo, it’s safe to expect exactly what he brought last year: jump shots, a few more jump shots, an occasional swing pass, and more jump shots. Although the team has been very vocal about the desire to add more shooting to lineups that feature Al Jefferson, it's unlikely that Jannero will be used as a situational three point specialist. Therefore, it's probable that he’ll only play in the event of an injury or a blowout. Off the court, he'll continue to be a role model for the team’s younger players.

Personally, I’m very glad that Pargo signed another one-year deal with the team and I feel good knowing the team has a competent third point guard who can chip in if the worst happens.

All Stats via NBA.com and Basketball Reference.