Gary Neal finds himself in a crowded shooting guard rotation. But he has one thing the other guys don't: deep playoff experience.

When evaluating role players in the NBA, one good place to start is to ask whether the role player actually knows their role. It seems obvious, but often role players don’t do what their team needs from them. So, to preview Gary Neal, we first need to establish what his role will be with this coming version of the Hornets.

According to ESPN’s Real Plus-Minus, Neal was the 72nd-best shooting guard last season, although "best" is a relative term. His mark of -4.43 means that the Bucks and Hornets were 4.43 points per 100 possessions worse with Neal on the court. He was positive on the offensive end, with a 0.49 Offensive Regularized Plus-Minus (ORPM). However, his awful -4.43 mark on the defensive side was troubling, especially as 3-and-D guys become more and more important in the league. Any hope that Neal could become a Danny Green-type player for the Hornets is dependent on him developing the defensive side of that player type.

However, defensive players, especially on the perimeter, can be hidden in a good defensive system. Steve Clifford certainly has one of those. And if the Hornets can do without the "D" part of the 3-and-D, then surely Neal can be the "3" part of it, right? If so, Charlotte has to encourage him to reverse trends set forth in his 22 games with them.

And it’s not like he wasn’t hitting them and thus lacked confidence. Although he didn’t take as many 3-pointers as his first couple seasons, his 3-point percentage was at an impressive .406. He’s a threat from the perimeter; the Hornets just need to get him in positions where he can maximize that skill. Look at the difference between his shot charts in his first season in the league and last year. 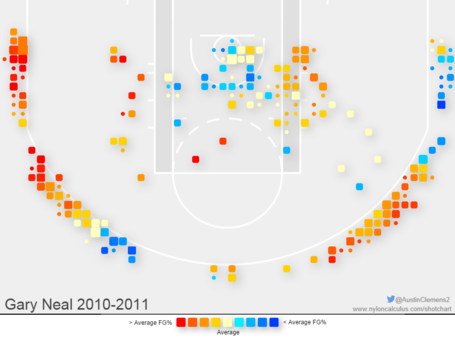 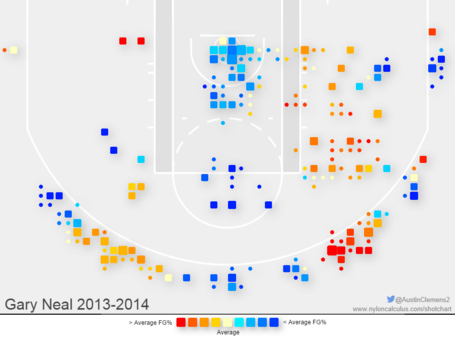 The first chart is someone who knows his role. The Hornets need that Gary Neal.

When Neal was shipped from Milwaukee to Charlotte last season, he immediately became one of the Hornets best 3-point threats and got playing time because of that. What was a very shallow spot for the Hornets a year ago, however, is now a position of depth. With the Hornets signing Lance Stephenson in free agency and drafting sharpshooter P.J. Hairston in June, Neal will have to earn his playing time this year. It’s possible he could quickly become the 4th or 5th guard — if so, he will need to make the most of what playing time he gets and prove to the coaching staff he deserves to be out there.

While the Hornets have brought in more perimeters shooters this season, none of them have the experience that Neal brings. It wasn't too long ago that he was hitting BIG shots for the Spurs in the playoffs.

While Neal might have the least natural talent of the Hornets shooting guards, his experience and confidence in big moments is where he can find value. The Spurs have been very successful in recent playoff series because of guys like Neal and Danny Green — guys who can punish defenses when they collapse on Tim Duncan.

The Hornets will need that same punisher in fourth quarters when teams are throwing double teams at Al Jefferson. If Neal is unsure of his role, his value is limited. If Clifford empowers him as a clutch 3-point shooter off the bench during important times, Neal becomes very important to this Hornets team.

Neal's floor for next year is low, but that isn't a knock on his talent — it's more a testament to the increasing depth the Hornets have on the perimeter. If P.J. Hairston is anything, he's a fearless shooter. The Hornets likely have more confidence at this point in Neal taking clutch 3-pointers, but that could change quickly if he keeps up the trend discussed earlier of not shooting.

At minimum, Neal will likely be a calming presence in the locker room to some of the Hornets' young guys. They tasted the playoffs last year, but they don't have anywhere near the experience Neal has, making deep playoff runs with the Spurs his first three seasons. Neal will be a steady force for Charlotte — whether that manifests in the locker room or on the court remains to be seen.

What We Should Expect

History says (more on this in Hairston's player preview) that we shouldn't expect elite play from a rookie on the perimeter, especially a late first round pick. Neal showed in San Antonio that he could adapt to a defensive system, and Clifford will certainly be looking for that this season. If so, Neal should be Charlotte's most steady long distance threat throughout the course of the season.

Other than defense, Neal will have to post better numbers with Jefferson and Kemba Walker. Last year they were both worse with Neal on the floor.

PPP = point per possession, PPS = point per shot, TS% = true shooting percentage, USG% = percent of plays completed by player while on the floor

Neal came to Charlotte in the middle of the year, so it's likely that an offseason developing chemistry with Kemba and Jefferson will help. It's not too troubling that he struggled in the top unit, and judgment should be reserved for this upcoming season. However, the data will have to correct itself, or Neal will have difficulty finding time on the court.

Neal averaged 23 minutes per game in his short stint with Charlotte last season, and while that might go down because of Stephenson's entrance, look for Neal in the important games. He's not afraid to take and make big shots. And that's something the Hornets need if they want to be taken seriously as a true contender and go beyond the first round of the playoffs.