What can we expect from the Hornets' new backup point guard? Kemba Walker Lite, it turns out.

Before sitting down to write this article, I asked people on Twitter to send me the first thing they thought of when they heard the name "Brian Roberts". One commented on his height. Another said, "Brian who?" Three commented on the baseball player Brian Roberts and were later shocked to realize there is a Brian Roberts who plays basketball.

It's only appropriate for the newest Hornets point guard, someone who has never really been in the national spotlight. Coming into this season, he had spent more years playing in Europe (three) than the NBA (two). Given an opportunity last year when Jrue Holiday suffered a season-ending injury, Brian Roberts took over the starting job and filled in admirably. He averaged 12 points and four assists as a starter. During the season, he had a 16.1 PER, shot 36 percent from three and led the NBA in free throw shooting with a mark of 94 percent from the line.

For those curious, Roberts’ 36 percent from three would have been sixth best on the team last year. But three of the five players who had a higher three point percentage (Anthony Tolliver, Chris Douglas-Roberts and Josh McRoberts) are now gone. 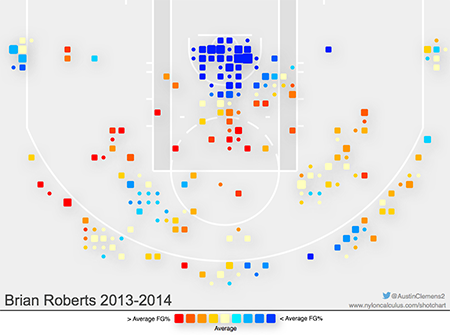 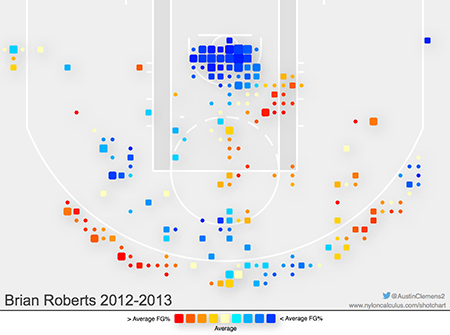 Roberts is a direct replacement for Luke Ridnour. Roberts did play in more games than Ridnour last year, and he is an improvement in most statistical categories (FG%, 3P%, FT%, assists, steals, points). Ridnour also finished last season with a PER of 8.3, nearly half of Roberts’.

The good news is that Roberts is a fine shooter and capable backup, which is excellent for when Kemba Walker needs a rest. There is even a chance that the two could see the floor at the same time, which would allow Kemba to work off the ball. Unfortunately, the size of the two guards (both are listed at 6’1") makes that unlikely.

The bad news is that what you see is what you get with Roberts. He is not the best creator on offense and, more worryingly, he can be a liability on defense. If there’s anyone who could fix that problem, you could argue it would be Steve Clifford, but it’s still something to keep an eye on. Finally, where Roberts is right now could very well be his ceiling. This season marks his third in the Association, but he is already 28 years old.

To summarize, here is what you can expect from Brian Roberts: He's a reliable backup to Walker, he can get points off the bench and perhaps come in the game late to sink a few free throws. If he plays with the starters, he will be another shooter to help spread the floor for Big Al. If he plays with the backups, he will be a player who will be able to put up points if needed. When you think of Roberts, think Kemba Walker Lite. Roberts is a quality depth signing and a player who has gone from playing for the Hornets to the Pelicans and back to the Hornets in a three-year span. Hopefully, he sticks around with the Hornets for a little while longer this time around.