What should the Hornets do with Bismack Biyombo?

The Hornets drafted Bismack Biyombo way back in 2011. As his rookie contract comes close to its end, and with the team finally having an identity, they need to decide what to do with the big man.

Share All sharing options for: What should the Hornets do with Bismack Biyombo?

The upcoming NBA season is the final year on Biyombo's contract. While it's a little early to be thinking about this, it's a legitimate question to wonder if he has earned himself an extension. Has there been any real progress? If there has been, is it enough to justify a new contract? What does he need to do this season? All of these are questions that have to be answered.

The first thing the Hornets will look at is, most likely, his year by year progress. Do we see improvement with Biyombo? Well, sort of. Anybody that has watched Biyombo would answer this with a resounding yes. He's a massively improved player from the project that was drafted way back in 2011. Every year, Biyombo has improved on the defensive end of the ball. Last year was arguably Biyombo's best year in the NBA. Defensively, teams only shot 51 percent at the rim when Biyombo was on the floor (hat tip to Sam Vecenie), and he had a career high in rebounds on a per 36 minute basis. He even improved on offense to a point where he wasn't a total liability.

But here's where things get murky. While last season was certainly a great year for the big man, there's a very big asterisk next to it. He played in a reduced role with a career low 13.9 minutes per game. That role reduction is why his field goal percentage was a career high 61 percent. When he's only attempting one or two shots a game, he's gonna make sure those shots count. This isn't a bad thing, but it shows that his jump in improvement isn't as large as we'd like to believe.

Steve Clifford is a great coach -- one of the best in the NBA in my opinion. He can take a player's talents and play them in a way that maximizes those talents. We saw that last year when Clifford took Biyombo's two skills, defense and rebounding, and carved out a role where he only had to do those two things. As a result, Biyombo thrived.

To answer the original question, Biyombo has certainly improved over the years. Now the question becomes, has he improved at enough of a rate to make the Hornets want to buy in on this continued project?

While Biyombo's good traits are well noted, he still has plenty of bad ones. His biggest weakness, and a huge problem for Charlotte, is that whenever Biyombo is on the floor, the team is essentially playing four on five on offense. It's been that way since his rookie year, and it's still that way today. He's improved offensively, but not enough. Right now, he's a hustle guy on offense. Running around off the ball, grabbing rebounds, setting picks, and making highlight plays. While players can find a niche doing this in the NBA, it's still very difficult to justify playing four on five for extended periods of time. 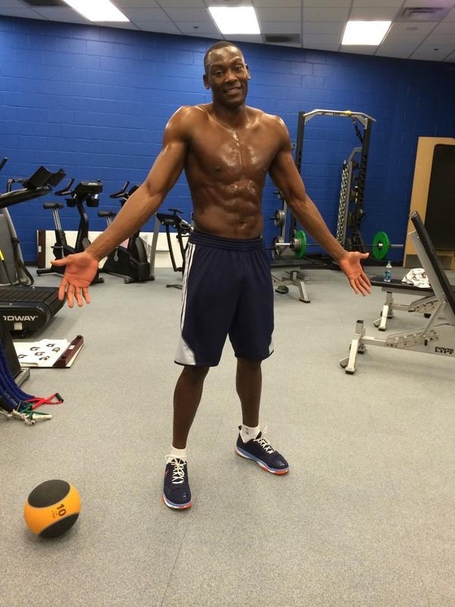 Right now, it's impossible to guarantee that Biyombo gets a contract extension. Not only because it's early, but because his status with the team is likely up in the air. He doesn't bring enough to the team to justify a guaranteed contract extension. The best way for Biyombo to earn an extension is to continue to improve, especially on the offensive end of the ball. He's already good at rebounding and defense; he has to become great at them. That, or he has to improve on offense to the point where his very existence on the court no longer limits the Hornets' offensive opportunities.

Maybe then he'll earn that contract extension he wants.